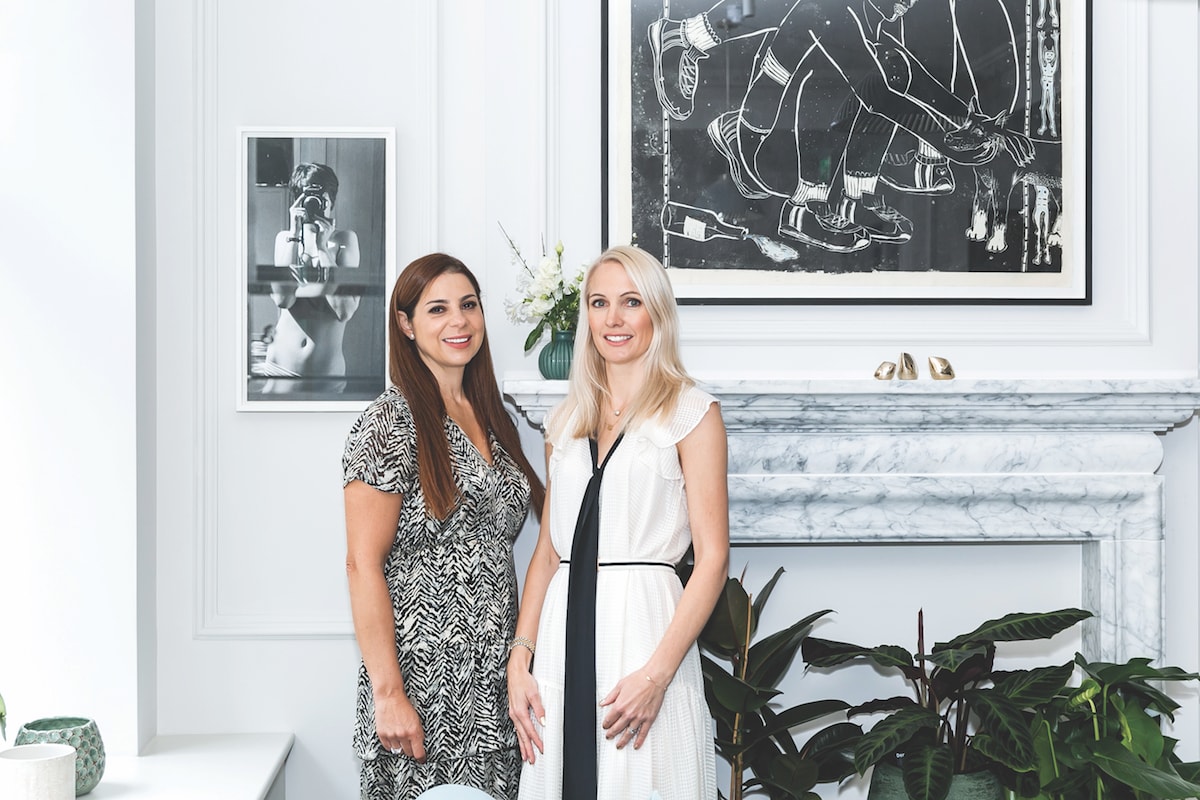 Their first club made history when it opened on International Women’s Day in 2018, becoming Britain’s first ever women-only members’ club. Designed to foster creative collaboration between professional women of all ages and stages, their London clubs have become havens for working women, but it doesn’t stop there. The Glossary meets the co-founders behind the unique networking concept that’s now expanding across the pond

On a quiet passage off London’s Oxford Street lies a Georgian townhouse, five storeys high with a plain, black door and Virginia Woolf’s famous quote, “A woman must have money and a room of her own”, embossed on the window. The powerful idiom is a nod to Woolf’s progressive ideals, as at this women-only members’ club – the first of its kind in the UK – CEOs, entrepreneurs, artists and scientists are convening, collaborating and essentially redefining the landscape for Britain’s female leaders. For as well as offering a tranquil haven for working women, complete with cocktail bar, cafe, cinema and beauty salon, this club provides an extensive programme of events where members can network across industries, facilitating the founders’ ultimate aim of giving female leaders the necessary connections, skills and confidence they need to thrive. Welcome to The AllBright. “There’s a special place in hell for women who don’t help other women”: so goes the quote from American politician and diplomat Madeleine Albright, which became the inspiration for the club’s name. “When we started to think about the brand we wanted to build, we realised we loved the notion of ‘AllBright’ being a beacon for celebrating women,’’ explains Anna Jones. The former CEO of Hearst Magazines UK, she co-founded the club alongside Debbie Wosskow OBE, a serial entrepreneur who recently sold her business, Love Home Swap (a house-swapping business inspired by the film The Holiday) for £40 million. “The buildings stand for something above and beyond just bricks and mortar,” Wosskow agrees.

The two were introduced at a party in 2015 and instantly gelled, largely over their shared experiences of being senior women in business. “We sat and chatted, and had this common bonding passion point around empowering women,” says Jones. “When we started digging into the stats, we found out only one in 10 women start their own business, and then only 2% of capital goes to female-owned businesses – and in corporates, only 1-6% of leadership roles are held by women. Women are better educated and half say they want to get a leadership role, then after working for a couple of years that number is crushed down to 16%. So we thought; what can we do to help those incredible, ambitious, well-educated, kickass women?” The answer was to establish AllBright, an education, networking and funding collective to support women like them.

“The club is about celebrating women and being a working woman”

Timing was serendipitous for Wosskow, who was looking for a new venture, but Jones had to make the decision to leave her coveted role at Hearst. “I always had an entrepreneurial itch and when we started to imagine an opportunity for a business that convened and championed women, the pull became too strong and I decided to make the leap.”

The first manifestation of the project, a fund that backed female founders, was succeeded by FoundHER, a festival for working women, which last summer featured talks from the likes of Trinny Woodall, Gina Miller and Dr Helen Pankhurst. “Feedback from the festival was that the content was fantastic, but what attendees really loved was to have so many women together. Off the back of that, Debbie and I started thinking, ‘Wouldn’t it be amazing to have somewhere you can do that every day?’”

So the pair decided to create a multi-purpose space for working women, by working women, with the aim of making the UK a better place to be a working woman. “We wanted to create a new ecosystem of capital, connections and confidence for women – the things that men have in abundance,” says Wosskow. After pulling together a management and events team from Soho House, The Devonshire Club, The Arts Club and The Club at The Ivy, The AllBright Rathbone opened its doors last year on 8 March, International Women’s Day. The location was chosen to celebrate the ‘Bloomsbury set’, with each floor named after a key member (Lopokova, Morell, Bell, Woolf and West). Members have access to the entire space, which has been impeccably designed in a way that feels suitably modern. “We wanted to do something very classic and comfortable and that felt unique to us, but wasn’t girly,” says Jones. “People come here and are quite surprised. There’s no millennial pink – we’ve tried to come up with something quite grown-up and classic.”

And it’s worked: the elegant interior is dotted with brass accents, marble, bold geometric prints, plush velvet furniture and standout vintage pieces. The colour palette veers from dark to light in response to how the floors are used: the top-floor cocktail bar envelops members in a deep inky-blue palette, clean white and grey walls on the lower floors creates a calm environment for work, while the Powder & Bloom beauty salon is bathed in a comforting warm glow.

It’s a similar story in their second club, The AllBright Mayfair, which opened on Mayfair’s Maddox Street in May 2019. At 12,000 square feet, the Mayfair club is almost three times larger than its predecessor, complete with a floor dedicated to events; a wellness area and fitness studio; two roof terraces; plus an 80-seat restaurant. Catering at both clubs is headed up by Executive Chef Sabrina Gidda, who competed in the BBC’s Great British Menu.

When it came to sourcing the furniture and accessories, female designers and businesses were also prioritised. At the original club in Fitzrovia, pieces were pulled from Sigmar, Béton Brut and Willer, while the interiors at the Mayfair club were led by the in-demand designer Suzy Hoodless, who created a space filled with clean lines and nods to the exquisite tailoring of nearby Savile Row. The art displayed in both clubs – curated by Beth Greenacre, who looked after David Bowie’s art collection – features only women and includes works by Tracey Emin, Diane Arbus and Gillian Wearing. “The walls are full of female artists, the food is made by women, the wine is sourced from female-run vineyards – these clubs areabout celebrating women and being a working woman,” says Jones.

It can come as a surprise then, that men are not only allowed in the club (as guests when accompanied by a woman), but are active in its operation. They include Lord Davies, the former banker and ex-Chime Communications chairman who was one of the club’s angel investors, and Allan Leighton, former CEO of Asda, who was appointed non-executive chairman in 2018. Jones and Wosskow have encountered their share of gender-based discrimination in their careers, referred to as “totty” in investment meetings, for instance – comments that merely scratch the surface of the issues facing women in the workplace. Nonetheless, the pair are adamant that being “anti-men” is not conducive to helping women. “Tackling a lack of diversity in leadership roles is complex and not just about combatting sexism, which obviously needs to be challenged,” says Jones. “I’ve always felt well supported by women and men around me in the roles I’ve had… at The AllBright, we’re focusing on why women are amazing, and bringing enlightened men along.”

The AllBright certainly seems to have struck a chord with women in London and Los Angeles (where their first international club will be opening this summer), with 800 founder members (including Olivia Wilde, Naomie Harris, Ruth Wilson, Martha Lane-Fox, Mary Katrantzou and Margot James MP), and a waiting list that runs into the thousands. “As we bring people in from the waiting list, we’re making sure we get a balance of ages and industries,” says Jones. This includes a discounted rate for under thirties, to ensure accessibility to women at the early stages of their career. “Say you’re a CEO, you might be chatting with an artist, PR consultant, coach, teacher or lawyer… we’re really seeing some fabulous relationships develop in the club. The other week this woman stopped me and said, ‘I’d just like to say, I’ve been a consultant for 10 years and I’ve just written my first book. I had no idea how to navigate getting it published, and I’ve met a literary agent here.”

The clubs are now set to make a move across the pond, with their LA branch, on Melrose Avenue, launching this summer. Plans for further US expansion are underway, with clubs slated to open in New York and Washington DC in 2020. Expanding internationally and opening three more clubs abroad may seem like enough to keep the pair busy – but not the Jones-Wosskow powerhouse. Alongside this they also run their successful AllBright Academy, which offers free digital programmes designed to help early-day female business founders in their careers, instruct female executives on how to “smash the glass ceiling” and guide women looking to go freelance or work more flexibly. “Once they have completed their course, graduates go into an alumni group housed on our exclusive app, AllBright Connect,to help expand their networks and be inspired,” says Jones. “We want as many women as possible to be able to go through the Academy – it’s a game changer.” And if anyone knows how to change the game, they do.

Anna Jones and Debbie Wosskow OBE, give their top tips for women in business

Be prepared to graft

It’s one per cent inspiration, 99 per cent perspiration. People have said to us, “Oh, I had that idea”, but to actually execute it is a different thing.

Be professional at work

Even if you’re having a hard time in your personal life, don’t bring it in to work. Do I believe in being an authentic person? Absolutely. But authentically professional – that gets you far.

Women often downplay their achievements. It’s okay to say you ran this project and it went really well, as opposed to being flippant or bashful. Society conditions women to be self-effacing and to not celebrate their achievements.

Put your hand up

You’re then seen as someone who is a fixer and a doer. And think of your reputation: communicate, be open and be honest.

The best business advice I have been given is to tune in carefully to your instincts – both on people and deals.

I really believe that time to yourself – to meditate, exercise or just have some peace – makes a huge difference to your day. I have two children aged nine and five, so I get up 45 minutes before my family. It’s my time to do Pilates and get myself dressed before the mayhem of breakfast and the school run.

Give yourself time and space to think. Then write down a series of goals. Put a time frame on them and think about how you can achieve them. Then make yourself accountable: tap into your work sisterhood and share your goals.

Decide where your own line in the sand is and be prepared to say ‘no’ and explain why if people are making unreasonable or unrealistic demands on you. It will help keep your life balanced and prevent you from burnout.

Be kind to yourself

Turn off that inner critic and instead talk to yourself the way you would a friend. It’s our job to be our own personal champions.

Never take no for an answer

There’s often another way around the problem. Attack it from a different angle, try again at a different time. Don’t accept your first no.

Lean on your sisterhood

There’s no need to shoulder all of life’s burdens alone; it is actually a sign of strength to lean on allies in times of need. Build up these networks and support others, so that in times of need you have your sisterhood to hand.