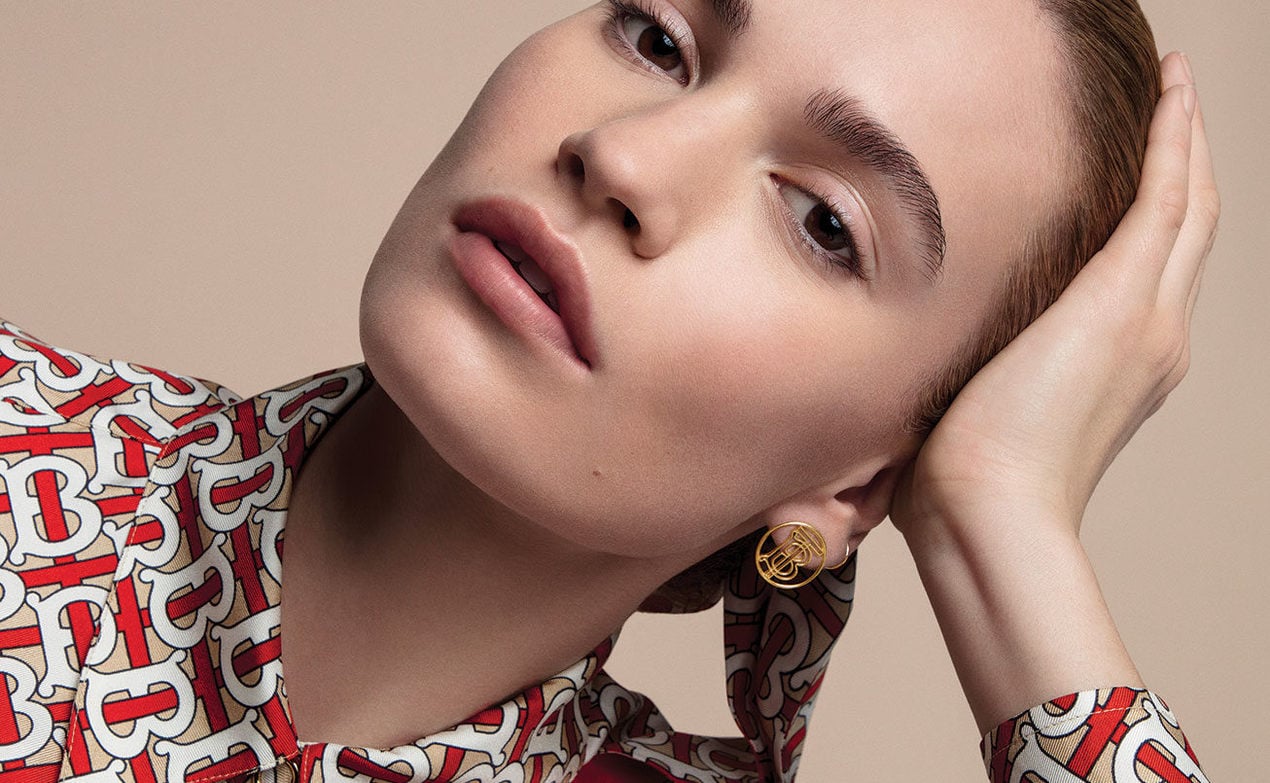 She’s played the fairytale heroine with aplomb, but Lily James is done with typecasting. Here, the British actress opens up about her family, the future, and finding new roles.

“I think I have much more to offer than being confined to the ‘romantic girl’ box. I have many different sides to my personality: I can get angry quite easily if things bother me…” Lily James is talking typecasting. The actress — whose career, she admits, has at times left her feeling “persecuted by corsets” — is keen to “express my many different sides, in all sorts of characters.” She has certainly found the answer in Rebecca, the highly anticipated film adaptation of Daphne du Maurier’s 1938 gothic masterpiece, due for release later this year.

James plays Mrs de Winter, alongside Armie Hammer as her aristocratic husband Maxim, in the Netflix production, which follows the couple as they start married life at the bleak Cornish estate of Manderley, overseen by forbidding housekeeper Mrs Danvers, brilliantly depicted by Kristin Scott Thomas. With a screenplay by Jane Goldman and Ben Wheatley directing, it looks set to captivate audiences every bit as much as Alfred Hitchcock’s Academy Award-winning take on the novel, starring Laurence Olivier and Joan Fontaine. “I’m passionate about the story,” says James. “That’s all I’m thinking, dreaming and talking about at the moment. Hitchcock has done it and now we’re doing it again, with a fresh outlook.”

“Although I was very intent on staying as close to the book as I can,” she continues, “at the same time we had to let it take flight and see what it was going to be, taking it moment by moment. I’ve read the book seven or eight times, I feel like the character is so precious to me.” Married to a man who turns out to be as cold as he is rich, and haunted by constant reminders of her husband’s deceased first spouse (the eponymous Rebecca), the young Mrs de Winter is lonely, unhappy and scared. It was a situation that James did not take lightly. “I found it hard to let go of the character,” she explains. “She’s really bullied and gas-lighted, and lives in a difficult headspace. I kept having panic attacks after it finished; I couldn’t shake it off.”

Such dedication is typical of James. Though she appeared in Secret Diary of a Call Girl, the television drama based on the real-life adventures of Belle de Jour, it was playing the spirited Lady Rose in Downton Abbey a year later that catapulted her into the spotlight (“that show enabled me to be seen more – and that’s all you really want as an actor, to be able to be seen”), going on to make some 20 films in under a decade — all before reaching the age of 30, last year. But, like many young actresses who arrive on the scene by way of the period drama, James’ English rose sensibilities made the threat of being typecast almost inevitable. A big-budget remake of Disney classic Cinderella, plus Pride and Prejudice and Zombies, a War and Peace TV series and the World War II romance The Exception soon followed, causing James to feel “stressed out” she was only being offered certain roles.

“When I was working with Kenneth Branagh on Cinderella, he told me to be patient and that I had a long career ahead of me and that the opportunities will open up in time. So that advice keeps me from getting upset or worrying too much about being typecast,” she says. Branagh’s sage words proved to be true and James has since shied away from expectations. She’s starred in ABBA singalong smash hit Mamma Mia! Here We Go Again and Danny Boyle’s Beatles-themed rom-com Yesterday, had a starring role in Billie Piper’s directorial debut Rare Beasts, and appeared on stage to critical acclaim in All About Eve, alongside Gillian Anderson. “I played a dark, angry, pathological liar for 14 weeks, eight times per week,” she smiles. Not to mention appearing in lucrative beauty campaigns for Burberry. “I must enjoy it because I can’t seem to help myself,” she laughs. “I know I’ll have to slow down soon because it is a strain on your personal life. But when you have the chance to do a film like Mamma Mia! and work with Meryl Streep and actors of that calibre, you simply have to take those opportunities.”

James, it seems, has accepted the pressures of the industry with a steeliness beyond her years, her vivacious persona belying any anxiety or stress caused by the red-carpet rollercoaster of fame. Not least when it comes to her long-term relationship with former Dr Who star Matt Smith. Having met on the set of Pride and Prejudice and Zombies, the pair’s hectic work schedules proved too much in 2019, and they went their separate ways after five years together.

While Smith is rumoured to have grown close to Claire Foy, his co-star in The Crown, James has been seen on the arm of rising star Max Ianeselli. It’s a matter on which she will not be drawn. “Sometimes it’s odd to see photos taken of you by the paparazzi when you had no idea you were being photographed,” she concedes. “It’s also difficult to be away from home a lot,” she continues. “I had to give away my cat a while ago, even though I was obsessed with it. But I was never home, and the cat was pissing everywhere. But I still see her when I visit the friend I gave her to.”

Home these days may be London, but James often refers to her down-to-earth upbringing in Esher, Surrey, where she was the middle child of two brothers, Sam and Charlie. “It was wonderful to live in the countryside where the pace of life was a little slower and the air was so fresh,” she says. “It’s very different from living in the city. I went to a fantastic school where I felt secure and relaxed. It was a bit like living in a bubble; very beautiful, but still a bubble.”  James’s pride in her family is well evidenced, not least in her decision to take her father James Thomson’s name as her professional surname. Though he died aged 54 from cancer, when James was just 18, he remains her “biggest inspiration”. “My dad did a lot of things,” she reminisces. “In addition to being an actor, he was a musician and an entrepreneur. He was also a great thinker and had an analytic mind, as well as being very spiritual. He always encouraged me to be curious and to discover things on my own. I’m very curious about human psychology; acting requires you to be constantly trying to understand your character’s personality, their thinking and motivations.”

Performing stole James’s heart from an early age and, after a stint at Tring Park School for the Performing Arts, she went to the Guildhall School of Music and Drama, which counts Ewan McGregor, Jodie Whittaker, Michelle Dockery and Daniel Craig among its alumni. “I’m an actress mainly because my grandmother [Helen Horton, who lent her voice to the spaceship ‘Mother’ in Ridley Scott’s sci-fi classic Alien] and my father did the same job,” she continues. “I’ve always loved to perform — I have it in my blood. My father was an actor when he was in his early 20s, and he even lived on Sunset Boulevard in Los Angeles. One of my uncles was also an actor; you could say that I come from a family of artists.”

Her mother, Ninette, is an equally close influence, and James credits her with holding the family together after the deaths of her father, uncle and grandmother, which happened in quick succession. “We often travel together when I’m promoting a film,” James explains. “She’s so supportive of me and whenever I feel down or a bit confused about work or life, I always know that I can call her. She’s a great listener and can usually get me to see problems from another perspective. It’s very reassuring to know that I’m able to rely on her advice.” So, too, her siblings. “I have a great relationship with my brothers now, but when I was younger I could be a real nightmare,” she laughs. “I fought with them all the time. I was a pretty big and tough girl and so I would always win our fights. They have supported me tirelessly, though. When I played in Chekhov’s The Seagull on stage, they saw the performance nine times. Charlie now lives in Australia, but he came to London for a week to see me in All about Eve.” And let’s not forget James’s tight circle of friends, who also keep her grounded; she even went backpacking around Asia with one friend, to help bring back a sense of reality post-Cinderella. “A lot of them find it funny because they’re used to seeing me wear jeans, Doc Martens, T-shirts and worn jumpers most of the time,” she smiles. “At premieres, I try to look sleek and sophisticated, but I don’t think I’m quite there yet. She’s being modest, of course. James is fast-becoming Hollywood’s golden girl, though she’s quick to credit her success to others. “I’ve learnt a great deal from working with so many exceptionally talented people and I am infinitely grateful for those experiences. They’ve changed my view of what it means to be a woman and an actress, and they’ve given me invaluable inspiration.

I still remember how on the set of Mamma Mia! I would stand speechless next to Meryl — it was amazing to see the kind of magic she creates.” “I feel like a sponge who gets to absorb all those incredible little secrets that are part of what makes those actors so great,” she continues. “I learnt so much from Cate Blanchett [who played James’s wicked stepmother in Cinderella] and how she has this extraordinary ability to act with her eyes.” Did Blanchett offer any career advice, I wonder. “She told me that I should try to find roles that frighten me because those are the experiences that will challenge you and make you a better actor. Those are also the roles that are going to make you a more interesting and enlightened individual.”

As for the future, it will be interesting to see if Lily James is tempted to follow the lead of some of her contemporaries, such as Emilia Clarke and Margot Robbie, who have set about producing female-orientated films. “I’ve been thinking about doing something similar for a long time now with a friend from drama school,” James says. “We want to find projects that we believe in and that we would want to be involved in from the idea to the finished film.” But for now, there’s Rebecca, which looks set to go stellar, taking its lead star with it. And yet, if I know anything about James, she won’t be letting the attention go to her head. “I think I’m the same person I’ve always been, except that I’ve been learning so much more about the world in general. All the travelling I’ve been able to do has helped me gain more perspective on things. I spent a lot of time daydreaming, though. I always had a romantic side; I still do.”