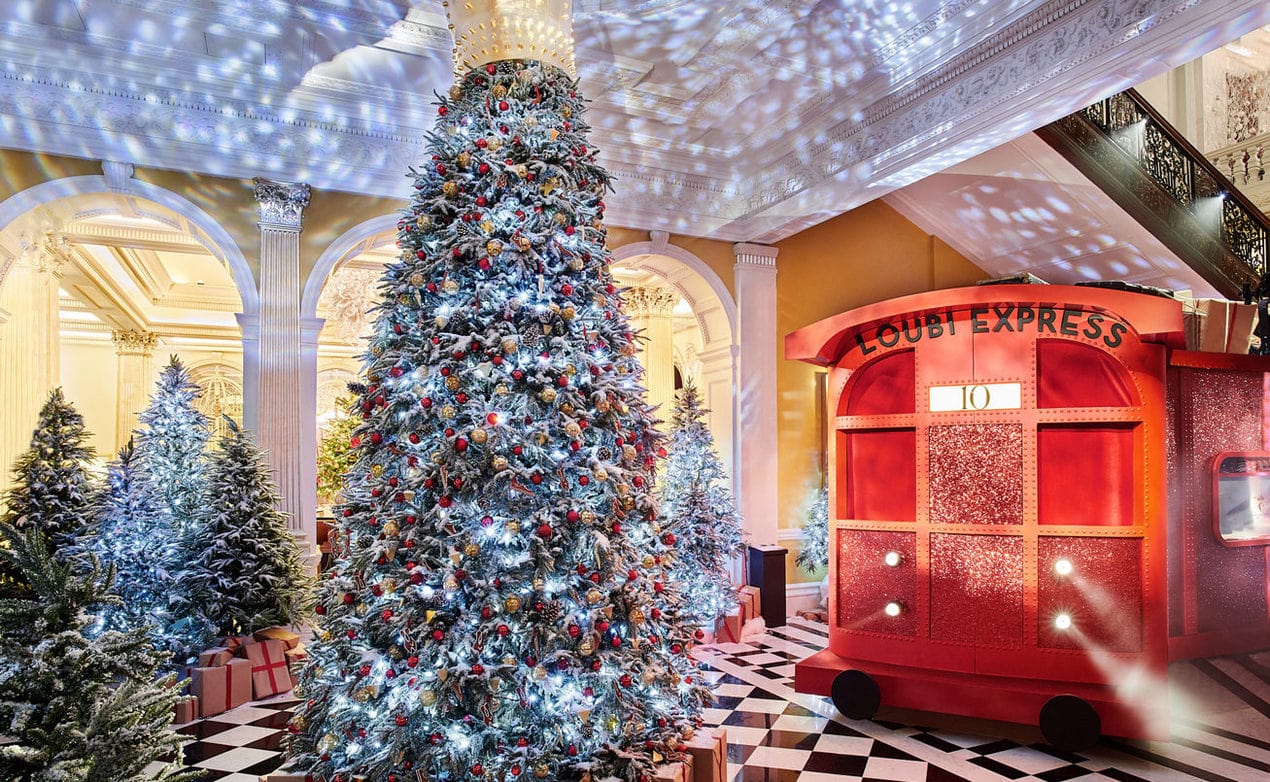 The best dressed festive firs across the capital

Each winter, London decks its halls and transforms into a twinkling wonderland where towering spruces take centre stage. This year, a score of fashion designers and artists are behind some of the most dazzling displays in London’s landmarks, hotels and venues. Bigger, better and more grandiose than before, here’s your guide to London’s best Christmas tree displays.

Each year Claridge’s asks a famous friend and long-time guest of the hotel to design its tremendous, towering Christmas tree. Walking in the footsteps of fashion icons Karl Lagerfeld and Diane von Furstenberg is beloved shoe designer Christian Louboutin. Adorned with sparkling fairy lights, gold and red baubles and stiletto-shaped gingerbread biscuits, this festive fir takes pride of place in the hotel’s grand entrance lobby, transformed into a snowy forest clearing for the festive season. 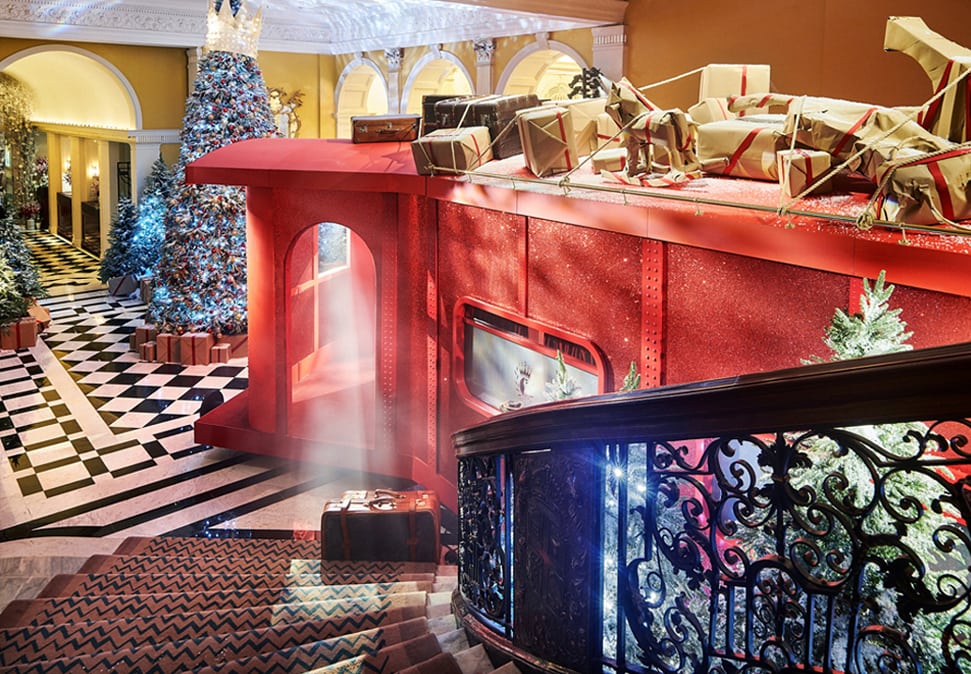 After marvelling at Louboutin’s elegant creation, step aboard the ‘Loubi Express’, a glittering red train from Paris boasting dozens of wrapped presents and an intimate dining carriage with four tables. Sip on a Louboutin-inspired cocktail, while savouring delicious Claridge’s canapés, set to a soundtrack of festive tunes. ‘The hotel is my second home when in London,’ said the French designer after the tree’s unveiling. ‘I am glad to bring a little piece of Paris to such an iconic London landmark. The idea of travel has always been a key source of inspiration in my work and I wanted to capture the excitement and romance of it.’
Claridge’s, Brook Street, Mayfair, W1K 4HR, claridges.co.uk 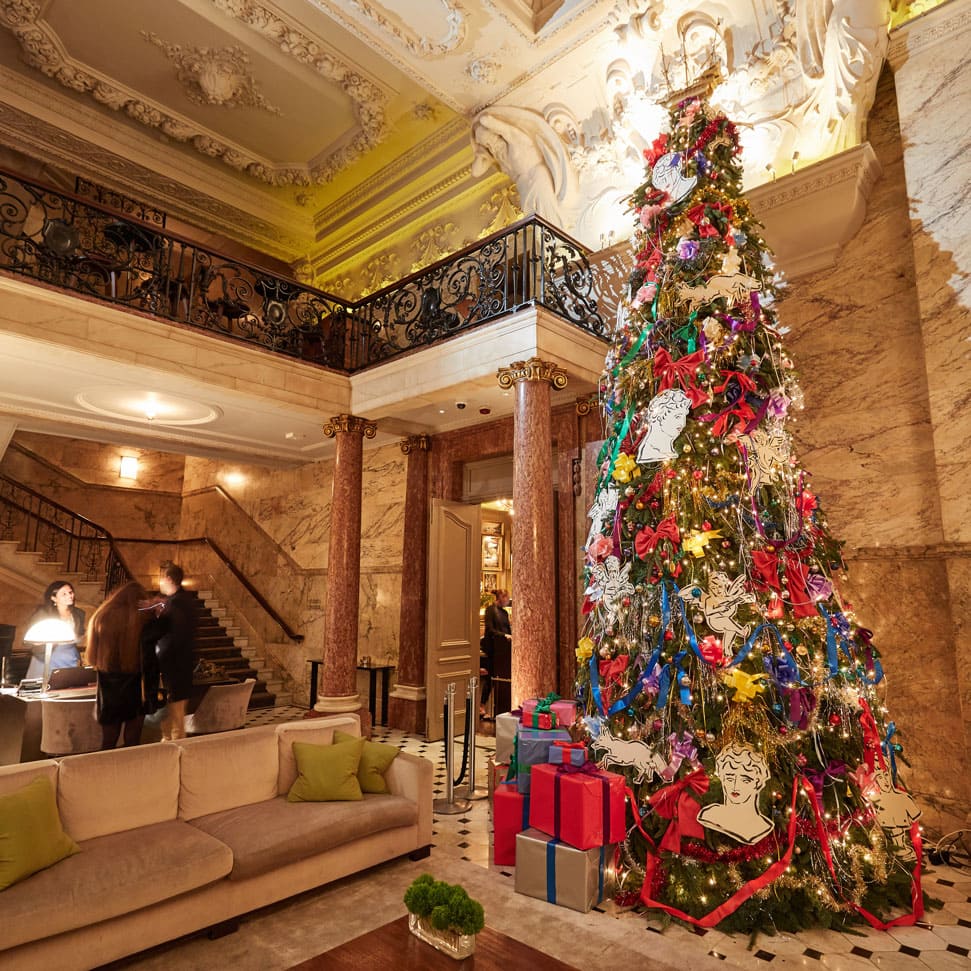 British artist and interior designer Luke Edward Hall — best known for his rainbow-hued, maximalist aesthetic — is the creative brains behind the eclectic tree at The London EDITION. Standing almost 20 feet tall in the hotel’s grand Georgian lobby, it is described by Hall as a ‘riot of colour’ which, he hopes, will ‘invoke the joy of Christmas in all its glittery, shimmering wonder’. In a nod to his signature style, the tree dazzles with hundreds of colourful lights, bows, tinsel, vintage baubles, oversized decorations and his own cut-out illustrations. One of London’s best Christmas tree displays, gaze upon it in child-like wonder and drift off into a magical dream. of London’s best Christmas tree displays.
The London EDITION, 10 Berners St, Fitzrovia, W1T 3NP, editionhotels.com

The magnificent tree in Sketch’s three-Michelin starred Lecture Room and Library comes courtesy of Ricky Jackson, creative director of Ricky Paul Flowers. Its lavish design is inspired by the opulence of the 18th-century royal court of Russia, where ‘Chinoiserie’ — a decorative style characterised by the use of Chinese motifs and techniques — was the height of aristocratic fashion. 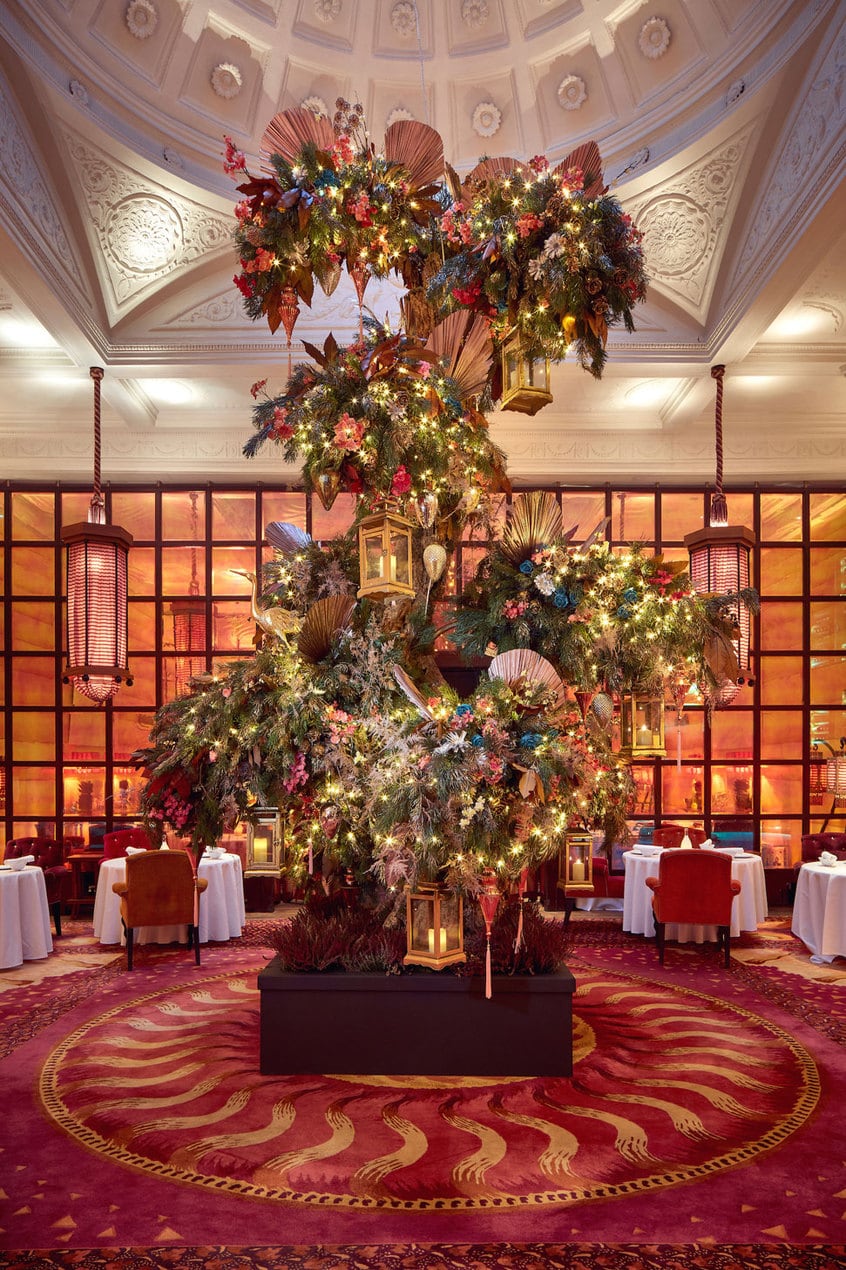 Jackson is one of 17 collaborators involved in Sketch’s festive makeover this year. Christmas Here, There and Everywhere – on display until 5 January – presents five dazzling installations, celebrating a diverse range of Christmas rituals, customs and symbols rooted in centuries-old traditions from all over the world. 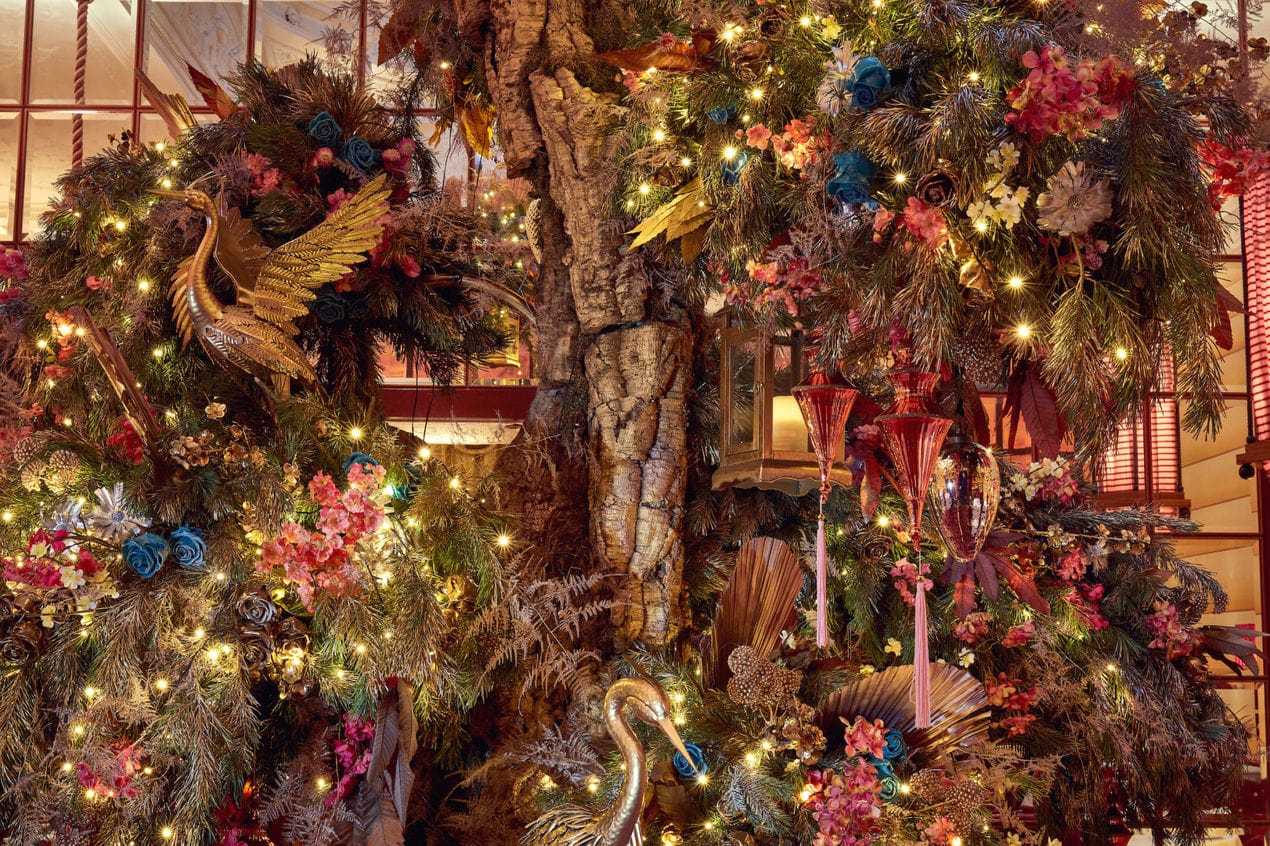 Strike a pose in front of the fairy-tale ‘Christmas Arcade’ at Sketch’s entrance, before enjoying the artworks on display, including A Storm in a tea cup, an enchanting floral installation by Figa & Co in the Glade.
Sketch, 9 Conduit St, Mayfair, W1S 2XG, sketch.london 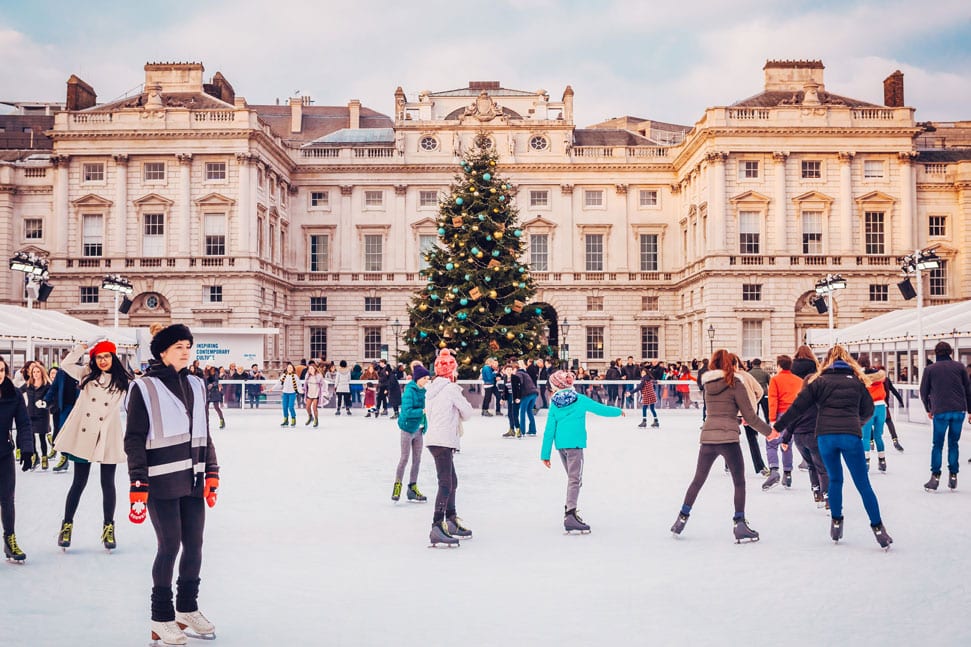 Hailed as one of the capital’s favourite winter experiences, Skate at Somerset House with Fortnum & Mason returns to London’s grandest, neoclassical courtyard for its 20th anniversary edition. Admire the glorious 40 ft tree, laden with Fortnum & Mason Christmas Hampers and giant baubles, before twirling on the ice, snuggling up in the alpine-inspired lodge — Bailey’s hot chocolate in hand — or mooching around the Fortnum’s Christmas Arcade. As the capital counts down to Christmas, there’s nowhere better to enjoy a healthy dose of festive cheer.
Somerset House, WC2R 1LA, somersethouse.org.uk

The Connaught by Sean Scully 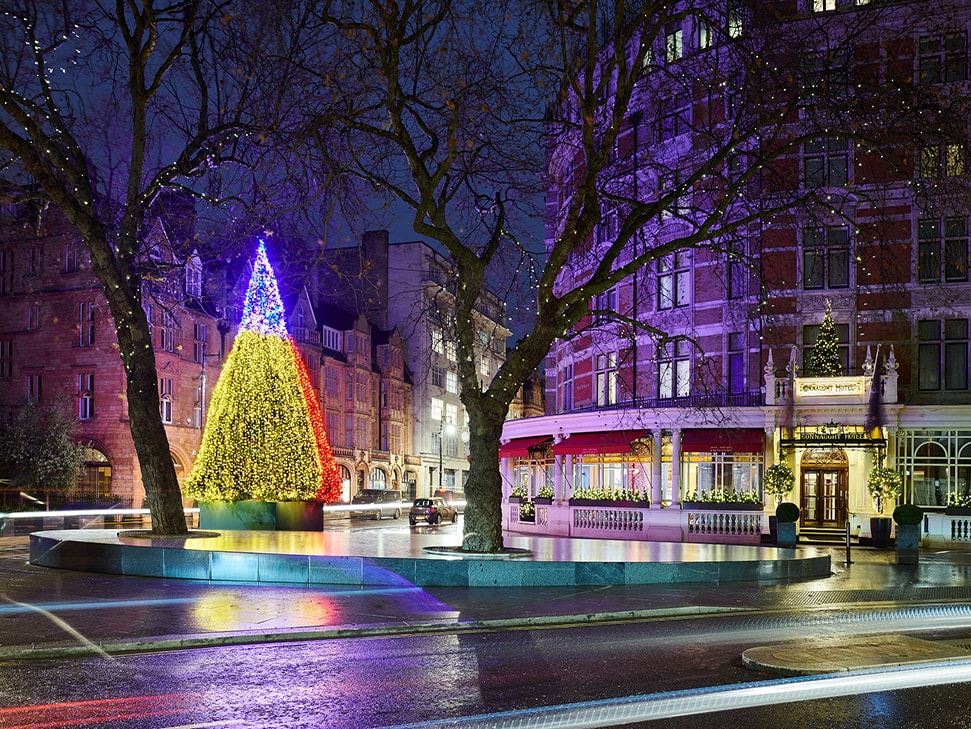 This year, the Connaught’s sparkling creation has been designed by the Irish-born, American-based artist Sean Scully, famous for his abstract painterly style and colour-block palette. Standing proud outside the hotel’s grand entrance, and beside the world-famous Tadao Ando fountain, this Norway Spruce dazzles in four distinct blocks of colour: blue, purple, red and yellow. Boasting in more than 25,000 light bulbs, the Connaught Tree – one of London’s best Christmas tree displays – will shine bright on Carlos Place until the first week of January, 2020.
The Connaught Hotel, Carlos Pl, Mayfair, W1K 2AL, the-connaught.co.uk

The Lanesborough Hotel by Ralph & Russo 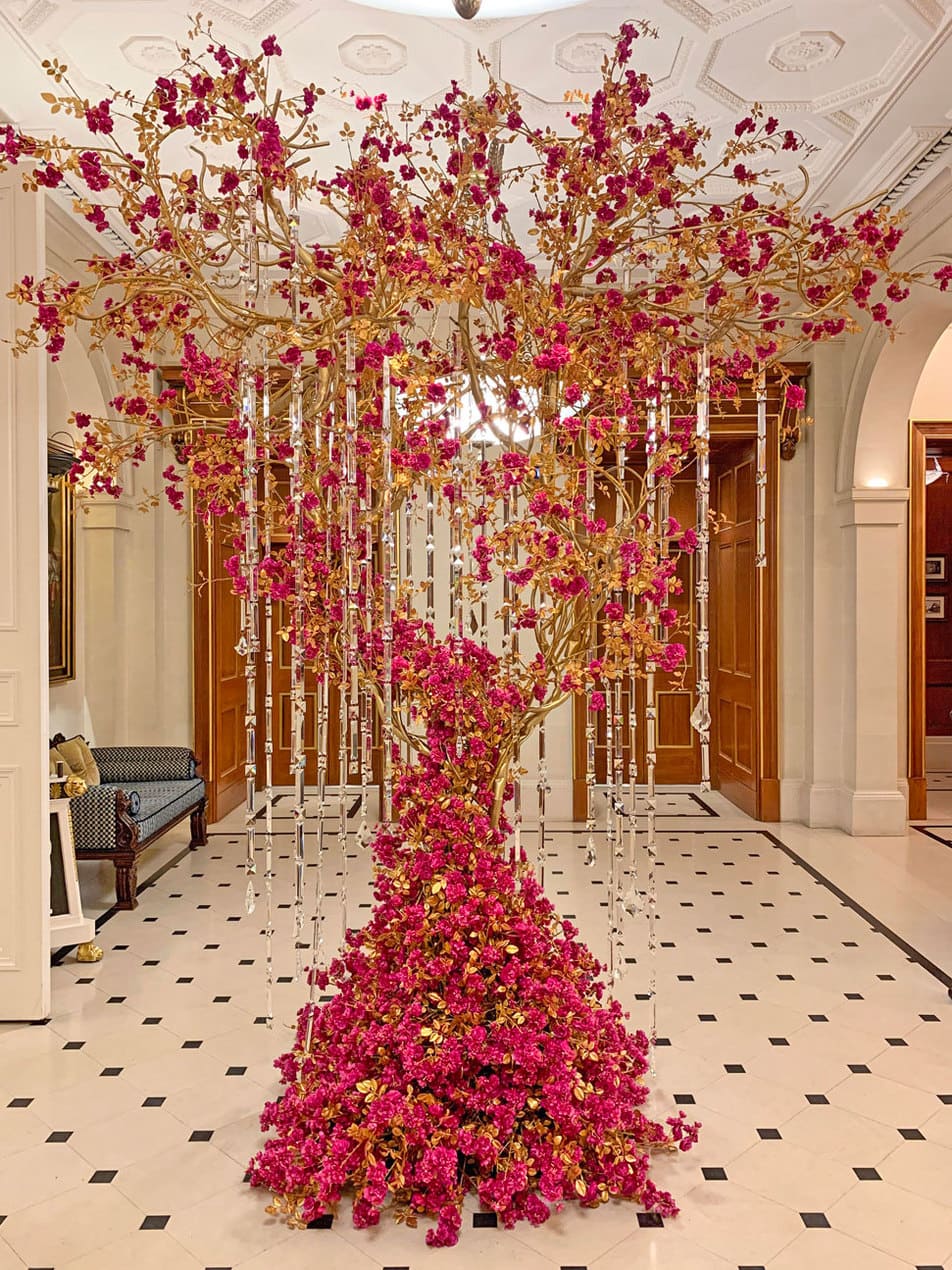 The Ralph & Russo Christmas tree installation at The Lanesborough brings to life the magic of couture, enchanting guests and visitors with its canopy of chandelier-like crystals, golden leaves and striking raspberry-hued silk petals. Its delicate design and ruby red palette are inspired by the British luxury brand’s A/W 19/20 collection. While you’re there, look out for Lilibet, the hotel’s much-loved feline resident, whose bespoke festive collar bears the logo of both brands.

Christmas at The Lanesborough is always a tremendous affair. In addition to its festive tree arrangement, the hotel offers a festive afternoon tea in the splendid setting of Céleste. For the first time since the hotel’s reopening in 2015, the wine cellar will be transformed into a luxurious Champagne Vault by Moet & Chandon. You can enjoy a unique private dining experience for up to 12 people in this winter oasis, featuring festive lighting and seasonal foliage.
The Lanesborough, Hyde Park Corner, SW1X 7TA, oetkercollection.com