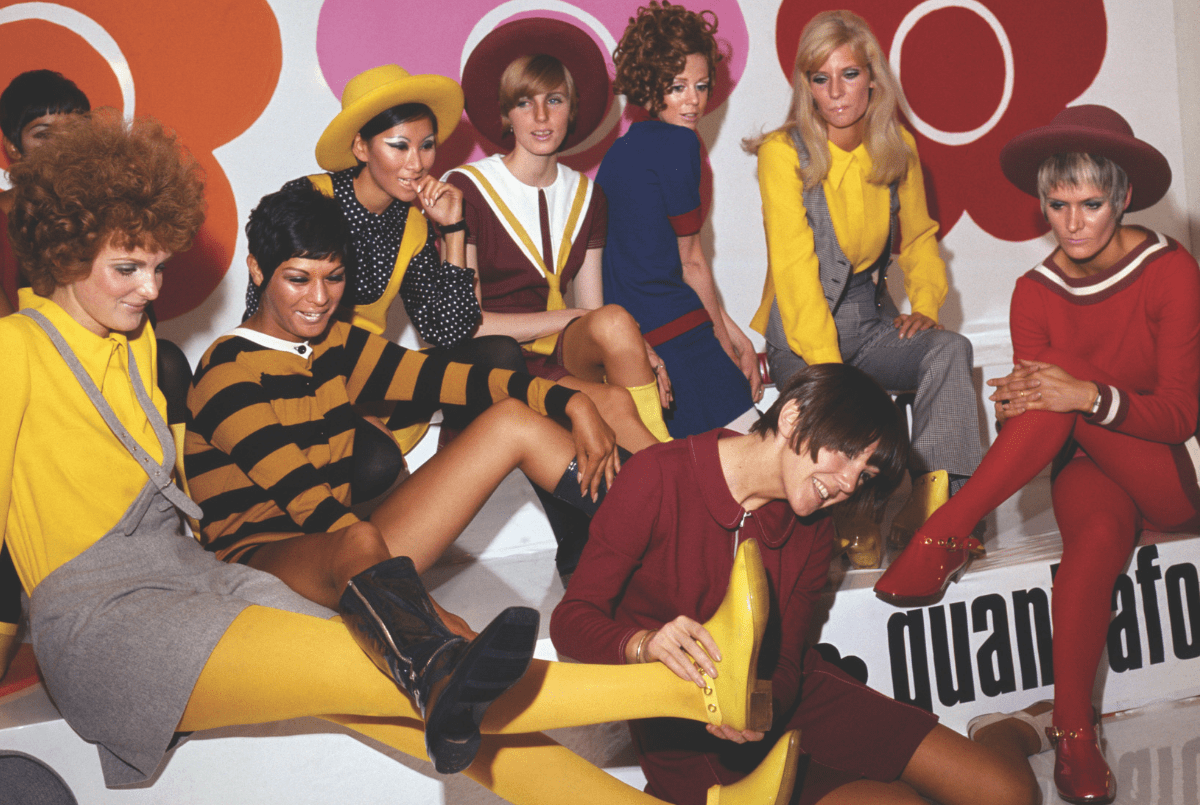 Mary Quant, fashion and the fight for female empowerment

Paving the way for a gender revolution

In the heart of the Swinging 60s, Mary Quant launched a fashion revolution. As an exhibition at the V&A celebrates the groundbreaking designer, The Glossary talks to co-curator Jenny Lister about the Mod aesthetic – and what it meant for female empowerment.

Conjure in your mind an image of London in the Swinging 60s and it almost certainly involves young women striding into a modern new world in neat little tunics with Peter Pan collars or skinny rib knits and daring minis paired with colourful tights and patent leather boots. The creator of those era-defining clothes, Mary Quant, was at the epicentre of the King’s Road Chelsea set; she launched her brand in 1955, and within a decade she was also a household name and a global flag-waver for Britain’s thrilling new fashion scene.

And now, more than 60 years later, the 85-year-old designer’s impact has been re-evaluated with a retrospective at the Victoria & Albert Museum – the first in half a century. Quant, who was made a dame in 2014, not only dressed a generation; as a businesswoman, she demonstrated what was possible at a time when a new sense of freedom was transforming society. “A lot of people found her very inspiring and she was very much part of showing women how to go for it,” says Jenny Lister, who has co-curated the show with Stephanie Wood. “She famously said ‘I didn’t have time to wait for women’s liberation, I just got on with it’ and that is exactly what she did. That female empowerment message seems really timely right now.”

It certainly does – but it’s also crucial to consider the context; in the 50s Britain was still in the grip of post-war austerity (rationing ended in 1954). “At the time young women went straight from dressing as a child to emulating their mothers in tweed suits and formal hats and gloves and matching bags. It was stifling,” explains Lister. But there was a new mood bubbling up as class divisions started to shift, and as young people began to assert their own tastes in music, lifestyle and fashion. Quant was convinced that fashion needed to be both affordable and accessible to this new youth movement. “The whole point of fashion is to make fashionable clothes available to everyone,” she has said. “Mary Quant spoke clearly of her ideas about fashion,” says Lister. “She opens up this whole new world of individualism and easy clothes that broke the rules.”

Quant was born and brought up in Blackheath, London, the daughter of two Welsh school teachers. She studied illustration at Goldsmith’s (her parents wouldn’t let her study fashion) and she then took up an apprenticeship in couture millinery. At college she had met her aristocratic husband-to-be, Alexander Plunket Greene, and when the young couple befriended lawyer-turned-photographer-turned-entrepreneur Archie McNair, at his King’s Road coffee shop, the trio hatched a plan to open a boutique with a basement restaurant, with McNair putting up half of the initial £8000 investment.

Bazaar, which opened in 1955, initially stocked clothes that Quant bought in but she began to design pieces herself, investing each day’s takings in making more clothes (one of the earliest pieces in the exhibition is a simple, printed cotton top thought to have been made for the store in 1956). Her designs were playful but practical and inspired by Mods and the Chelsea set, and by the clothes she’d admired as a child at dance classes – there were pinafore dresses, long men’s cardigans that could be worn as dresses, men’s suiting and, of course, the miniskirts.

It is the thigh-grazing skirt for which the iconic designer is best remembered. “It was the girls on the King’s Road who invented the mini,” Quant once recalled. “I was making easy, youthful, simple clothes, in which you could move, in which you could run and jump and we would make them the length the customer wanted. I wore them very short and the customers would say, ‘Shorter, shorter.’” These higher-than-high hemlines were the most literal manifestation of women’s emerging freedom at the time, a symbol of sexual liberation following the fight for female birth control – and they were quickly adopted by the second-wave feminists, like Germaine Greer and Gloria Steinem.

As well as immortalising the mini, so named after her favourite car, Quant can be credited with inventing hot pants, waterproof mascara and the “Booby Trap” seamless brassiere – the first real foray into “fashion” lingerie. All this, from a girl who was self-taught. And yet, Quant’s lack of fashion training turned out to be a blessing as her approach was anything but conventional – her famous white plastic collars were discovered in a hospitality supplier, the colourful tights she popularised were sourced from theatrical manufacturers as, up to this point, women had worn stockings with garter belts.She also had a striking personal image which was a marketer’s dream – especially when it was set off with the sharp geometric cut created for her by Vidal Sassoon. Quant became the perfect embodiment of her look. It was an image that was soon known across the country (the trio formed the Ginger Group which would mass produce clothes for boutiques and larger stores) and then across the world. In 1960 Quant went on her first trip to America, where some department stores were already stocking her clothes and McNair struck a deal with JC Penney, which had some 1700 retail outlets across the States, and which opened up a huge new market. Quant became a global sensation, and by 1969 it was estimated more than seven million people owned at least one of her designs. And yet, despite her far-reaching appeal, Quant will foreverbe known for defining the “London look”, perhaps enhanced by the style icons of the day – Twiggy, Jean Shrimpton, Pattie Boyd, Ika Hindley et al – who wore her designs.

Lister and her colleagues have spent more than five years pulling the show together but last year’s public “call out” for pieces reaped major rewards. They received over 800 responses, with 35 objects from 30 individuals being selected, alongside personal stories and photographs. As well as original Quant clothes and mass produced pieces there are homemade Quant designs, too, including a Liberty print dress made from a paper pattern in 1964, that the V&A did not have in its own collection. “We had an incredible response and the fact that so many people have hung onto these clothes shows how special they were to the women that wore them,” says the curator. “We’ve got many examples of daughters who won’t let their mothers donate them permanently because they want to have them for themselves or for granddaughters.”

Mary Quant was the heart and soul of her brand – another timely take-away at a moment when authenticity is such a hot topic in fashion as we career at breakneck speed into the digital age. She was the embodiment of the look she created and an icon of her time – all of which she negotiated despite being incredibly shy. It’s a contradiction that Lister finds particularly fascinating; and one that illustrates how strong her belief was in her singular vision. But she was also facilitated by her well-chosen partners, Plunket Green and McNair, who could see the potential from the early days of the Bazaar boutique. “It was quite amateur and accidental to start with but they quickly got their act together,” says Lister.

Quant was in the right place, at the right time, and she had the vision to capitalise on it all. “There was a vacuum that needed to be filled,” adds Lister. “And it was extraordinary what she did. She had the natural ability for fashion, this fantastic catchy name and she was the heart and soul of the brand. She had everything she needed to conquer the world.”

Mary Quant is showing at the Victoria and Albert Museum until 16th February 2020. vam.ac.uk