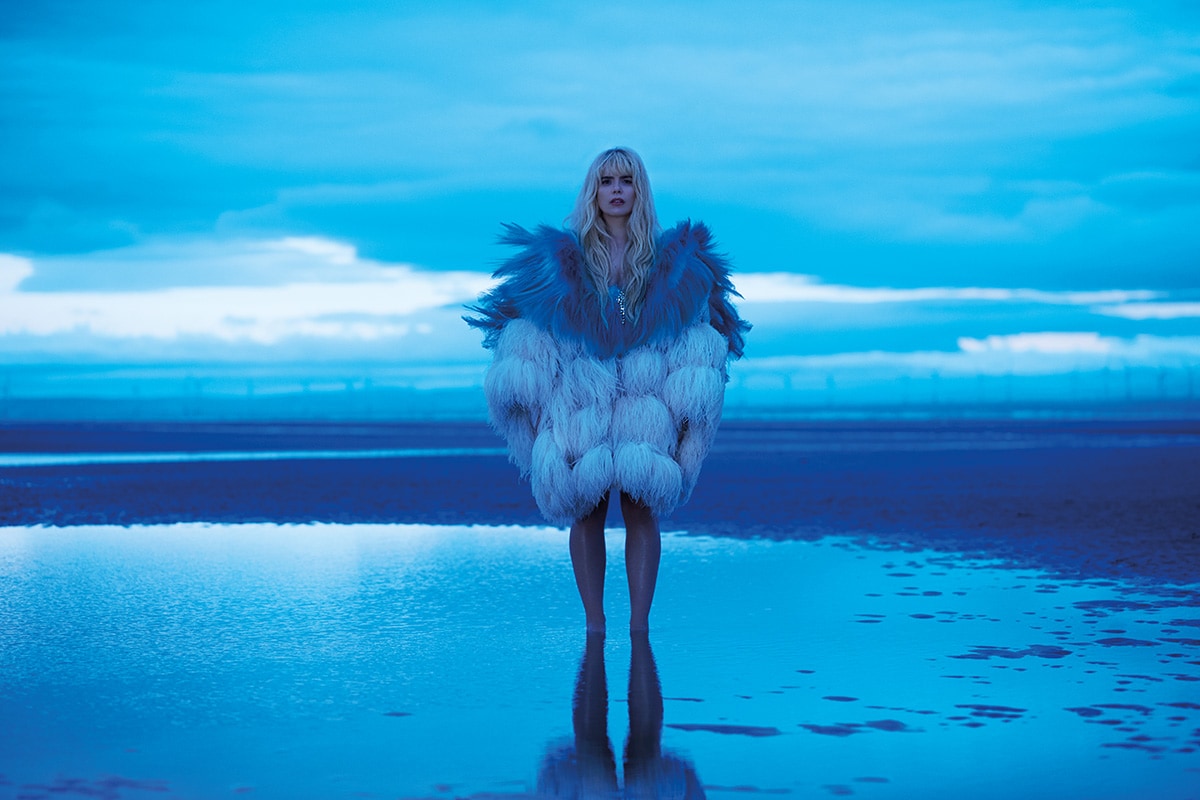 From Brexit to being the breadwinner

The inimitable Paloma Faith reveals how, as her family’s breadwinner, she juggles a platinum career with parenthood; plus her views on the big issues of Brexit and #MeToo harassment, in this 2017 interview.

Somehow, it seems appropriate that Paloma Faith should be dressed in floor-skimming deep-red velvet for breakfast. It’s one of London’s sunniest winter days, not nearly the weekend – just a Wednesday – but Faith, poised in a low-level armchair, looks like she’s about to go to the opera. We’re actually sitting in the library of Notting Hill member’s club The Electric, a windowless room of warm-white lamps, wood panelling and opulent drapes. Faith is here for a morning of interviews, the poached eggs are on their way and very soon the impractically small round table between us will pile up with china dishes and teapots.

The dress, a high-necked, long-sleeved vintage affair trimmed with feathers and paired with mock snakeskin boots, feels typical. Faith is the woman you’d say is never knowingly underdressed, although the musician argues that’s no longer the case. “Having a baby completely interferes with fashion,” she says, rolling her eyes, beaming the trademark wide grin, smoothing down hastily blow dried hair. These days the scramble of getting to work without childcare could not be more real. “One minute I am in my pyjamas doing toast for the baby,” she grins, “the next I’m supposed to be here.”

The past few years or so have been personally defining for Faith. After years of talking about the fact she wanted children, she became a mother in November 2016, at 35. “It changed everything,” she says. “Even the way I sing is different now: it’s probably psychological, but my voice has opened up in a different way. I feel completely strengthened by it.”

Birth itself was “hell”, and after a 20-hour labour that ended in an emergency C-section, Faith publicly thanked the NHS at London’s University College Hospital. It then emerged that she had an infection in her womb. “It was quite a bad time,” she remembers of the months that followed. “I felt really set back by it. I breastfed for five months and that was hard because I was ill. But it was longer before I was back to myself. Things like eating a healthy diet… I couldn’t get my head around that for ages. Or going to the gym…” she pulls a face. “Everything new mums go through: at one point I was just sitting there thinking, ‘How am I going to be a person any more?’”

She chuckles now, a laugh as distinctive as the east London inflection to her voice, and at maximum capacity, a full-on cackle. Later she will tell a humorous anecdote about couriering breast milk from a recording studio to her house. But there’s an undercurrent of anxiety during our interview, and accompanying her return to the spotlight. When we meet, she’s about to release The Architect, her first album in three years. It’s a record she started writing before she fell pregnant and finished soon after the baby arrived, because she wanted to make a comeback straight after her maternity leave.

“I needed to get back to work because I’m the breadwinner in my family,” she says now, explaining that her partner, French artist Leyman Lahcine, is currently interning at a fashion-design company. “But also, I know how easy it is to be forgotten in this industry.” Did she really worry about taking time off, three triple-platinum selling albums in? “Yeah. I remember being with my accountant one day on maternity leave, and I kept making these little asides, ‘If I ever get to work again…’ And eventually he said, ‘Paloma, do you know my wife left her job to have a baby, had all these ideas on maternity leave and went back to the company as a director? People do it.’ And to be honest, that sort of got my head in gear.”

Faith’s music is usually high drama. In the past, she has written candidly about love and heartbreak; the signature of her songs is soulful poignancy. The Architect is a departure from her usual style in that it’s rooted in politics, taking in everything from the refugee crisis to Brexit. Her new single, Guilty, is addressed to those who voted leave and regretted it. “I wanted to write this album because I think we’re in a really transitional moment politically and socially,” she says. “But also, there aren’t many women addressing it in pop music. Lily Allen used to do a little bit of social commentary about the environment she was in and Kate Nash was in a punk band that nobody really knew about, but the examples are actually few and far between.”

When planning the album, she looked back to the 60s and 70s. “My influences are fairly predictable, much the same as lots of my peers: Billie Holiday, Nina Simon, Etta James, Carole King. The reason I love their songs so much is because they’re saying something about their social climate.” But the feel of the new album is contemporary, and her songs could easily be mistaken for odes to exes. Faith says this was intentional: “I made a conscious effort to make it sound commercial, so that people still felt close to it.”

Most of the time she was writing, she was pregnant. “Writing with a baby growing inside you makes it feel personal. It got me thinking about all the qualities I wanted my child to have and that one day they were going to get to listen to it.” It’s why she called the record The Architect, and why the overall theme became social responsibility. “Because otherwise, whose responsibility is all this stuff? It’s the police, it’s the community, it’s parenting. But it’s not just one person’s – it’s collective. It’s all of us.”

She cites the investigation into the Grenfell Tower fire as a recent example. “People say, ‘Oh, it’s not my fault,’ but it never is one person’s fault. That’s why inevitably the court is not going to conclude anything.” And it’s the same with the #MeToo movement that has emerged since the claims of Harvey Weinstein’s sexual assaults: “We do have a responsibility because somehow our culture accepts builders who whistle at women, and someone grabbing someone’s bum when they’re a bit drunk. That’s everyday sexism and that’s where it begins.”

Writing the album made her think about how to parent. Faith says she has declined to reveal the sex or name of her baby because she’d rather their life remain private. Recently, she told a journalist that she had decided to raise her child as “gender neutral” – a term she now regrets because she used it in the wrong context. “What I meant was that I don’t believe in giving my child gender-specific toys. I want to make everything available because I don’t want to enforce any sexist stereotypes.” It’s also the reason she won’t dress her baby in pink or blue. “Besides the fact I don’t even think it looks cute. I actually think it looks a bit grim,” she says. As a kid, she was a tomboy. “I never used to wear dresses. I hated dolls. But my style is quite feminine now.” She grew up on a council estate in Hackney, to a single parent mother, and has always been a bargain hunter. “I shop a lot but it’s mainly vintage” she explains.

In fact, when she’s bought expensive things, it’s usually been under the influence of other people. Her personal assistant sent her to Selfridges after she won a BRIT (for Best Female Solo Artist in 2015), and she nearly bought a pair of Manolo heels. “But most of the time I borrow things, and to be honest, I spend my money  on experiences.” If she could escape London tomorrow, she’d go back to the Maldives. “It was the height of luxury. Everything you looked at was like a screensaver.” She smiles. “But that’s unlikely right at the moment.”

Things are different now, with a baby. These days she rarely goes out on the town, preferring to stay in and catch up on sleep. Never in her life has she watched so much television. “I’m obsessed with Louis Theroux’s series. I’m good friends with Kayvan Novak, who’s the Fonejacker, and he leaves me voice notes pretending to be Louis walking around my house. He’ll go, ‘‘Paloma’s being a bit volatile today…’” she giggles.

Soon the tide will turn again. In March, Faith will embark on a nationwide arena tour, starting in Leeds and moving around the country for a month. Shortly after we meet, The Architect sails to number one in the charts. Her publicist sends me a note about how she’ll celebrate; it’s the first time one of her albums has ever hit the top spot. She hadn’t planned to go out, but by pure coincidence they’ve got a babysitter for the night.

“The whole time I was thinking about releasing another new album, I was thinking how do I do both? How do I have a baby and sing?” I remember her saying to me. As it turns out, and if the force of her determination was anything to go by, she needn’t have been so worried.

A version of this article was published in 2017.