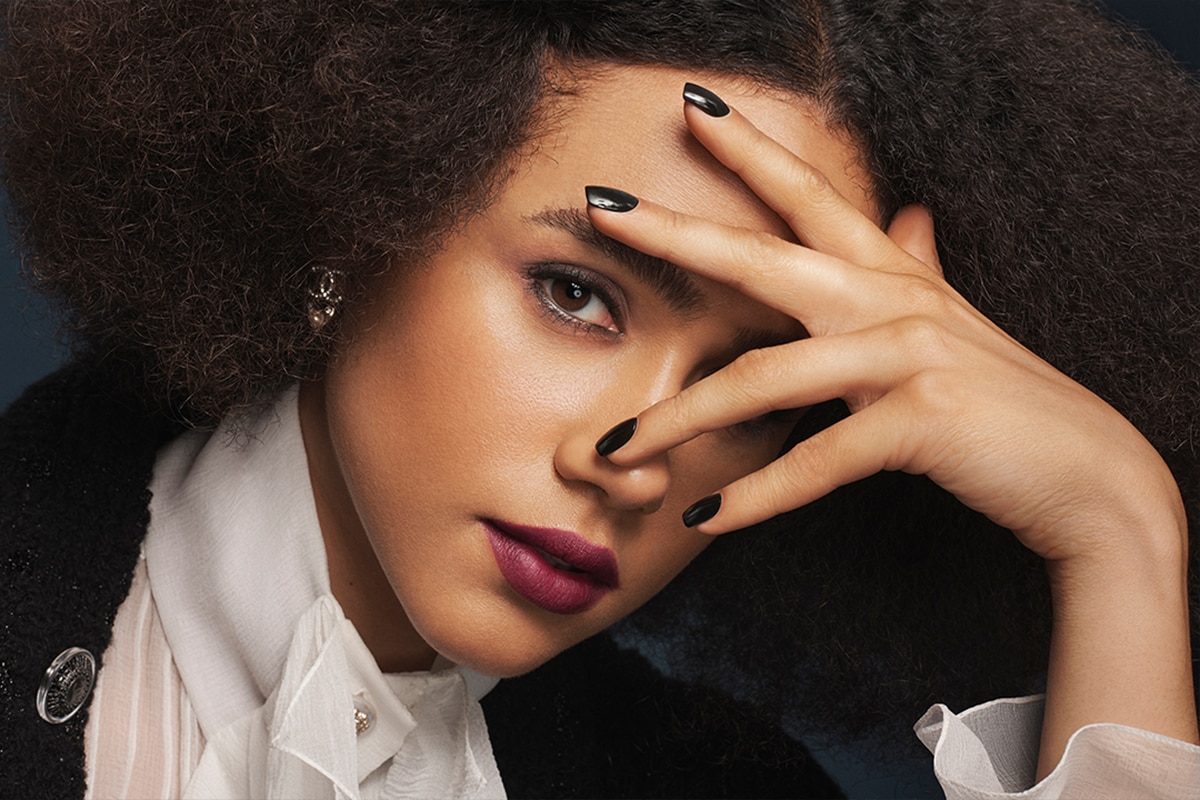 The Game of Thrones star talks feminism, diversity and make-up

Game of Thrones has led to global stardom for Nathalie Emmanuel. Here, she models the new season beauty looks from Chanel’s Autumn-Winter 2019 make-up collection while talking about diversity in film, telling female stories and finding her style.

It comes as no surprise that Nathalie Emmanuel likes a statement lipstick. After spending any amount of time talking to her, it’s clear that lipstick doesn’t merely represent a welcome pop of colour (though, of course, it is that too). It’s also unapologetic, impactful. “I think it’s always kind of frowned upon when you say that you like things about yourself,” she says. But she likes her lips. “So I wear bright colours and show them off a bit. It makes me feel strong and empowered; it’s a way to express yourself, your mood that day.”

It’s always fun, she says, “to play around with different looks”. As a successful actor, she’s no stranger to playing diverse roles. Best known as Missandei in Game of Thrones, her character’s tragic end sparked one of the hottest talking points of the year. Now Emmanuel is busier than ever – when we speak she is about to fly to the US to film her recurring role as a hacker in the latest Fast and Furious franchise; she also recently played the lead in Mindy Kaling’s TV adaptation of Four Weddings and a Funeral as Maya, an American political speechwriter.

At 30, her career is going stellar and people are taking notice. And yet, Emmanuel remains resolutely grounded. She describes her everyday style as “pretty simple, just T-shirts and jeans.” Although for events she now has a stylist, Cher Coulter. “She’s really great as she gets what I like and what I don’t like, but she also challenges me to be a bit daring. There were definitely things that I thought I could never wear and that didn’t fit my body, and actually she has just taught me the benefits of a good tailor.” A lesson that has clearly paid off with the column inches devoted to Emmanuel’s red-carpet looks in recent months.

Emmanuel has an equally down-to-earth attitude when it comes to body image; vegan for seven years, she can’t remember the last time she stood on a pair of scales. “I’m just done torturing myself about that stuff.” She has a personal trainer four times a week and “a lot of our training is goal-based as opposed to weight-based.” Exercise, she says, is as much about taking care of her mental health as physical. Last year, she trained as a yoga teacher during a Game of Thrones filming break. Her love of yoga began more than ten years ago when she was “going through a stressful time with work and personally. I needed to go and find something to do by myself”. These days, she practices it when she can. “Things can be crazy sometimes, so it allows me time to check in with myself for an hour. I like to use it to find out how I feel, find some stillness and peace. You are just noting what is going on with you and switching your brain off for a while. When I’m away from family, friends or home it can be a source of solace and it can make me do my job better.”

It’s hard to believe that there was a time when this thoughtful, poised woman was considering giving up acting. Her career, which had begun so well – she was cast in the West End production of The Lion King when she was ten, and had worked on the teen soap Hollyoaks for several years – was stalling and she was working in a clothes shop. After spotting a casting call for a young, non-white actor to join the TV show Game of Thrones, she decided to give it another shot, auditioning and getting the role of Missandei, the clever and willowy translator and right-hand woman of the all-powerful Daenerys Targaryen. She joined the show – already successful, though not yet the huge phenomenon it became – in its third series. “It changed my life,” she says. “Before I’d even shot the part, I was getting auditions again, because of the credibility the show had. All of a sudden, casting directors who didn’t want to see the ex-soap star were like ‘we’ve got this part you might be good for’, because it validated me. It shows the fickle, superficial nature of this industry. I’m so grateful because it put me on a different level and my life has not been the same since.”

Emmanuel grew up in Southend-on-Sea with an older sister, and it was her mother who encouraged her to go to singing and dancing classes to boost her confidence. “I had a shyness about me – and I still do but I think I’ve got better at dealing with it. My mum would have drama with me every time she dropped me off at nursery or school. I just wanted to be with her all the time, and it was chaos.” Emmanuel credits her mum with keeping her grounded. She is a carer for adults with learning disabilities and Emmanuel has been around the people she works with all her life. As a child, she would be taken to work with her mum, who couldn’t afford childcare, during school holidays; when she was a teenager, her mum’s clients would come to stay with the family. “The amazing environment she created gave us a perspective,” says Emmanuel. “You have to meet people where they’re at, not be judgmental; be compassionate. We’ve always had a very grounded upbringing because of her, and the work she does.” As for her friends back home, “they just see the frizzy-haired, glasses-wearing Nat. I’m the person they’ve known, as opposed to this actress or sort of celebrity, whatever that means. I don’t see myself that way but the world might”.

Despite her rising fame, she still manages to get around London, where she lives, largely unnoticed. “My day-to-day life is pretty much the same,” she says, although she admits she does get stopped more. “Usually people are pretty cool and polite but there are times when I do wish I was invisible as it slows you down.” She loves the capital city, she says, for its diversity. “You can get all kinds of food, you can listen to all kinds of music. Being a mixed woman of colour, I embody, physically, the city’s blend of culture and people, and I love London for that. It’s meant I’ve made friends from all kinds of backgrounds and cultures.”

Has she noticed her industry becoming more diverse? “We are seeing much more inclusive casting and I’m seeing a lot more women and people of colour behind the camera in terms of writers and producers, but I still think that we have a really long way to go in that respect.” She loves the director Ava DuVernay, who made Selma, “and obviously Mindy Kaling, who is just killing it, writing and producing and just being an all-round badass lady boss”. It’s an exciting time, she says. “There is loads of wonderful work coming up, with people getting an opportunity when maybe five years ago they weren’t even getting a look-in. It’s something that I actively want to be involved in, whether it’s producing or writing – getting behind projects and trying to use the platform and privilege that I’ve acquired over the years, to help someone else tell a story. For me, it’s about trying to bring as many people to the table as possible.”

She grew up not seeing girls who looked like her represented. “Seeing me exist in the media tells some child somewhere that there is space for them in the world. It’s quite emotional to think about and talk about.” When Emmanuel went to see DuVernay’s film Wrinkle in Time, in which the lead character is played by Storm Reid, who is black, “I cried in the cinema because she was smart, had curly hair and goes through this journey of learning to love herself. It spoke so much to me and I wondered where this movie was when I was ten? It was so beautiful,” she says.

Emmanuel believes the #MeToo movement has also had a noticeable impact on the industry. “It’s definitely changed the way people interact in a professional setting, which is very welcome.” She says she hasn’t experienced any serious abuse or assault that other actresses have reported but “I have been made to feel uncomfortable on many occasions by people who have been too familiar or affectionate, and they’re definitely abusing their position.” Before the #MeToo movement, she says she was aware that women are “put in a position where we have to appease the person who is being inappropriate – to do it in a way that keeps their ego intact, and [keeps] you safe, and your peace of mind intact”.

She says she has “always been quite vocal and able to let my position be known” but has become more empowered to “shut certain conversations or behaviours down more quickly. I’m very grateful for that. I think #MeToo has given women working in the industry a voice. It can still be scary to come forward and speak up but I think that now, because we have actively said that we are not allowing it anymore, women have more confidence.” Still, she says, there’s more work to be done. “To sort this we have to address the culture of objectifying women, sexualising women and young girls”. And when someone such as Donald Trump can be elected, after talking about “grabbing women”, “it just makes me feel like those issues are not important”.

Is there anything career-wise she would have done differently? “Not really,” she says. “I don’t regret anything because I see everything as a lesson. There are times when I wish I had spoken up, and defended myself more, and defended others more. I think a lot of the time we get scared, especially as women, to speak up because you don’t want to be ‘difficult’. Now, I’m much more capable of [speaking up], even if my heart is in my throat the whole time. I’ve realised it’s important that I do. We need to dismantle this idea that by speaking up we’re a problem – if we were men no one would say we were problematic.”

If Emmanuel has a plan for the future, it is to continue to work hard in as many roles that stretch and challenge her as possible, though she’s also talking about creating her own work, and perhaps one day going back to university. “I definitely have a passion for trying something new,” she says. “I’m looking for that next thing and what fits.”