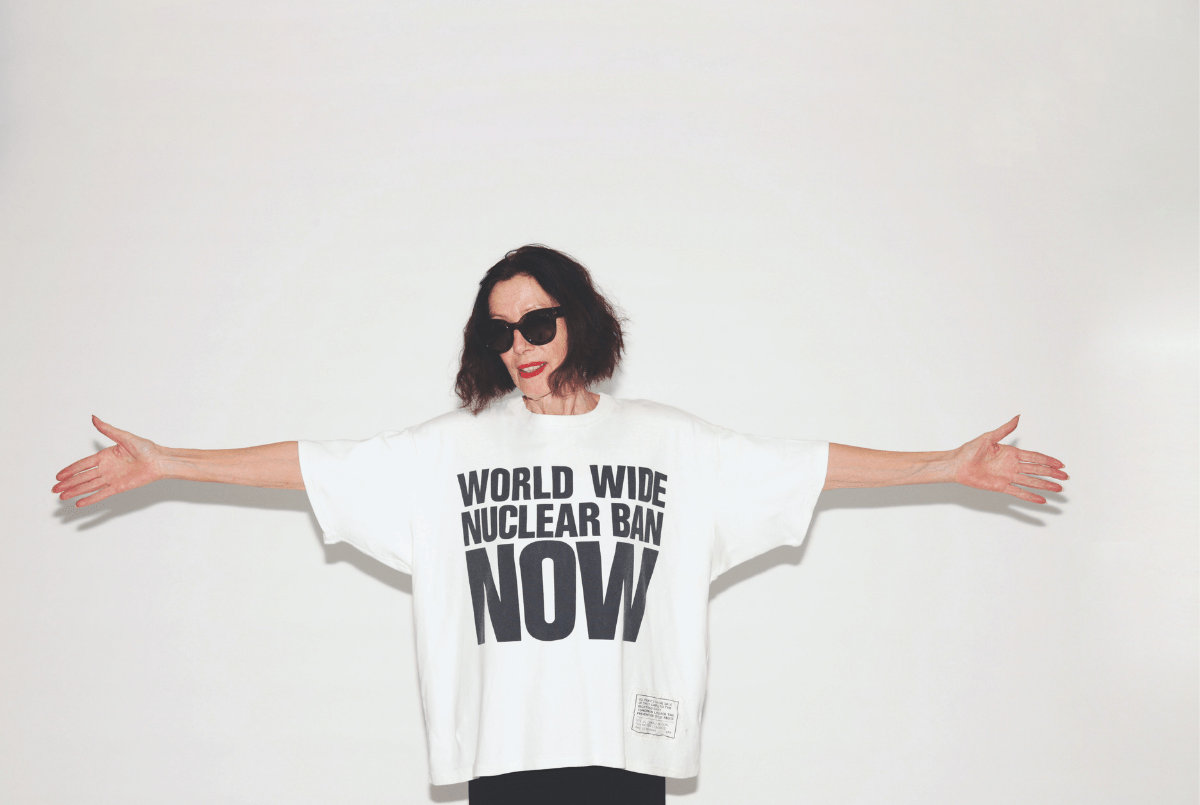 Still a radical force for change

Katharine Hamnett was campaigning for the environment long before it became mainstream. In an exclusive interview, the radical designer tells The Glossary why, 30 years on, she’ll never give up the fight.

Back in the late 80s, concern for the environment was very much a fringe issue. Things couldn’t be that bad, could they? Renowned socially-conscious fashion designer Katharine Hamnett didn’t think so when, several years after she set up her label, she decided to conduct an audit of its environmental impact. “Just to make sure,” she says, that her company was in line with the Buddhist principles she had become interested in of caring for people and the planet. “I didn’t think we would find anything, but [the report] came back and it was a complete nightmare,” she says. “We were up to our neck in one of the most hellish industries on earth.” And so fashion’s most radical designer set about trying to change the industry. That she’s still fighting 30 years later – to reduce fashion’s vast negative environmental impact, which makes it one of the most polluting industries on earth, and to improve the lives of its workers – is deeply disappointing to her. But then this is a woman, you sense, who doesn’t do despair. Forthright, funny and forging her own path, Hamnett remains focused on the goal.

Back then, she started trying to make her business as sustainable as possible, such as using organic cotton and doing what she could to reduce carbon emissions. “The industry was not keen, at all,” she says. “I thought I would tell everybody and everybody would change, but there was absolutely no…” She pauses, remembering. “People who had been friendly were suddenly unfriendly. People I’d bought hundreds of thousands of metres of conventional cotton from were saying ‘why should we do organic cotton when you’re the only one asking for it?’” Even within her own company, not all of her design employees were on board. “Designers just want to be free and I would say ‘you can’t use this’.” It was, she says, “devastating” that the fashion industry could “really think so little, think that it was so unimportant, but now we know human behaviour is threatening life on earth.”

Hamnett had launched her label in 1979 and was soon making her name as an outspoken activist, alongside the oversized silhouettes and utilitarian style that won her the British Fashion Council’s first designer of the year award, and later saw her appointed a CBE. In the memorable photograph of her at a Downing Street party with Margaret Thatcher in 1984, she is wearing a T-shirt with the slogan “58% don’t want Pershing” – a reference to the US nuclear missiles being stationed in Europe. “That was a practical joke on Thatcher. I had no idea it was going to resonate so far for so long. I knocked it up that afternoon.” Her first bold slogan T-shirt read “Choose Life”, inspired by Buddhism and famously worn by George Michael, but Hamnett’s messages had become increasingly political. When she made one reading “US Go Home”, again referring to US missiles, one store sent them back for fear of offending their American customers. Hamnett didn’t care.

There had been political T-shirts before, of course, but Hamnett saw an opportunity to “slick up protest – do it in a proper typeface. Before that it was rainbows in crayon. You’re [up against] some of the most sophisticated people on earth, a whole communications industry. The contribution of protest was pretty pathetic. People’s heart was in the right place but they didn’t have the communication skills you needed to effect change.” She understood the power of attention. As a successful brand, “we were given enormous amounts of media coverage, and we were also very copied, so I thought this was an opportunity to put out T-shirts with giant printing that could be read from 100 yards, putting environmental or political messages out.”

Born in Kent, Hamnett grew up moving around Europe, following her diplomat father. Her parents had fostered a love of nature in her, but her upbringing was also “a political, military, diplomatic environment.” Being at St Martin’s School of Art, as it was then, in 1968 – that fevered year of worldwide protests – forged her politics. “I had come from a fairly right-wing background but then I became politicised, and became left-wing while I was at college and became aware of all the iniquities that were going on.”

Ahead of her time, Hamnett’s vision of environmental catastrophe has been vindicated, and sustainability is the hottest topic for many fashion companies. “It’s hugely encouraging now that people are talking about it,” she says, but points out that there hasn’t been nearly enough action. The same things within the fashion industry that were bad for the environment 30 years ago are still bad, she says – intensive conventional cotton farming, the tanning process, polluting dyes, the use of plastics. “I’ve seen the growth of consumer concerns but I’ve also seen the rise of companies ‘greenwashing’ and ‘let’s pretend we’re doing something’.” For a while, Hamnett spoke at a few conferences on environmental issues but swore off them, put off by the career speakers on the conference – and hospitality – circuit. “I was ashamed of my carbon emissions getting there.” Then she adds, typically forthright, “I realised that nobody gave a fuck.”

The prospect of Brexit appalls her – in time-tested fashion, she has produced T-shirts with slogans “Cancel Brexit” and “Second Referendum Now”, though she’s not wholly optimistic about their impact. “It’s fine wearing a T-shirt and going on a march, but you haven’t really achieved anything. It’s a bit of an echo chamber,” she says. “The only thing that changes politicians’ behaviour is something that threatens their ability to get re-elected – engage politically, write to your elected representative, demand they represent your views.” Brexit, she predicts, will be terrible for the fashion business. “Half the people who work for us are EU citizens. The best part of our market is in Europe. Everything that Brexit stands for puts obstacles in the way of that.” She has already moved her label’s manufacturing to Italy in order to continue trading at lower tariffs with other markets. “We also wanted to support Italian traditional skills, but it made us Brexit-proof.”

In the early 2000s, Hamnett took a break from the fashion industry, feeling disillusioned. “It was difficult to get cooperation,” she says. “I didn’t want to make a living at the expense of environmental degradation and human suffering. It’s a moral dilemma. Anyone can get successful being a bastard. I think the challenge is trying to be successful on your own terms and being a decent human being.”

But with Brexit, the time seemed right to return to her simple aesthetic and social values and she re-launched her own label for Autumn/Winter 2017. The rapper Kanye West had a hand in her return – he had spotted her original designs in an Italian vintage store and, seeking inspiration for his own fashion label Yeezy, got in contact with her to ask if he could go through Hamnett’s archive. “They were speaking to the language I wanted to say,” he told the Business of Fashion in 2015. “Every single piece I saw, I connected with emotionally. She created something that I thought was relevant to where we are today.”

West made Hamnett realise how timeless many of her styles were. “Throughout my career I have always tried to produce archetypes, clothes that have a reason for being, that have a kind of soul, that are fashionable now but never go out of fashion, that you keep in your wardrobe forever,” Hamnett said at the time of her return. “These were the styles he picked and these are the styles that people are driving me mad about to reissue, so here they are.” And so, two years ago, she found herself back on the fashion scene. “And it’s great,” she says. “We’re selling all over the world, in beautiful shops. And every season sustainability is getting easier – you can find the materials, people cooperate because people actually care and support you because they believe in it.”

Is she aware of the influence she’s had in the fashion industry throughout her long career? She laughs off the suggestion. “I don’t know if I’ve got one.” But those slogan T-shirts alone have attained iconic status. Think of the imitators, including designer Henry Holland’s cheeky 2006 versions. “Those were stupid, so irritating,” says Hamnett. She didn’t mind people copying her bold style, she says, “but I was hoping [people] would copy the messages which were biting, trenchant. It was the content that was the important bit. I can’t remember what [Holland’s] said but it was just bullshit.”

Now in her early seventies, Hamnett says she isn’t interested in looking back and there are no retirement plans. “I’m more interested in the stuff I’m going to do next,” she says. “It may not go down as well as the old stuff but it’s what I’m interested in.” She wants to get involved in recycling ocean plastics, using new sustainable fabrics, and continuing to promote organic cotton and championing legislation that would improve the lives of clothing factory workers. “People say these ideas usually take about 30 years but 30 years is too long.”

While she’s alarmed by the rise of far right politicians, and the ongoing environmental crisis, she is also cautiously optimistic. “There is a mood for change and I think we’re going to see huge political change within the next five years. Hopefully a lot of it is going to be positive.” And beneath all her campaigning is a perennial love of fashion. Clothes, she says, “have a sort of magic. They are transformative. There is something still mysterious and exciting – even if they have been commodified to death.”

Favourite cafe: Maison Berated
I love Maison Bertaux in Greek Street. I used to go there when I was at college in the Sixties. I’d have a coffee and a brioche. It hasn’t changed – there’s still the same paint on the walls, the same furniture. It’s incredible. maisonbertaux.com

Go-to gallery: Tate Britain
I love Tate Britain for its permanent collection, and the building. And the Victoria & Albert museum – I spent half my time at college in the library there. tate.org.uk, vam.ac.uk

Place to unwind: Hampstead Heath
Hampstead Heath. And the back of Westminster Abbey – there is some extraordinary ancient stone there which I like to go and look at. hampsteadheath.net, westminster-abbey.org

Hidden gem: parakeets in Hyde Park
There’s a parakeet tree in Hyde Park, near the Serpentine and the Henry Moore statue. The parakeets come down and eat out of your hand. royalparks.org.uk

A version of this interview was originally published in the Spring 2019 issue of The Glossary.