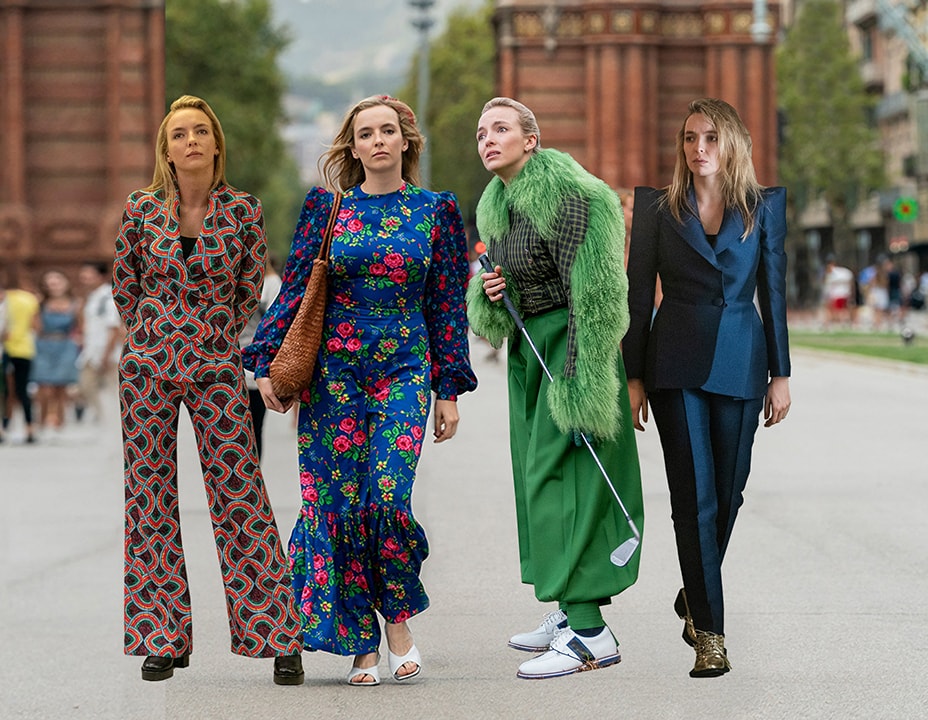 From Simone Rocha shoes, Olivia Von Halle pyjamas, a coat by emerging label Charlotte Knowles to that dress by The Vampire’s Wife, these are the stylish assassin’s new looks

Today marks the long awaited return of Killing Eve season 3, brought forward by two weeks as a result of the Coronavirus crisis, and while the nation is on tenterhooks to find out what happens next between psychopathic assassin Villanelle (played by the brilliant Jodie Comer) and MI5 investigator Eve (played by Golden Globe winner Sandra Oh), there’s one other topic even more pressing: what – and who – will TV’s most fashion-forward killer be wearing?

Since Killing Eve first exploded onto our screens in September 2018, Villanelle has firmly established herself as one of television’s most fashionable anti-heroines, carrying out her kills in a dizzying array of high-end outfits, from brocade Dries Van Noten suits to sharp tailored Alexander McQueen jackets. And no one can forget the first series’ scene-stealing look: a gloriously frothy, bubblegum pink dress by young London-based designer Molly Goddard. At the time, Goddard was relatively unknown outside of the fashion industry, having only founded her brand in 2014, but the show swiftly catapulted her to global fame, with her work recognised around the world almost overnight.

For season 3 you can expect just as many out-there looks, carefully curated by new costume designer Sam Perry, who follows in the footsteps of Phoebe de Gaye in the first series and Charlotte Mitchell in the second (a new costume designer is chosen every season, to keep the fashion fresh). For her take on the killer’s style, Perry has mixed designer pieces with vintage finds (some of which were found in a second-hand store on the Holloway Road) for a retro, bohemian aesthetic that harks back to the past, drawing heavily on a ’70s mood board.

“There wasn’t an intention to give season 3 a ’70s feel in particular, but I think maybe a vintage-inspired vibe crept in there,” said Perry in an interview with US Vogue.  “Some of the outfits have a ’60s, ’70s and ’80s edge to them. The Halpern psychedelic suit definitely had a nod to swinging London.”

Later in the series, Villanelle travels to Barcelona, wearing a printed, ’70s-inspired dress from La DoubleJ, styled with distressed Golden Goose cowboy boots. “I was really drawn towards the vintage prints from La DoubleJ for Villanelle’s new wardrobe for Barcelona,” said Perry. “The yellow print felt so youthful and joyous and really complemented her gorgeous new apartment.”

This season’s standout look comes in the form of an electric blue, puffed-shoulder, floral maxi dress by cult label The Vampire’s Wife. The London-based brand founded by Susie Cave (model and wife of singer Nick Cave) is known for its ultra feminine and flattering silhouettes infused with a vintage, gothic edge, and is beloved by an A-list following that includes Alexa Chung, Sienna Miller, Keira Knightley and the Duchess of Cambridge.

Other British labels to look out for include a pair of metallic shoes and an embellished sheer organza dress by Simone Rocha, a chic set of yellow printed silk pyjamas by loungewear queen Olivia Von Halle and a show stopping green check bomber jacket with a fluffy shearling-trim by emerging British designer Charlotte Knowles. The jacket – made from recycled ocean plastic – was a key look from Charlotte’s AW19 show and was purchased last season by Perry from Dover Street Market.

If there’s one person who knows about the phenomenal power this show has to boost a career it’s Daisy Hoppen, the fashion publicist who looks after Molly Goddard, Olivia Von Halle and The Vampire’s Wife, as well as Dover Street Market. “The power of Killing Eve as a programme for brands is really exceptional,” says Hoppen. “That first season was incredible for Molly, and for people who might not know her to learn more about her aesthetic. The fact that the series is showcased to a global audience and that Villanelle wears those clothes in the most unusual of circumstances – whether that’s visiting her therapist or performing her next kill – that’s what really resonates with the audience and captures their attention.”

Television’s most fashion-obsessed killer strikes again – and we couldn’t be happier.

Killing Eve airs from Monday 13 April on BBC One.
bbc.co.uk