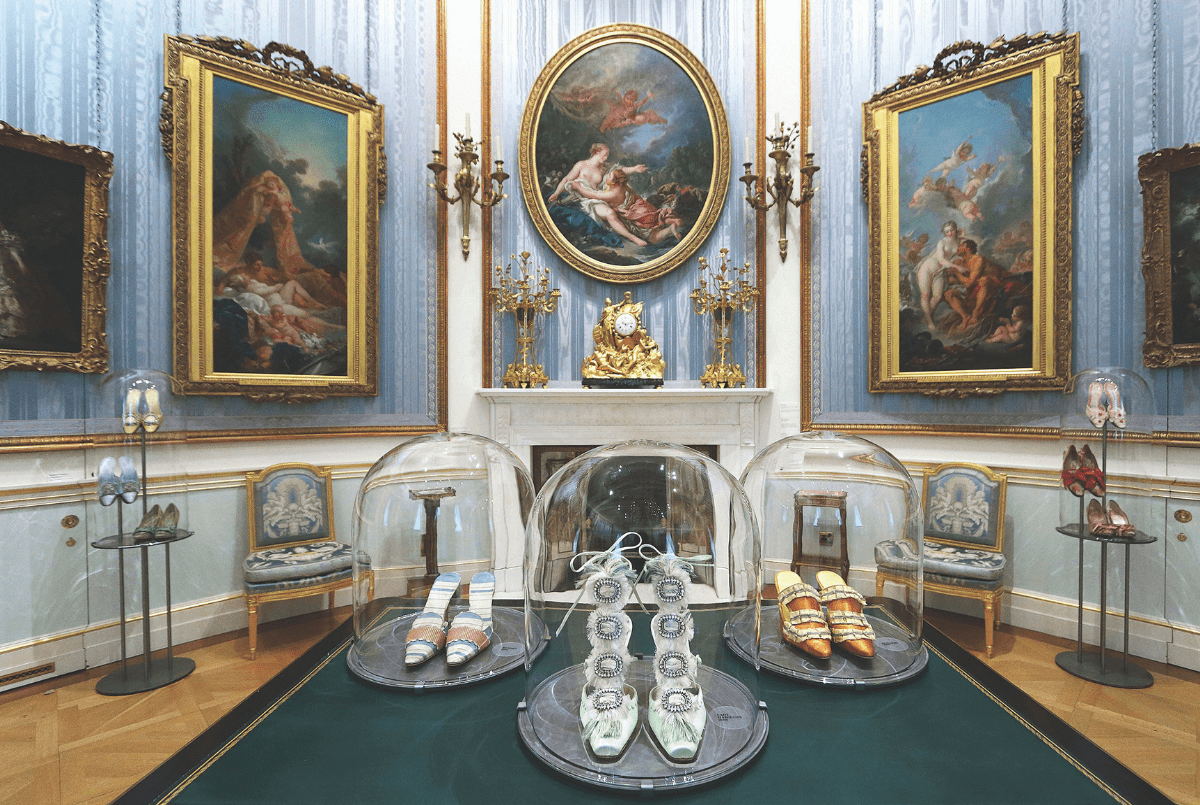 The celebration of art and fashion will now run until October

His exquisite shoes are works of art, revered the world over. Now, his London exhibition proves to be an equal success as the showcase is extended by two months after a 30 per cent rise in visitors to the Wallace Collection. Here, the legendary designer shares how it feels to see his designs amidst the museum’s masterpieces.

There are few designers who truly deserve legendary status – but Manolo Blahnik is certainly one of them. The Spanish-born and London-based designer’s fantastical shoes have inspired on-screen plotlines (they were Carrie Bradshaw’s one true and constant love in Sex and the City) and song lyrics – Beyoncé and Lady Gaga are among the many songwriters who have eulogised his footwear. Manolos are beloved by A-listers too numerous to mention and adored by fashion doyennes. As Anna Wintour, Blahnik’s long-standing friend and client, opined in the 2017 biopic Manolo: The Boy Who Made Shoes for Lizards: “I can’t remember the last time I wore anybody else’s shoes – I just don’t even look at them.” And they’ve long been the royal go-to; Princess Diana was a regular client who usually favoured the designer’s low heels, while the Duchess of Sussex is a devotee of the towering, low-cut ‘BB’ pump. “It is a great honour and joy to have my shoes worn by such a beautiful young lady,” Blahnik once said. “Meghan is well on her way to becoming a style icon of the 21st century.” His designs have, of course, also graced catwalks in fashion capitals for decades – next year the shoemaker celebrates his 50th anniversary – and 76-year-old Blahnik, who was awarded an Honorary CBE in 2007, has 18 stores worldwide, producing more than 600 shoes a season.

This summer, these elegant, timeless and beautifully-crafted shoes are being lauded as the masterpieces that they truly are, displayed among the frothy Fragonards and luscious Bouchers of one of London’s hidden gems, the Wallace Collection. Blahnik, whose tireless creativity is fuelled by a deep passion for, and knowledge of, the decorative arts, has been going to the museum regularly ever since his first visit aged 19 – although typically, never with any fuss or fanfare. “It’s been a great source of inspiration for me over the years with its incredible number of exquisite and breathtaking works from Fragonard, Rembrandt and Watteau,” says Blahnik of the collection that was amassed through the 18th and 19th centuries by Sir Richard Wallace, then bequeathed to the nation by Lady Wallace in 1897. “It is more than an honour that our shoes are exhibited alongside these 17th and 18th century masterpieces. We almost feel that we are not really worthy to be here, albeit temporarily!”

While the ever-modest designer refuses to rest on his laurels, the museum’s director Xavier Bray believes Blahnik’s creations are absolutely worthy of a spot among the museum’s treasures: “I know he’s a bit nervous to see his shoes juxtaposed with works of art in a museum, but for us there’s a friction in creating this show where you have this fantastic balance between the shoe and the art that surrounds it. These are shoes that are designed to be worn, they are utilitarian, but at the same time they really are works of art.”

The idea for the show emerged organically after the pair were introduced, and together they conceived ten distinct areas that link Blahnik’s passions, inspirations and design with themes from the museum’s history and collections. In the delicious pink-walled Small Drawing Room, parallels are drawn between the Commedia dell’Arte – an early form of professional theatre originating from Italy – which will be seen alongside Blahnik’s exuberant designs featuring harlequin checks, pom-poms and vivid silks. In the Oval Drawing Room, two of the gallery’s best known works, Fragonard’s The Swing (1767) and Boucher’s Madame de Pompadour (1759), are joined by 13 pairs of the delicious candy-coloured shoes created by Blahnik for Sofia Coppola’s Marie-Antoinette. Works by British artists including Reynolds, Gainsborough and Landseer are contrasted in the West Room with shoes that embody Blahnik’s love of traditional materials – including tartans and tweeds – and outdoor pursuits. In the Boudoir, an ornate and beautifully lit cabinet filled with diamond-encrusted gold boxes and delicate miniatures sits alongside some of the most intricately worked bejewelled creations. Shoes are placed in bell jars, sometimes in twos or fours, or arranged within cabinets alongside the museum’s ornate treasures, including Blahnik’s favourite Boulle wardrobes, which were once used by Queen Victoria.

For fans of the designer, it will be an unmissable opportunity to see his most incredible designs up close. Each one conceived first with a beautiful hand-painted drawing, then made by hand in Italy, where Blahnik still goes each season to personally work on the production. And it’s this sense of craft and creation, an absolute passion for the process, that has perhaps always singled out the designer from so many of his contemporaries. Blahnik grew up in Santa Cruz in the Canary Islands and at 14 went to school in Geneva, where he stayed for university – his parents wanted him to study politics and law, but he switched to architecture and literature. He moved to Paris in the mid-60s, where he studied art and stage set design; in 1969 he moved to London and quickly became immersed in the glamorous world of the Chelsea set while working for Joan Burstein at Feathers. But it was Diana Vreeland, the American Vogue editor-in-chief, who suggested he focus on shoes when he had a meeting with her in New York in 1969.“To be honest I wanted to do theatre design, but alas Ms Vreeland said that I should do shoes,” Blahnik has said. Within a couple of years he was making shoes for Ossie Clark, and then, with a loan of just £2,000, he opened his first boutique, in Old Church Street, Chelsea.

At the Wallace Collection, visitors will be able to feast on 130 designs that he has created since then. For Bray, it’s a tantalising opportunity for visitors to see the museum through Blahnik’s eyes. “It’s like meeting someone from the 18th century, exported in time, and that’s a real pleasure for any curator,” adds Bray. “He reminds me a lot of [that era’s] marchands-mercier– the taste-makers who sold objets d’art and created fashionable pieces of furniture, porcelain or decorative pieces. Manolo gets individually involved with making the shoes, bringing all these materials – jewels, silks, fur – together in the most exquisite way.”

And perhaps Blahnik, who notably has made his home among the Georgian splendour of Bath rather than London, is from another time – always immaculately dressed in his Anderson & Sheppard suits with his impeccable old-school manners, refusing to kowtow to fleeting trends and fads. As a result he’s been at the top of his game for half a century. And for Bray, he has truly earned his place among the old masters. “He’s someone who still uses our great collections and he takes inspiration from them, but he doesn’t copy. He absorbs it, digests and creates – and that is a sign of a great creative mind.”

An Enquiring Mind: Manolo Blahnik at the Wallace Collection is on until 27 October. wallacecollection.org