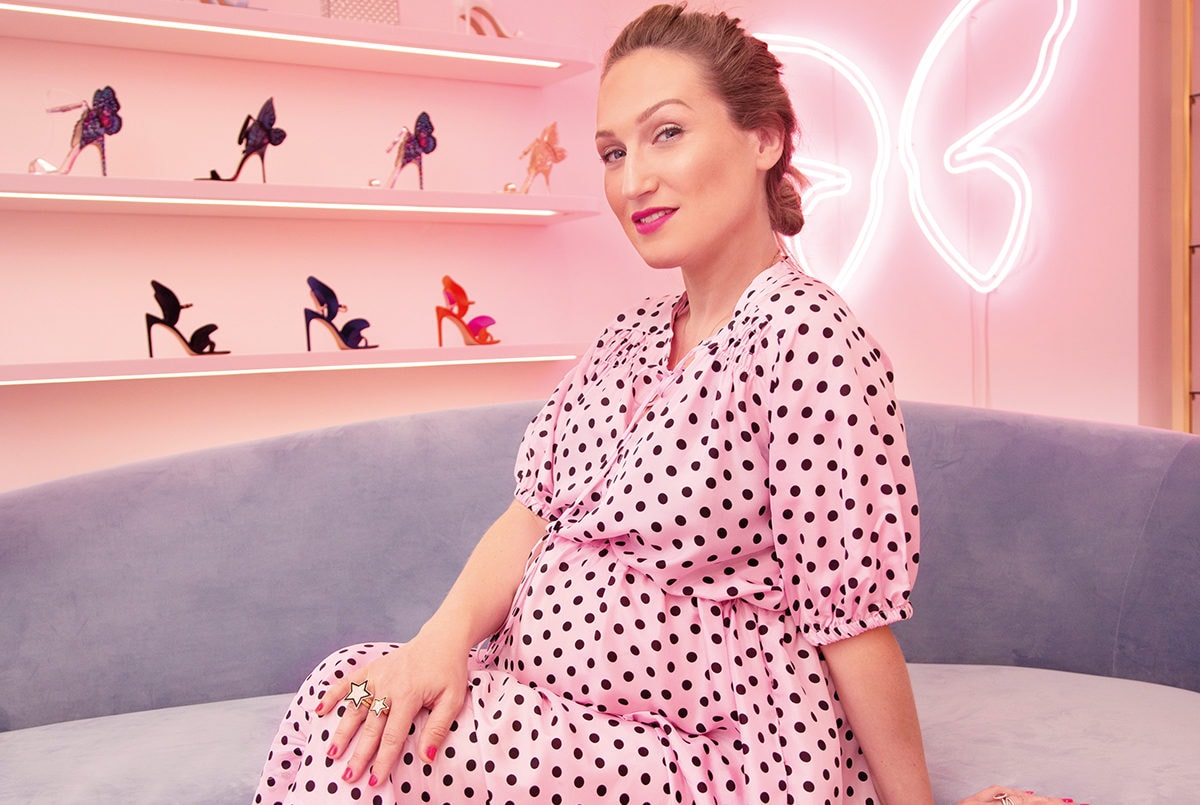 In the archive: Inside Sophia Webster’s dreamlike Chelsea boutique

The fairy godmother of footwear unveils her ethereal vision

From art deco architecture to designs infused with ballroom glamour, footwear supremo Sophia Webster took us inside her Chelsea store as it opened, in this interview from June 2018.

Stepping into Sophia Webster’s east London studio is like falling down a fantasy-filled rabbit hole. Upon entering the office space through a floral-filled archway – a leftover prop from the designer’s wedding to husband Bobby Stockley in 2014 – one finds a reception area filled with candy-coloured furniture and bathroom doors with embossed plaques that read “mermaids” and “mermen”, not men and women. Webster’s office is, however, where the decor really takes hold: on the wall is a neon sign that reads “Cinder Freaking Ella”; on the shelves sit books on Disney and art deco architecture, and overhead hangs a giant crystal chandelier finished with 14 glass-blown pink flamingos, which is soon to take up a residency in the designer’s new store on Sloane Avenue, Chelsea.

It’s not at all surprising. Since launching her namesake brand in 2012, 33-year-old Webster has built a megawatt global business –winning the coveted British Fashion Council’s Vogue Fashion Fund in 2016 – and has, in the process, become the millennial fairy godmother of footwear. With a sprinkling of Swarovski crystals and a dazzle of magic dust, the London-born designer conjures up collections that wouldn’t look out of place on a princess – or celebrity; her designs have been worn on the red carpet by the likes of Taylor Swift and Rihanna. Her famed Chiara stilettos meanwhile, which no doubt bring good fortune to the wearer with one simple click of the wing-embellished heels, have been worn by Mariah Carey.

“I think I’ve always been a bit of a dreamer,” says Webster, sitting at her desk upon which is a bouquet of fresh peonies in a cartoon Frida Kahlo vase. “I like to tap into that fantasy part of my imagination, that hyper femininity. When I started the brand, womenswear was very masculine and everything seemed quite neutral and minimal. I wanted to come out with something that felt fresh.” That something fresh has expanded rapidly since launch: today, the brand is stocked in more than 200 outlets internationally, including Harrods, Harvey Nichols and Selfridges in London, and the range now includes bridal and children’s footwear as well as a full handbag collection. This year sees the opening of her second store in the UK capital.

“I felt like now was the time to open another space,” she says.  “One big enough to house all the collections and store exclusives. You’re limited with how much product you can have in a store based on the size of the stockroom. We have greater scope with Sloane Avenue.” Spread over two floors and bedecked in Webster’s signature warm pastel tones with plush carpets and velvet furnishings, the new store will have a dedicated area for the kids line and a bigger space for the bags. It will also house a beauty salon and private shopping area, where shoppers can book in for a pedicure while picking out the perfect pair of platforms. “We get a lot of bridal parties coming into the Mount Street store,” she says. “They have Champagne, try on shoes, and have fun. We have a dedicated space for this in the new store – we’re responding to what the customer wants and trying to extend that whole brand experience.”

Webster has always been about brand experience. Each London Fashion Week presentation gives the designer the chance to create an alternative reality; for Autumn/Winter 2018, Webster took over the sumptuous Pompadour ballroom at the Hotel Café Royal on Regent Street, where sequin-adorned models sat atop giant twirling mirror balls, and others in fluffy shoes stood on podiums wafting vast feather fans. The theme? Baz Luhrmann’s 1992 movie Strictly Ballroom. “That film is particular a favourite of mine, especially because me and my sister did ballroom dancing for years so it’s quite a nostalgic watch now,” says Webster, who regularly performed in the glitzy gilt of Blackpool Tower’s ballroom. “The sequins, the outfits, the routines, competitiveness… At the time, we would watch it obsessively. I’ve always tapped into different parts of my passions to draw inspiration from.”

The collection includes ballroom-worthy sandals in chartreuse yellow with tassled straps that snake up to the knee that are perfect for the tango, and stilettos covered in crystal and pearlescent fruits made for doing the mambo. Bags are emblazoned with Webster’s signature cutesy catch phrases, including “I Don’t Need a Mango to Tango”, and “She’s The Perfect Dancer”. (In line with this, Webster’s bridal shoes come transcribed with “Wifey for Lifey” on the soles.)

The Pompadour ballroom was decorated with trophies she and her sister won throughout their dancing years. “That was an accidental inclusion,” she jokes. “We wanted them for the set, and I thought my mum might still have a few of ours left – it turned out she had crates and crates of them. It was quite nice to see them all out again. I wasn’t trying to show off.”

The glamour of her ballroom dance days is also a major influence in her designs. “I think the way I’d put a collection or a presentation together is similar to how I used to design my dancing costumes,” she says. “For dancing, you want to pick colours that are going to get you noticed, so there are lots of bright, vivacious shades. And lots of different kinds of embellishments, sparkle and sequins, and things.” Cue collections that include the bestselling Bibi pointed ballet flat rendered in Crayola-coloured suedes and finished with iridescent wings, clashing animal print sandals, and candy hued sneakers with glittery toe caps. So synonymous are her two worlds, that the Swarovski-encrusted version of the Chiara heels are today embellished by the same Croydon-based company that made Webster’s dancing dresses.

As she grew older, her ambitions for her dancing costumes grew ever more elaborate, and her instructions to the makers more “specific”, she says. It’s perhaps serendipitous that Webster became a designer – after all, she was a designer of sorts before she ever really knew what a designer was. Yet it’s perhaps ironic that the type of ballroom Webster practiced in meant she danced barefoot; it’s also perhaps ironic that her favourite Disney princess is in fact Ariel, who for the most part of the tale, has no feet at all.

It’s clear that Webster is anything but conventional. A student of fine art, she only realised her passion for footwear during a life drawing class in her foundation year. “Instead of it being a hairy, naked man, it was a fashion model – she brought lots of clothes with her and we had a certain amount of time to sketch each look,” she says. “I kept focusing on and drawing the shoes, and that was it.” While all the other art students were making sculptures, Webster designed and made shoes for her final project. She became the second footwear designer ever to win the British Fashion Council’s Vogue Fashion Fund and last year teamed up with Puma for an exclusive capsule that applied her tropical sense of irreverence to streetwear.

She credits much of her success to this same sort of fatalistic, happy accident. The launch of her now immensely popular bridal line coincided with the designer’s own wedding, when she realised there “was nothing on the market that I wanted to wear for my own special day”, she says. Same too, for her kids collection. “There was no strategy; that happened because I was pregnant with my daughter, Bibi, now three. I wanted her to wear the same shoes as me. And it turns out, other women want to dress their little girls up as well.”

That the brand is so digitally native Webster also attributes to a mere coincidence of timing as Instagram was in its infancy when she launched her e-commerce business. Today, the @sophiawebster account has more than one million followers and 50 per cent of the Mount Street store’s activities are digital – customers either click and collect in-store, or visit to try the shoes on and get a feel for the brand before ordering the shoes online. Designed to complement each other, the store even has an area for digital user-generated content, where shoppers can stand in front of huge neon Chiara wings and pose for a selfie, and, naturally, the photo booth is equipped with its own hashtag.

But of course, none of it was really accidental. Webster’s bright and breezy charm and long golden locks could have been taken from a story book, but the designer is a canny business woman who, unlike the princesses in such fairytales, definitely doesn’t leave things up to chance. Realising not every woman wants shoes covered in spangle all the time, a newly released core collection of simple strappy sandals come in a range of heel heights to suit every taste, and age. And price point: the sandals retail for £250 and serve as a new entry level into the brand.

“Fairy stories offer an escapism,” she says. “But sometimes, when I’m watching a Disney film with my little girl, I find myself saying, ‘You know, it’s not always going to work out like this.’” A pair of shoes might have changed Cinderella’s life, but Webster’s daughter will no doubt be under no such illusion. Thankfully, her mummy has a pair of shoes to counter that: colourful courts that read “Boss Lady”. Those ones are for princesses that don’t need to be saved.

This interview was originally published in the Summer 2018 issue of The Glossary.