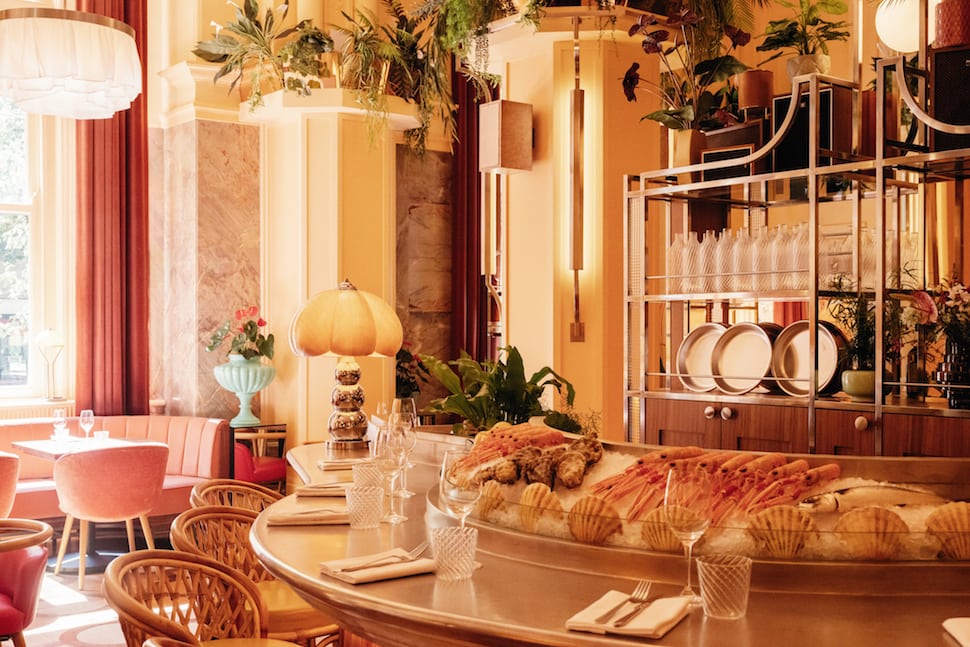 The world is your oyster with these under-the-sea eateries

Native to the city it is not, of course, but there is still a plethora of choice when it comes to indulging in the sea’s most tantalising offerings across London. Centuries-old institutions, serving traditional recipes of classics (think fish pie and linguine), sit alongside recent openings, where seafood is given a modern spin. Whet your appetite and delve into The Glossary’s guide to under-the-sea dining in the capital. 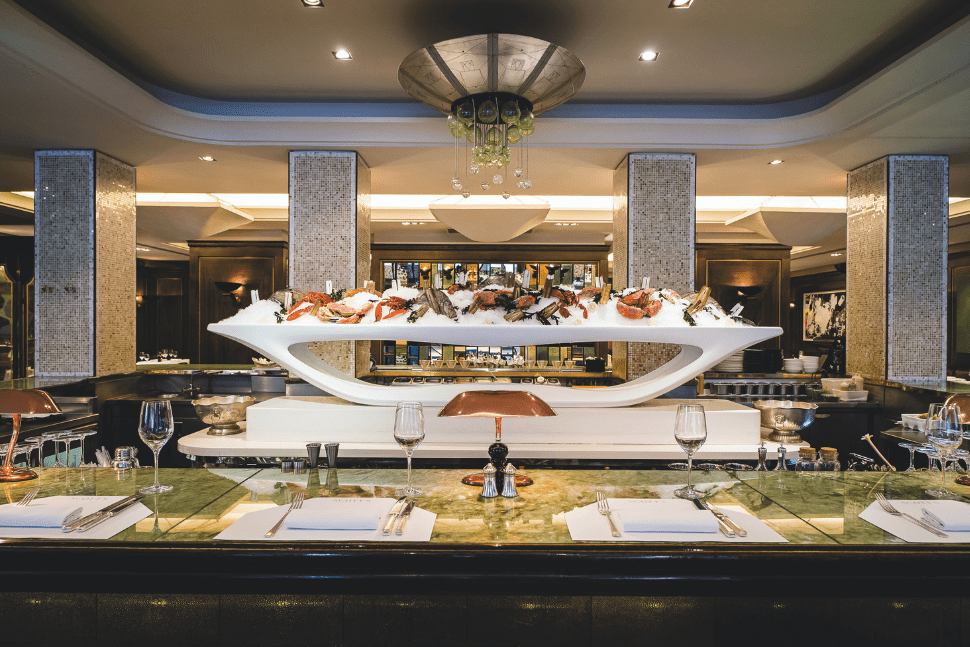 There’s no shortage of brilliant bivalves on offer at this Mayfair seafood institution, originally founded by fishmonger John Scott on Haymarket in 1851. From my perch at the onyx-topped bar (the best seats in the house, in my view, whatever anybody says about tables 10, 11 and 12), I can admire an array of rock oysters glistening on ice atop the three-metre-long Future Systems-designed crustacea counter introduced to Scott’s on its 2006 reopening. The best are those from the Île d’Oléron, prized for their delicate salinity. Another essential order is Scott’s signature seafood cocktail, rich with prawns and lobster; it’s a London classic.

Dave McCarthy, head chef since 2009, knows when to leave well alone – smoked salmon and Dover sole, for example, are comme il faut – but there’s character to his cooking too. I love the calamari pasta with lobster, prawn and crab, the truncated al dente tubes playfully mirroring the pearly white rings of tender squid; and I appreciate the chilli kick that animates the elegance of John Dory with saffron potatoes and shellfish dressing. A buttery Waipara Chardonnay pairs beautifully with both. A hat tip, too, to the pastry chef whose Bakewell tart with almond ice-cream is pure nostalgia and whose charming peanut butter and jelly “choc ice” with sugared blueberries and a cute fruit roll-up reimagines American childhood flavours for a grown-up audience.

What to drink: Champagne en magnum 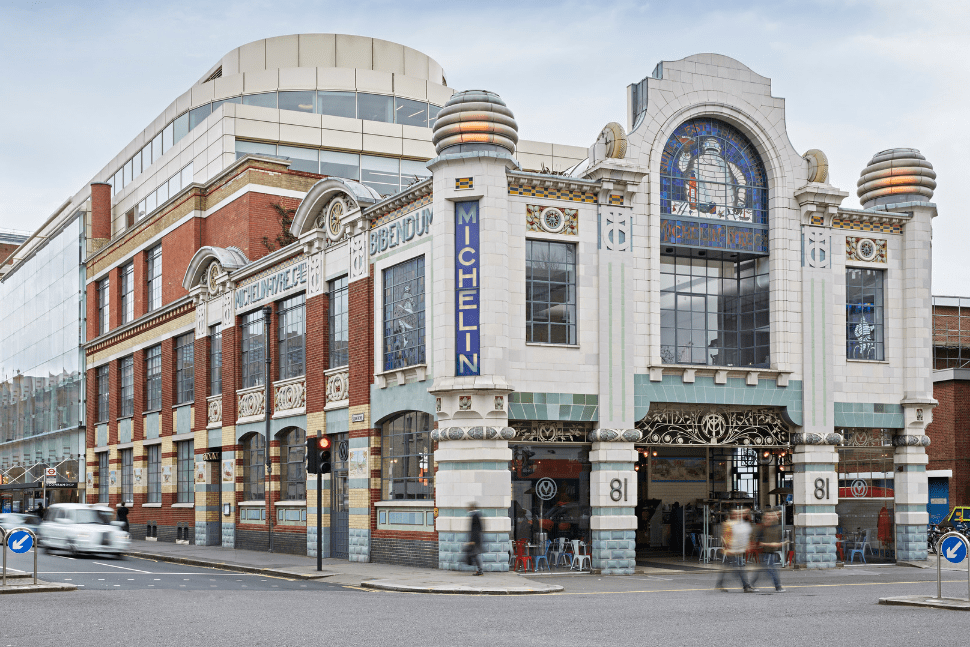 The vintage oyster bar on the ground floor of South Kensington’s iconic Michelin House – ever the head-turner – always starts the season in grand style. Its oyster selection remains undoubtedly one of the best in town, with nine varieties to try, including “spéciales” from Maison Gillardeau in Normandy (dubbed the “Rolls-Royce” of oysters), gnarled Jersey rocks, and Tsarskaya oysters from Cancale, characterised by their iodine tang and a hint of acidity on the finish. Ticking off a selection on a docket – dim sum style – with a cute “I stole this from Bibendum Oyster Bar” pencil is a fun way for both aficionado and amateur to explore the various oysters’ nuanced flavours and textures.

Bivalves aside, there’s a terrific menu by Claude Bosi (holder of two Michelin stars at Bibendum’s first floor restaurant), who has introduced such Gallic greats as moules frites, soupe de poisson and snails with garlic butter, while the weekend brunch menu wants to ease you into the day in indulgent fashion. Expect squid, shrimp and cheddar toasties, linguine with lobster and chilli crab, and the “Bibendum LBT”. Hint: the “L” stands for lobster.

What to drink: Billecart-Salmon Even before it shucked its first oyster, Neptune at the Grade II-listed Kimpton Fitzroy (formerly, the Hotel Russell, est.1898) was being hailed as “London’s coolest new restaurant”. Its creators, Aussie chef Brett Redman (Jidori, Elliot’s) and Texan stylist Margaret Crow have form: their much-missed Hackney hangout, the Richmond, was frequented by every fashion designer east of Mount Street. They, along with Russell Sage Studio, have done a grand job converting the famous dining room (the hotel’s architect Charles Fitzroy Doll followed it up with the Titanic’s) into a Bistrotheque-meets-the-Wolseley all-day brasserie with a delirious design scheme that combines kitsch bamboo, retro speakers and zany graphics with the original Victorian features.

Redman’s cooking is a little more restrained, balancing a classic oyster bar menu – the pewter-topped crustacea counter takes centre stage – with the requirements of a midtown hotel grill room (timorous eaters can stick to sirloin steak and dripping chips) and Redman’s urge to innovate. Classic pairings take an unexpected turn, for example red prawn agnolotti in a pale gold sansho pepper broth and creamy burrata, melon and Vesuvio tomatoes with perfumed shiso in place of predictable basil. Even better, the seafood platter for two: it arrives with a metaphorical “ta-da”, abundantly loaded with Morecambe bay oysters, creamy Essex kumamotos, spider crab legs (well worth all that cracking and picking), trout tartare and more besides with doorstep slices of homemade soda bread. I can’t think of a more agreeable way of shelling out £38. To drink, perhaps an Albariño from the Isabelle Legeron-curated natural wine list. 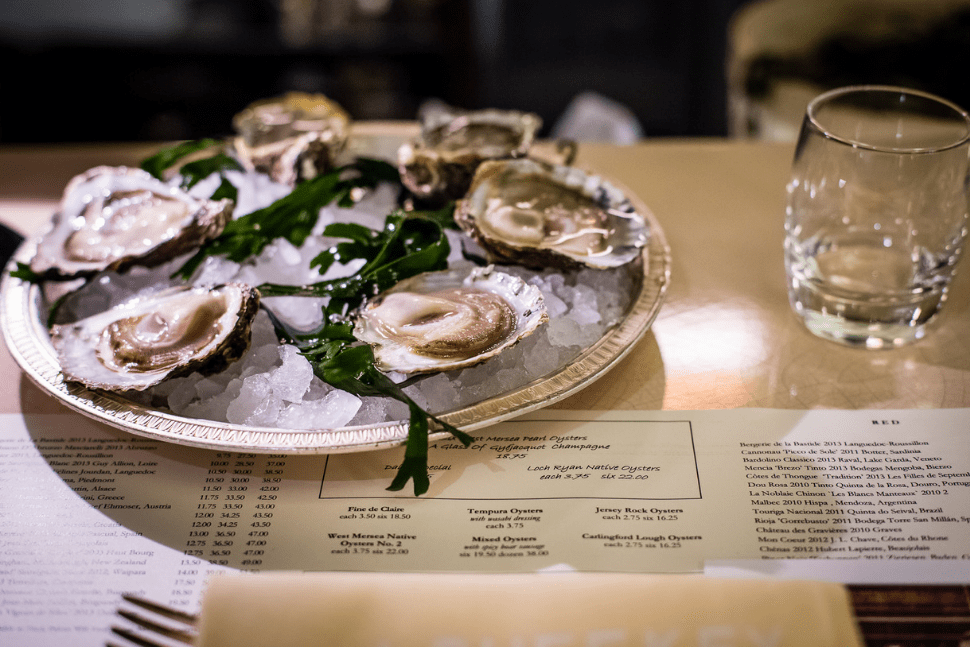 The next-door-neighbour and informal spin-off of the Theatreland institution, J.Sheekey Atlantic Bar & Terrace has been serving seafood for more than a decade, with patrons perching at the lively horseshoe-shaped bar to enjoy a glass of Delamotte Champagne and a half dozen Jersey Pearls (a snip at £19.75 all in) or the full plateau de fruits de mer (lobster optional). Rock oysters from Lindisfarne, Menai and Carlingford are year-round hits, and the experts say native oysters get better as it gets colder, so if you leave it a few weeks into the season, you can always enjoy them alfresco on Sheekey’s terrace, which is prepped for the winter weather with heaters and cosy blankets. The wine list is cleverly categorised by coastlines: turn to the Atlantic section for a bone-dry Muscadet or lively Vinho Verde.

Sunday here is all about the Bloody Mary, which comes in different guises: Classic, Bourbon Mary and Red Snapper. Food-wise, it’s a brunch bonanza with the likes of tuna poke tostadas with blood orange and chipotle chilli and Sheekey’s seductive mac and cheese with shrimp, Cornish crab and bacon, all to be devoured to the sounds of a toe-tapping line-up of weekly musicians.

What to drink: Vintage Krug 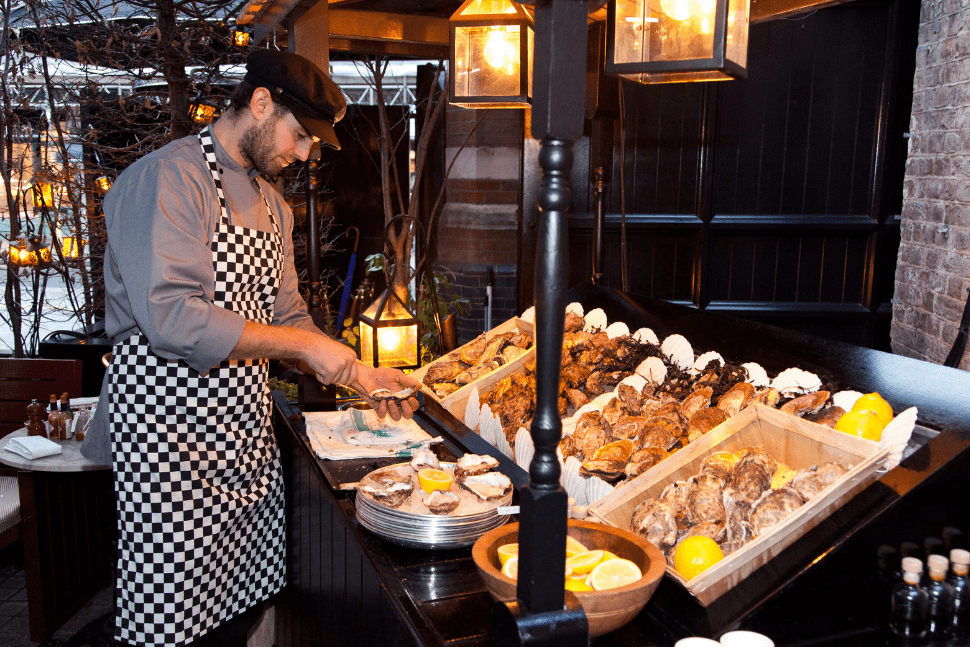 Casanova, a man of many appetites, was reputed to breakfast on 50 oysters a day to boost his legendary libido. Latter-day libertines can test these claims at Chiltern Firehouse, owned by hip hotelier Andre Balazs, where the oyster cart, manned by in-house expert Bobby Groves, takes pride of place throughout the season. Oysters, from the regularly rotating line-up are sold singly so one can conduct a gastronomic tour of the British Isles from West Mersea to Whitstable and down to the Teign Estuary in Devon in a single session. The connoisseur’s choice is natives from Loch Ryan, whose oyster beds date back to 1701. The best way to savour their creamy flesh and nutty depth of flavour is with no more than a drop or two of lemon, some Coombeshead Farm sourdough and a glass of crisp Bordeaux Blanc. For a modern spin, try Pacific (rock) oysters from Devon with Japanese-influenced shiso granita or ponzu sauce.

Elsewhere on the menu, executive chef Nuno Mendes has reimagined the classics, adding an American spin, with fish and seafood often taking centre stage. Dishes such as red prawn ceviche and native lobster tacos are stalwarts, while the feather-light crab donuts have become the stuff of legend. So, too, the oh-so-moreish black truffle and cheese fries.

What to drink:  The “Mary Celeste”, a Bloody Mary variant with Tanqueray Ten Gin, mignonette and, of course, oyster Wiltons of Jermyn Street, the 277-year-old favourite of politicians (awarded a prestigious “Green Plaque” in recognition of its contribution to Westminster life), remains blissfully unchanged. To dine here is to take a journey back in time. Such correct but unfailingly charming hospitality is almost impossible to find elsewhere. While we don’t actually have a fleet of waiters all to ourselves, it somehow feels as if we do.

The kitchen shines in autumn, as it celebrates the joyous synchronicity of the seasons, as native oysters and feathered game arrive in tandem. While it may be courting gout to indulge too frequently, it’s hard to say no to a half dozen Loch Ryan oysters and traditionally garnished roast grouse. Wiltons is a kitchen run without ego, where the guest comes first, hence its impressive range: Scottish lobster, for example, comes grilled, cold, Thermidor or Newberg, while Dover sole is grilled, à la meunière or in goujons. Opportunities to explore the bountiful British larder are plentiful. Oyster virgins can take the plunge with cooked oysters “Rockefeller” (baked and breadcrumbed) or “Beau Brummell” (fried with chilli); and oft-overlooked classics such as beef consommé, sole “Véronique” and Scotch woodcock are ripe for rediscovery. The wine cellar is similarly “old school”, Champagne, Burgundy and Bordeaux being particularly well represented.

Wiltons holds an oyster masterclass on the first Monday of every month from September. What head oysterman Filippo Salamone doesn’t know about oysters isn’t worth knowing.

Kaspar’s at The Savoy, Strand

Not all seafood restaurants are hooked on classics. At the Savoy Hotel, the 130-year-old grande dame’s Art Deco-style restaurant and oyster bar, Kaspar’s, takes provenance and seasonality as the starting point for a menu informed but never bound by tradition. We begin with “Best of the Seas” from the seafood counter, a marine journey that takes us from the British coastline for hand-dived Scottish scallops, oysters and sweet Cornish crab to the Bering Sea for its prized king crab and the Mediterranean for rosy pink prawns. The kitchen’s creative streak is foregrounded in intermediate dishes such as smoked salmon tartare, dramatically paired with charcoal melba toast and keta caviar and the signature hen crab and lobster bisque with a judicious hint of Espelette pepper for piquancy. There’s a technical twist to a clever “principal” dish of North Atlantic halibut in the form of its own lightly smoked roe and burnt mussel fumet.

For the true grill experience, as befits the chic chequerboard-floored, silver-leaf-ceilinged space, look to stellar ingredients such as Brittany poussin, Isle of Harris lobster and Newlyn Dover sole cooked over the lava stone grill. From a choice of “timeless sauces” we take lemon hollandaise and shellfish nage with the lobster, ringing the changes from one of Kaspar’s “sides of the moment”, heavenly truffle-laced pomme purée.

Bentley’s iconic oyster signage shines down on Swallow Street, stopping me in my tracks as I scuttle between Piccadilly and Regent Street. Oh go on then, a few oysters at this 103-year-old establishment won’t hurt. Irish chef Richard Corrigan’s oyster bar and grill seems to inspire spontaneity. As luxurious pick-me-ups go, it doesn’t get much better than a seat at the cool marble counter, a chat with the shuckers and a glass from the Champagne bottle on ice at the bar.

The oyster selection is as strong as ever. Natives Loch Ryan and West Mersea No.2s, alongside rocks from Carlingford, Jersey, Achill and Dorset, are deftly prised open by the fastest shuckers in town (Bentley’s Federico Fiorillo is the reigning British Tabasco Oyster Opening Champion). Purists argue that oysters should be eaten au naturel with a few drops of lemon – mignonette if you must – but maybe they haven’t tried Bentley’s moreish Vietnamese oysters spiked with chilli, ginger, lime and fish sauce.

Look out for Bentley’s oyster masterclasses (£65) this year, an education in shucking, serving and tasting these moreish, mineral-rich molluscs. The wise student will stay behind after class for further education at the bar. Top marks.

What to drink: Half pints of oyster stout