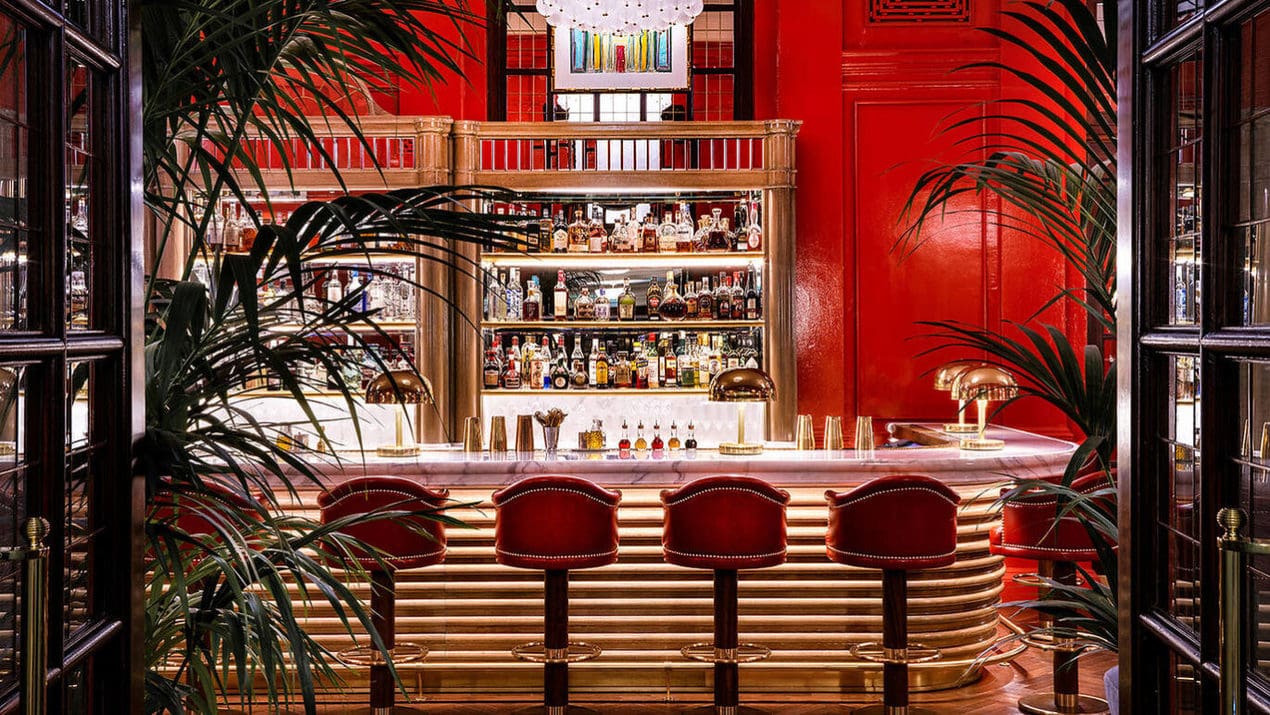 The best bars to impress your date in London

From flamboyant night spots to under-the-radar cocktail haunts, we’ve rounded up the capital’s most romantic drinking establishments that are guaranteed to impress

Whether you’re looking for a speakeasy that harks back to a bygone era, a laid back wine bar where you can work your way through the list or a side of live entertainment to go with your tipple, London has you covered. Here is where to go when the stakes are high

The Blue Bar at The Berkeley 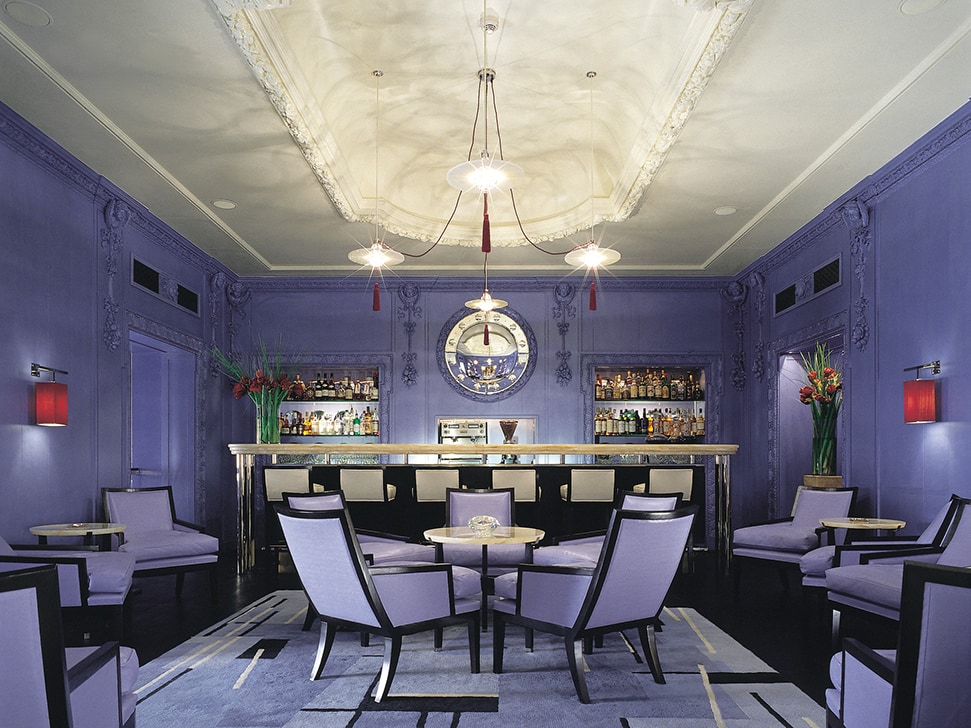 Not many rooms in London can rival the Blue Bar at The Berkeley for wow factor. Designed by the late David Collins, the Irish architect behind The Wolseley and J Sheekey, the jewel-box pretty bar’s striking colour is made up from 50 different shades of blue and is entitled ‘Lutyens Blue’, named after the original panelled walls designed by Sir Edward Lutyens. The drinks here are just as colourful and all 16 on their menu are actually colour-coded according to their flavour profile, ranging from green for lighter, low-alcohol options, to yellow for champagne-based cocktails and red for ‘Rich and Bold’, which are knock-your-socks-off strong. The bar recently underwent a major makeover, and while they kept most of the original standout features they also added a smart fibreglass extension, which means there’s now plenty more room for late-night revelry. 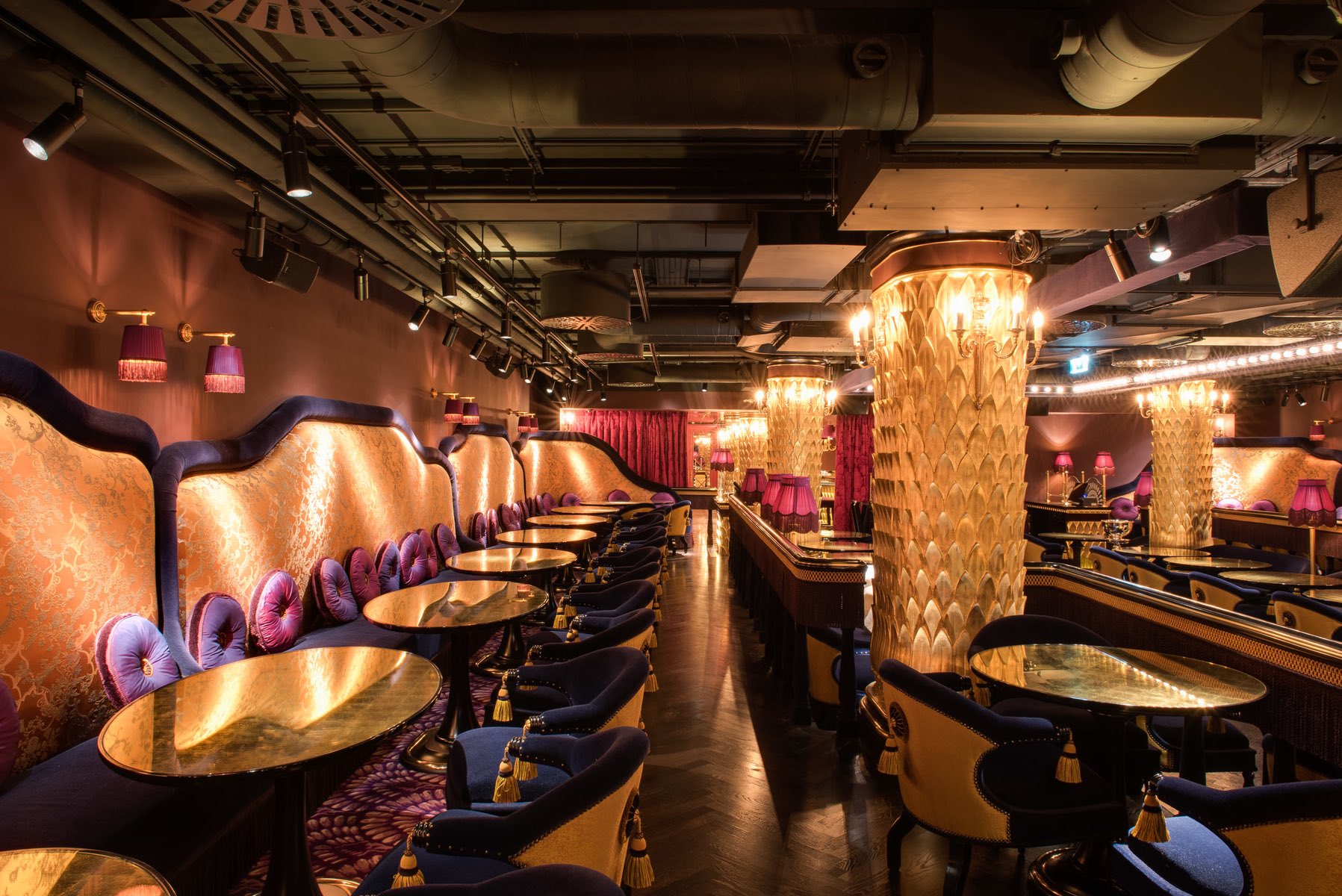 As soon as you arrive at the red-carpeted stairs that lead up to Park Chinois’ entrance, you know you’re in for something special. Climb those stairs, walk through the double doors and you’ll find yourself in a sumptuous blood-red reception room that leads onto the lavish Salon de Chine restaurant – but the real magic is found in the Club Chinois bar downstairs. Modelled on the glamorous supper clubs found in Shanghai in the Thirties, the mood here is gloriously decadent, with golden pillars, velvet chairs, candles twinkling from every table and live entertainment from a variety of eclectic cabaret acts – think fire-eaters and death-defying aerial artists. Order one of their potent signature cocktails like the Rouge Intime, which comes with Konik’s Tail vodka, rhubarb liqueur, raspberry cordial, lavender-infused acacia honey and lime, and settle in for the show.

The Nickel Bar at The Ned, the City 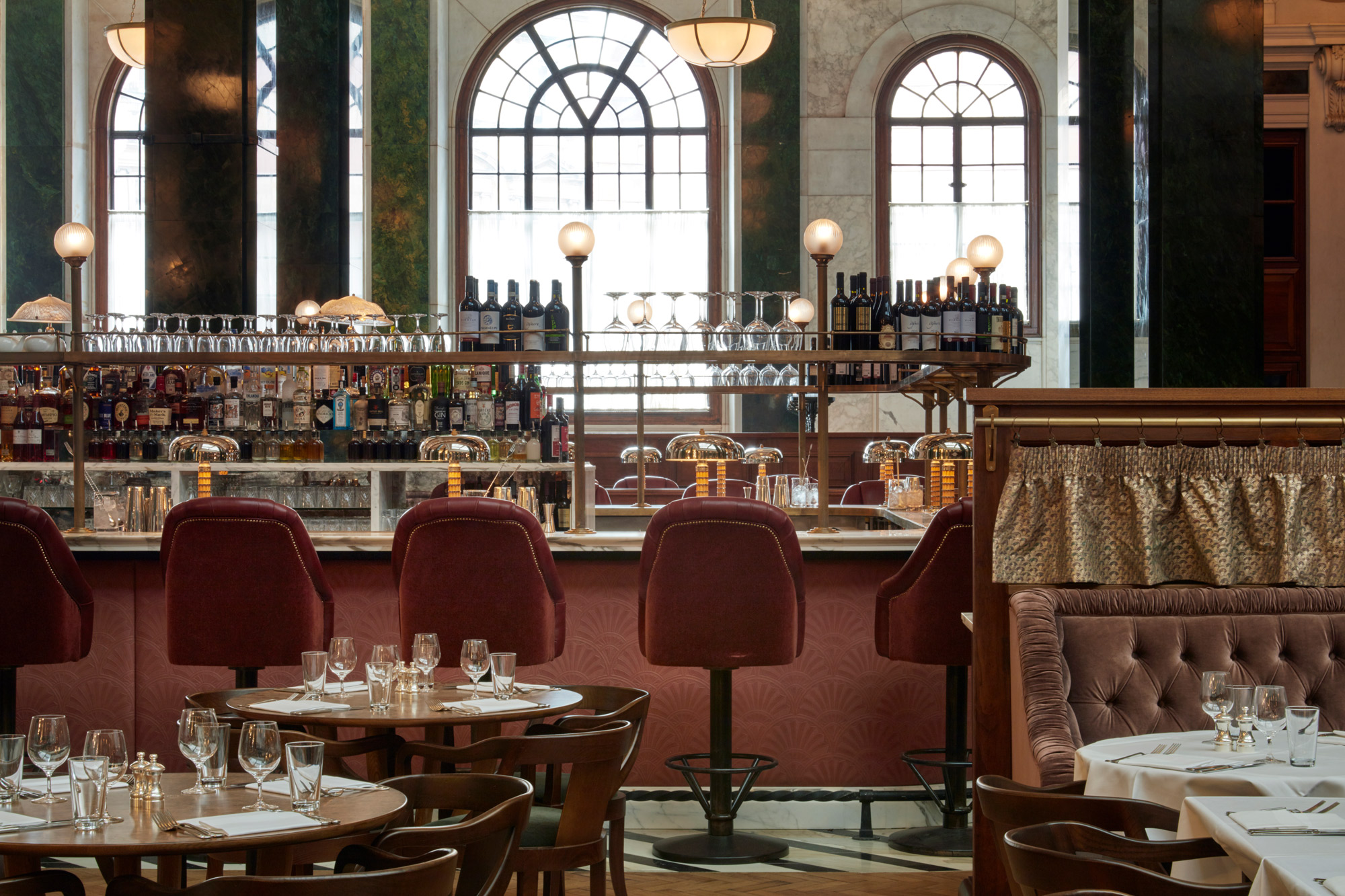 While it may be in the heart of the City, the Nickel Bar at the sprawling Ned hotel and members’ club has a distinct old school Manhattan feel, with its marble-topped bar, grand stone columns and leather-lined bar stools. The drinks menu only adds to the vibe, focusing on timeless staples from across the US, each one inspired by a favourite American city. The Jewel of the South draws on New Orleans’ cultural melting pot, mixing Bacardi Ocho, Select Aperitivo, Maraschino, mango and citrus, while The Golden City is an homage to San Francisco, with Porter’s Tropical Old Tom, Umeshu, lemon, elderflower, cherry and passion fruit kombucha. You’re always sure to spot a few characters here, either spilling out of neighbouring Cecconi’s for a late-night drink (the bar stays open until 2am) or pulling up a stool to listen to the latest act performing on the adjacent Nickel Stage.

The Coral Room at the Bloomsbury Hotel, Bloomsbury 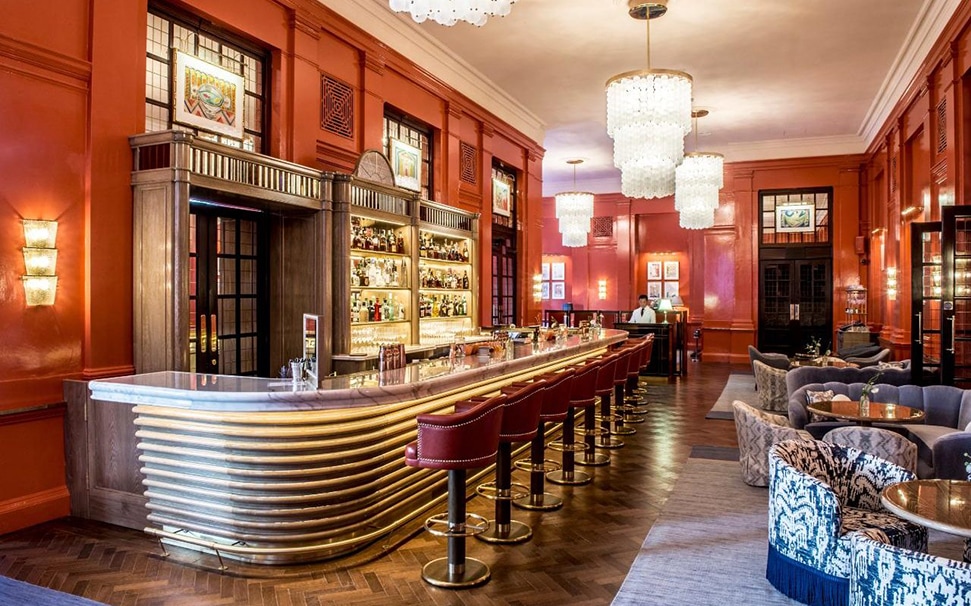 Any date will be suitably impressed by the gloriously over-the-top interiors at the Coral Room, designed by interiors mastermind Martin Brudnizki (the man behind Annabel’s and Scott’s). The cavernous main room wouldn’t look out of place on a Wes Anderson film set, with its eye-popping coral walls, enormous Murano glass chandeliers and baby blue scallop-edged sofas. There’s an extensive cocktail list, all inspired by different spots across England, from Newquay to York, but the real star of the show is the excellent selection of English sparkling wines, one of the largest offerings in London. In need of a talking point? The 36 pieces of art dotted around the bar are all original and created by young British artist du jour Luke Edward Hall, depicting scenes of the local area and Sir Edward Lutyens’ work (the Grade II-listed building was designed by the acclaimed architect). 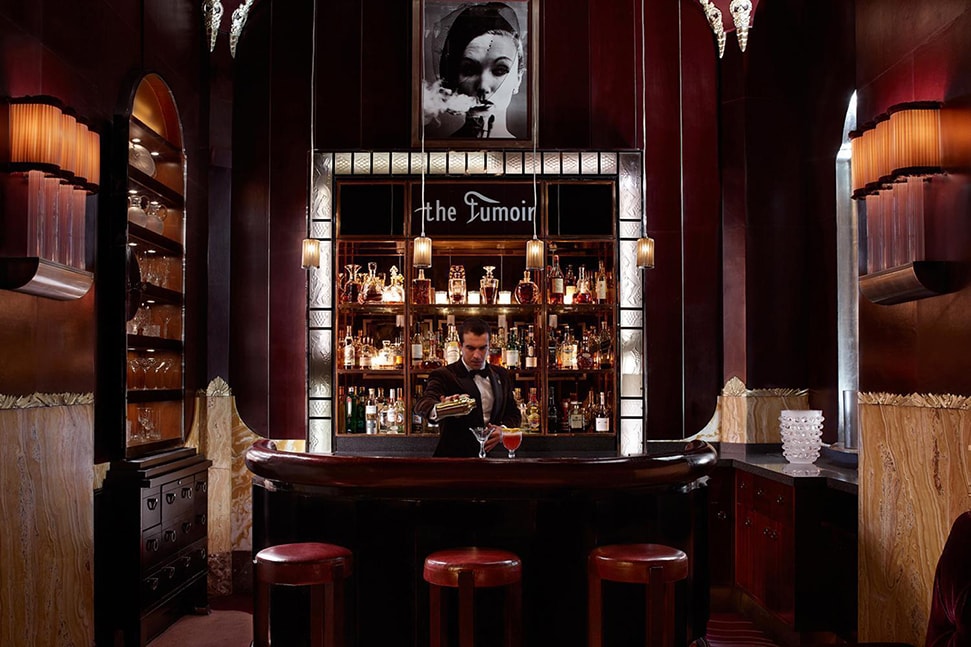 There’s nowhere quite like Claridge’s for a special occasion, but those in the know bypass the main bar in favour of the more discrete Le Fumoir. Tucked away in the hotel’s art deco interior, the tiny former smoking room holds only 12 people, further adding to its clandestine charm. Inspired by the Thirties, the interiors are retro glamour personified, with ruby-red velvet seating, deep aubergine-coloured walls and sultry Lalique crystal lighting – it’s not hard to figure out why this is the place where legendary illustrator David Downton chose to draw his fashionable subjects. The expertly crafted cocktails follow a similarly retro theme – ordering a drink from one of the impeccably trained bartenders, dressed in black tie behind the marble horseshoe bar, and watching them mix it is a spectacle in itself. For something extra special, order one of the fine Macallans, which are served from a Lalique decanter.

The Cocktail Bar at the Zetter Townhouse 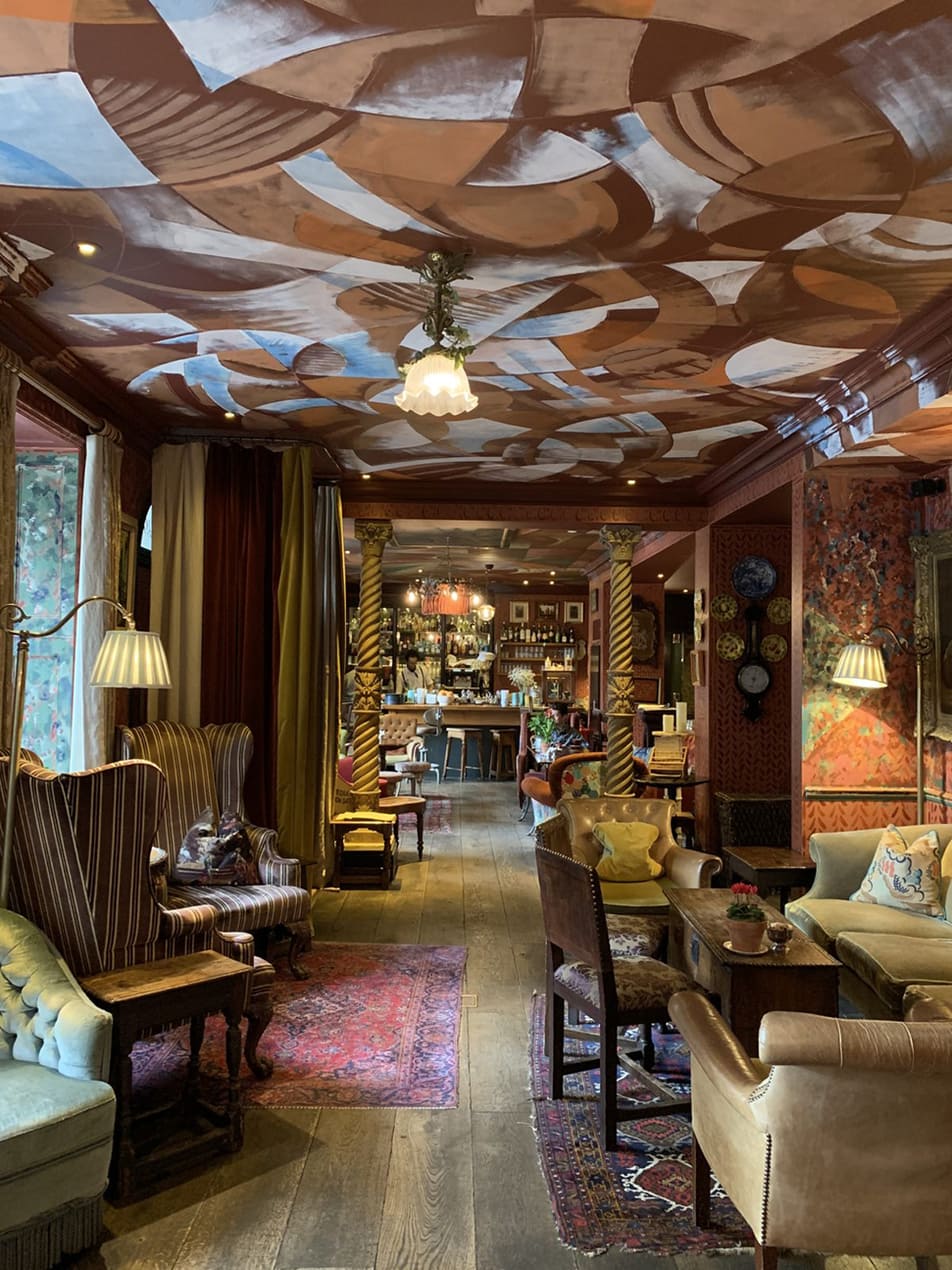 Hidden away at the edge of St John’s Square sits an unassuming Georgian townhouse with a pale blue door. And behind that pale blue door is a brilliantly bonkers cocktail bar, part of the stylish Zetter Townhouse hotel. Designed to look like the sitting room of your eccentric great aunt, the interiors are as much of a talking point here as the inventive cocktails. Every wall is lined with gilt-framed paintings, tapestry rugs cover the floor and a stuffed parrot peers down at you as you settle into one of the leather armchairs. The cocktails, served from behind an apothecary-style bar, pay homage to the area’s distilling heritage, inspired by old recipes for bitters, tinctures and herbal remedies. Try the Urfa Biber Old Fashioned, made with bee pollen peated cognac, cassia and isot pepper tincture – your great aunt would definitely approve. 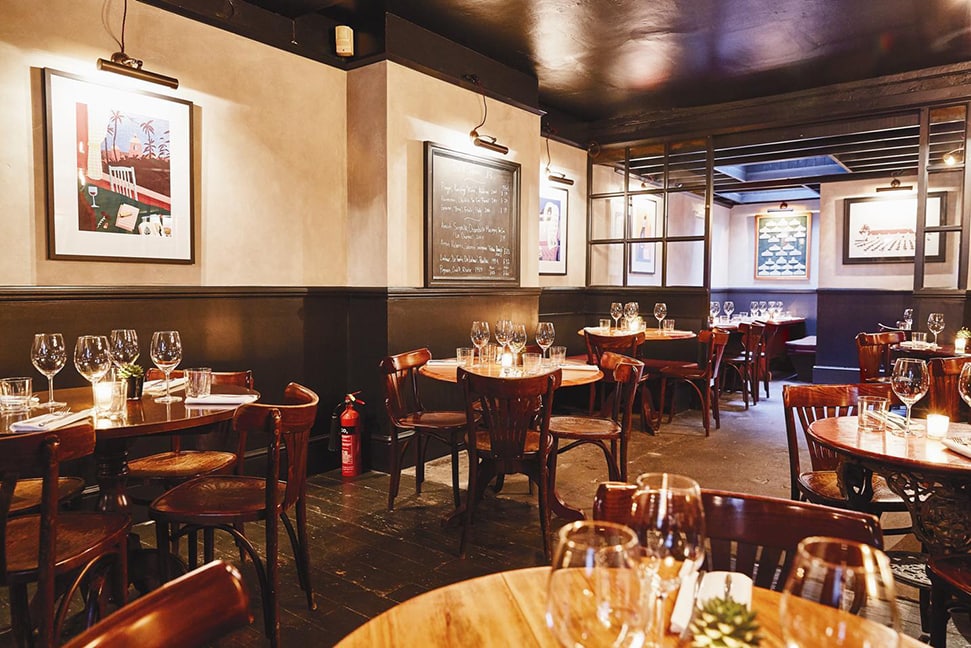 This cosy, Parisian-style wine bar on charmingly Dickensian Lamb’s Conduit Street is often billed as the most romantic wine bar in London, and it’s not hard to see why. Intimate, laidback and full of atmosphere, with candlelit tables crammed together and a roaring fire in colder months, it’s home to one of the most comprehensive and well-balanced wine lists in London. Don’t be daunted by the amount of choice – there are both accessible and fine and rare wines on the menu, with plenty of options by the glass, and the friendly staff really know their stuff when it comes to recommendations, as well as which small plates from the menu each one goes best with. Don’t forget to pick up the latest edition of their feted wine magazine while you’re there – you’ll find its cool front covers lining the walls, and illustrations from the mag in the loos. 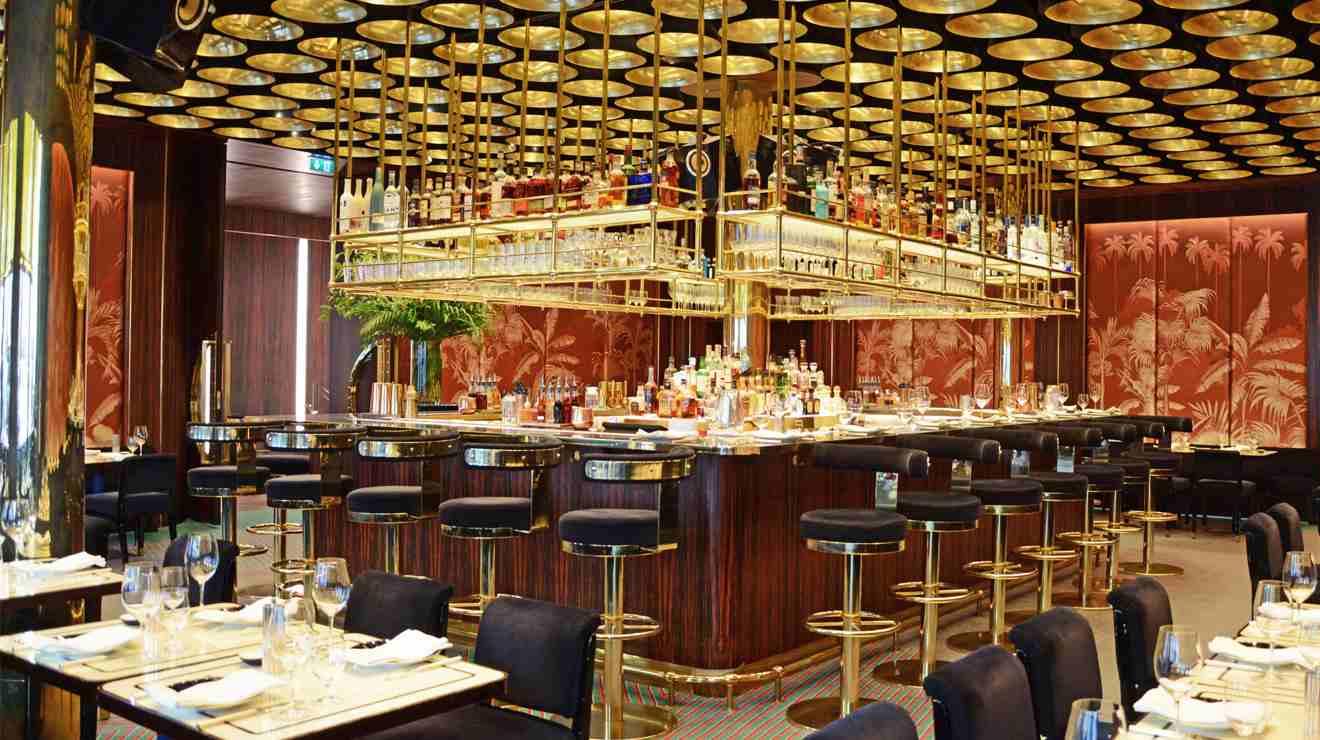 Owned by Chilean nightlife king Juan Santa Cruz, the man behind Notting Hill hotspot Casa Cruz, this discrete bar and restaurant on Albemarle Street is a firm favourite with the fashion set and well-heeled locals, who love it for its glamour and elegance. The first thing you notice when you walk in is the warm, honeyed shade of gold, which emanates from the enormous square bar in the middle of the room and the hundreds of discs shimmering on the ceiling. The bathrooms here are no less spectacular, with walls covered in hand-painted silk De Gournay wallpaper. But the really hot ticket at Isabel is Santa Cruz’s ‘personal living room’ downstairs, which comes with its own bar and DJ booth and is strictly invitation only. Order a few rounds of the Isabel martini and do whatever it takes to get yourself down there.

The American Bar at The Savoy, the Strand 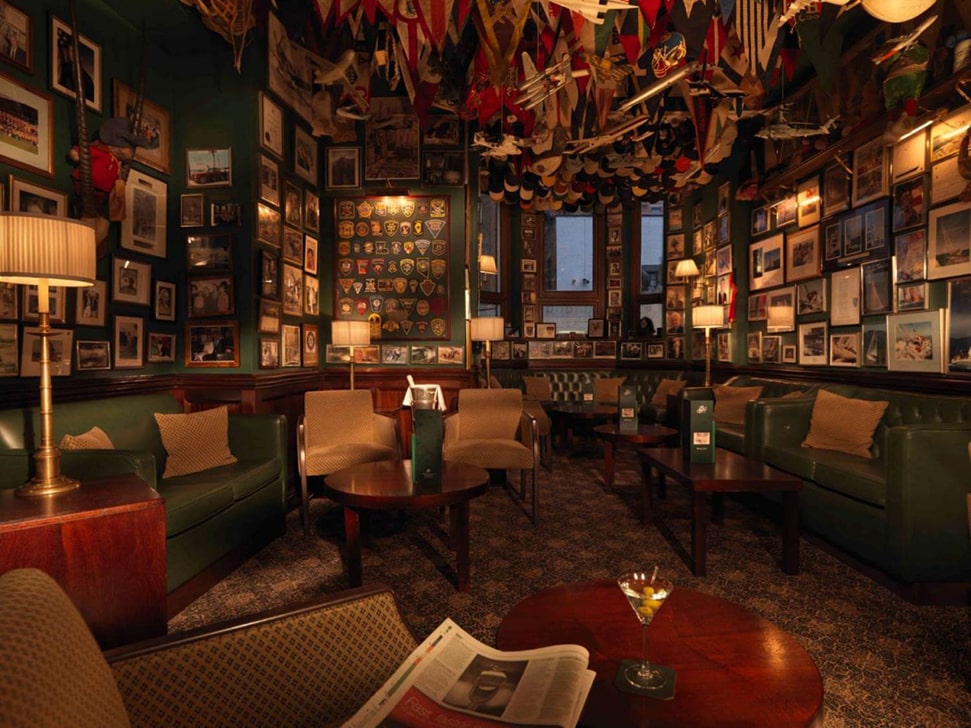 The American Bar is the oldest surviving cocktail bar in Britain, having first welcomed guests in 1893. Today it remains one of the most acclaimed bars on the planet, regularly winning awards and even being voted as the World’s Best Bar. It’s renowned for its unrivalled atmosphere and innovative cocktails, which are beautifully presented in a menu made up to look like a songbook, designed to pay homage to the famous musicians and songwriters that have entrained guests in the bar for decades. Each cocktail was inspired by a song played in the bar, from I Love You, taken from the Nancy and Frank Sinatra duet Somethin’ Stupid, to Electric Lover, a riff on Prince’s Purple Rain – which features glitter as one of its key ingredients. As if that wasn’t enough, the menu is brought to life every night by the bar’s long-time resident pianist, Jon Nickoll. 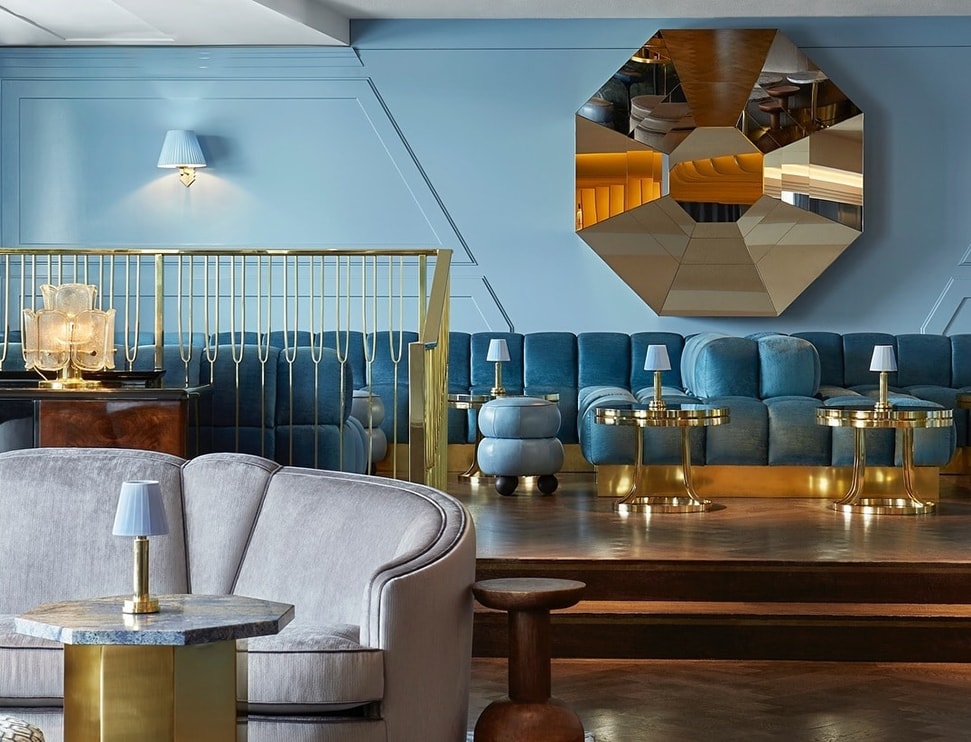 After topping the list of World’s Best Bars last year, the esteemed Dandelyan on the South Bank closed its doors and in its place has opened Lyaness, the latest offering from cocktail wunderkind Ryan Chetiyawardana – aka Mr Lyan. And, to everyone’s enormous relief, it is even better than Dandelyan. Just as elegant as its predecessor, with the same sweeping views over the river, the bar is decked out in smart powder blue, with intimate velvet booths and gold accents. In terms of the menu, the team has designed the cocktails around ingredients rather than specific types, taking what they refer to as a ‘cook’s approach to flavour’. Expect unusual pairings like vegan honey mixed with Johnnie Walker Black, fresh date and galangal, and deconstructed pineapple muddled with Martini Bitter and white and pink radicchio. The cocktails might sound mad, but you know you’re in safe hands here.