Plus, an inside look at the capital’s latest female-only members' club 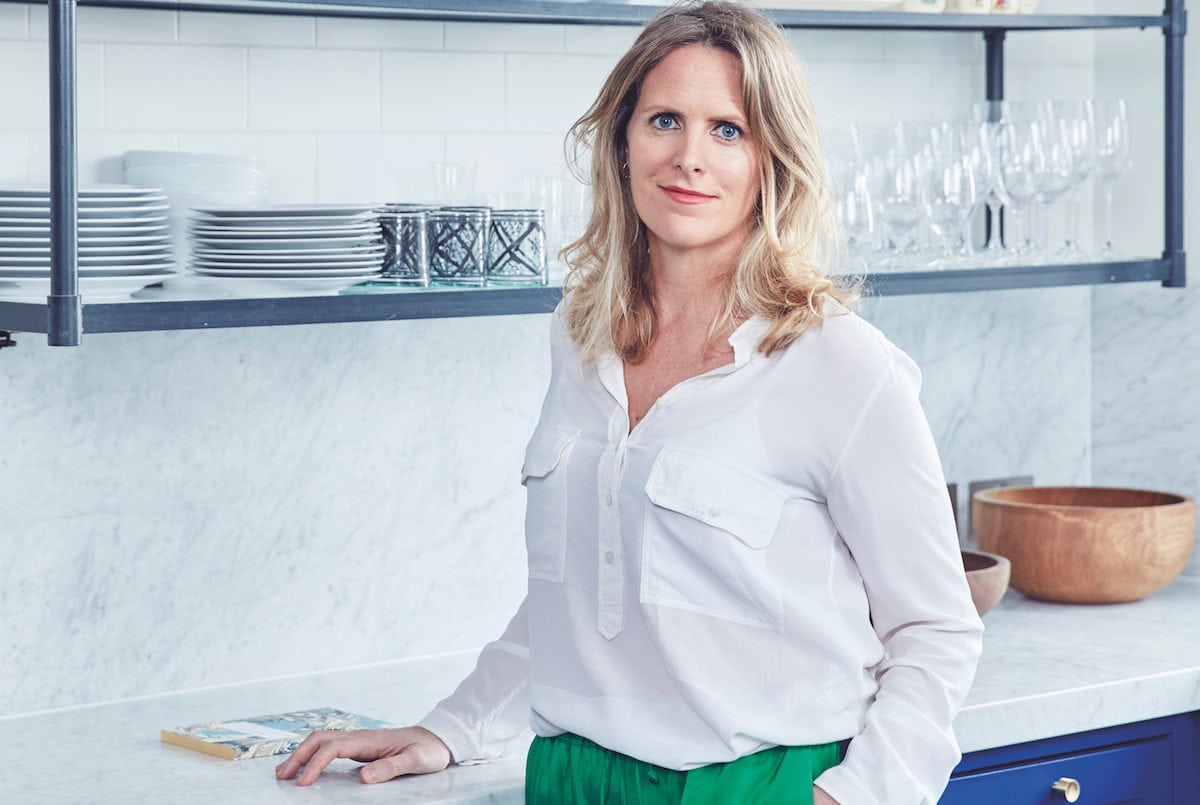 Heralded as one of Britain’s brightest tastemakers, Suzy Hoodless is the name to know for truly inspired interiors. Here, she talks about challenging clients, cultivating colour and creating the new AllBright club in Mayfair.

London-based interior designer Suzy Hoodless is on a roll. Fresh from completing a show apartment at the high-profile Television Centre in west London last year, this May saw the opening of The AllBright in Mayfair, the glamorous interiors of which were also designed by Hoodless and her six-strong team. This vast, five-storey townhouse is the second outpost of the women-only members’ club by entrepreneur Debbie Wosskow, OBE and former Hearst CEO Anna Jones.

But while it might feel as if she’s just now hitting her stride, Hoodless has been busy successfully doing her thing for the past 19 years. “It’s just a very slow and gradual process building it up,” she says, stirring her hot chocolate. “It’s about dealing with people and very meticulous clients and suppliers, many of whom are craftspeople and creative. So I’m just bringing that together to create highly practical spaces that are comfortable, but also look good.”

Since I first met Hoodless in the early 00s, a lot has happened. Working out of west London – her studio is in Clarendon Cross – Hoodless is now married and mother to three children: Misty, eight, Myla, six, and Arki, four. The London home they share has been featured in House & Garden, with Hoodless regularly appearing in its prestigious annual Top 100 Interior Designers list. Chez Hoodless is full of colour, patterned textiles, rugs, and 20th century and contemporary design classics. Although her eclectic aesthetic has been fine-tuned over the years, many pieces she had in those early days remain – a set of Hans Wegner “Wishbone” chairs in the kitchen, for example, as well as a pink-and-white Barber & Osgerby Quodes “Satellite” cabinet in her daughters’ bedroom.

Heralded as “Britain’s brightest tastemaker” by Harper’s Bazaar, Hoodless is today known in affluent London circles and among a cosmopolitan, design-savvy set as the name synonymous with beautiful interiors. But carving out a niche in the residential realm is no mean feat when it involves satisfying private clients. Many successful interior designers who work across the board, from hospitality to retail, will tell you how exhausting and tiresome it can be dealing with those exacting and demanding characters from the top 0.1 per cent of the population.

Yet when it comes to Hoodless, you get the feeling that the unflappable designer was born to do this. She actually prefers residential projects, saying that the trick is simply “to be really organised”, never leaving anything to chance because “it will always go wrong”. When we meet, she has come straight from an appointment with a client at Albany, the ultra-exclusive Georgian apartment block in Piccadilly. “We’re working with [bespoke furniture-maker] Rupert Bevan on creating this highly engineered, industrial kitchen inspired by the Maison de Verre,” she says of the project, one of 12 she currently has on the go. “The client is in finance and is very meticulous. I love working with him, but you have to be absolutely on your game,” she adds.

This regimental approach to organisation is of her own making; Hoodless was never formally trained. “I have brilliant systems, completely made up by me, and they’re watertight,” she explains. The first to admit that success is always partly down to good luck, Hoodless was, however, clearly determined to “get on with life” from the outset, dropping out of a history of design course at the University of Manchester after a mere six weeks. “I didn’t want to spend three years penniless, learning something I wasn’t sure I was interested in learning,” she says, matter-of-factly. “Everyone was going out and getting drunk and I’d been away at school already for seven years.”

She left and took a typing and shorthand course instead – “a life skill everyone should learn” – and consequently landed a gig assisting the creative team at Designers Guild, which gave her a taste of the interior design world: “I was showing the collections to the press, such as The World of Interiors, and I thought, ‘I’d really like to be on that side of things.’” A stint at Condé Nast followed. Then a lucky break beckoned in the form of Tyler Brûlé, whom a friend suggested she meet because he was setting up a new magazine. It was Wallpaper*. Hoodless became part of the tiny original team (which included Paul de Zwart, founder of Another Country furniture, a favourite brand Hoodless specifies today), and embarked on a five-year adventure of touring industry trade fairs and styling houses for shoots across the globe.

Equipped with this interior design apprenticeship of sorts, she eventually left because – yet again – she was missing the real world, or, as she describes it, “the practical element”. Freelance styling and art direction followed. Her first house project was for someone she’d met at Wallpaper*. “It was all B&B Italia and very neutral, in beiges and taupes, which was the late-90s aesthetic,” she recalls. “I couldn’t handle colour then at all.” That would soon change. While Hoodless still uses a mixture of vintage and design classics, if there is one thing that characterises the “Suzy Hoodless stamp” today it’s a joyful embracing of colour and pattern. Take her own lively London home, for example. As well as a kitchen filled with Yves Klein blue cabinetry, the living room is bedecked with pale blue custom-designed shelving, a vivid yellow architrave and vintage armchairs picked up on Golborne Road and upholstered in bright geometric Pierre Frey fabric to juxtapose perfectly with a petrol-blue velvet George Smith sofa.

Describing herself as a magpie, who picks and chooses, Hoodless says: “I’m probably not a very conceptual designer. I’m excited and driven by good design provenance [that] transcends periods and styles. Most clients ask for a comfortable family home, so I want the fiercely practical side – it has to work. The homes should celebrate clients’ personalities. It’s often a real mix.” Case in point: the BBC Television Centre development. “The BBC heritage is totally unique to the site and is to be celebrated,” explains Suzy. “My vision was to take the best of what is already there and to rework it for today.” While it may be a high-profile project, it was also one that was close to Suzy’s heart. “I was born in west London and my memories of the BBC go back to early childhood, so I have great affection and nostalgia for it,” she says.

What anchors this organic, multifarious approach is often the architecture. Hoodless is a firm believer in restoring original details wherever possible to lend depth and character: “We always want to put houses back with their hard finishes – restoring the fireplaces, skirting, cornicing – then you have good bones and structure.” In this respect The AllBright was a dream project for her. The first request from co-founders Wosskow and Jones was that she restore the townhouse feel of the property, which was formerly inhabited by Bloomsbury Auctions. Ceiling roses, panelling and cornices were all recreated by Hoodless. Beyond that, she was asked to create interiors that were “contemporary and feminine (but not ‘pretty’), comfortable and with lots of different and flexible areas able to accommodate events, co-working and socialising”.

Members now enjoy a glamorous club, replete with reflective surfaces such as brass lighting, foxed mirrored wall panelling and ceilings of dark gloss paint, combined with beautifully tailored fabrics that take their cues from nearby Savile Row. In the entrance lobby, Hoodless has embellished what is a narrow awkward space by lining the walls and ceiling in smoky tinted mirror. From there, guests climb a monochrome houndstooth-carpeted staircase up to the first-floor restaurant and bar. A palette of pale blues and punchy greens dominate in here, softened by walls plastered to appear like folds of fabric. Clean and contemporary, Thonet chairs are paired with terrazzo-topped tables, with the odd Rosewood vintage sideboard or 50s coffee table thrown in to add character.

Like the new Annabel’s by Martin Brudnizki, the powder room at The AllBright is destined to be quite the hangout. “They wanted it to be very Instagrammable,” says Hoodless, “which is slightly terrifying but what’s fun is it’s not a home so we can be totally uncompromising.” Cue feeds filled with selfie-flattering mosaic pink floors and gold walls. Meanwhile, the sensuous blue brushstrokes of giant palm leaves by French artist Raoul Dufy, in the form of Mille Feuille wallpaper by Christopher Farr, provide a calming backdrop to the second-floor beauty and wellness zone. On the third floor, a vibrant Ikat pattern (Taraz by Pierre Frey) combined with bright geometric tiles and dark glossy blue ceilings livens up the co-working and events space. Huge communal oak tables from Another Country provide work surfaces, with seating provided by DSW Eames chairs and Danish brand GUBI.

The fourth-floor lounge bar is anchored by a huge yellow-gold mirrored bar with a pink leather-clad front, with mohair velvet seating in a pretty palette of pale green and pink. This leads out onto a large terrace, furnished with curvaceous wicker furniture from Sika Design and enclosed by leafy palms and ivy-clad trellis. Crowning the club is the conservatory-style fifth floor, a lofty room that benefits from a lantern skylight that floods the interior with natural light, and a secluded terrace that looks out over the Mayfair skyline – a fitting view for this year’s hottest addition to the private member’s club scene.