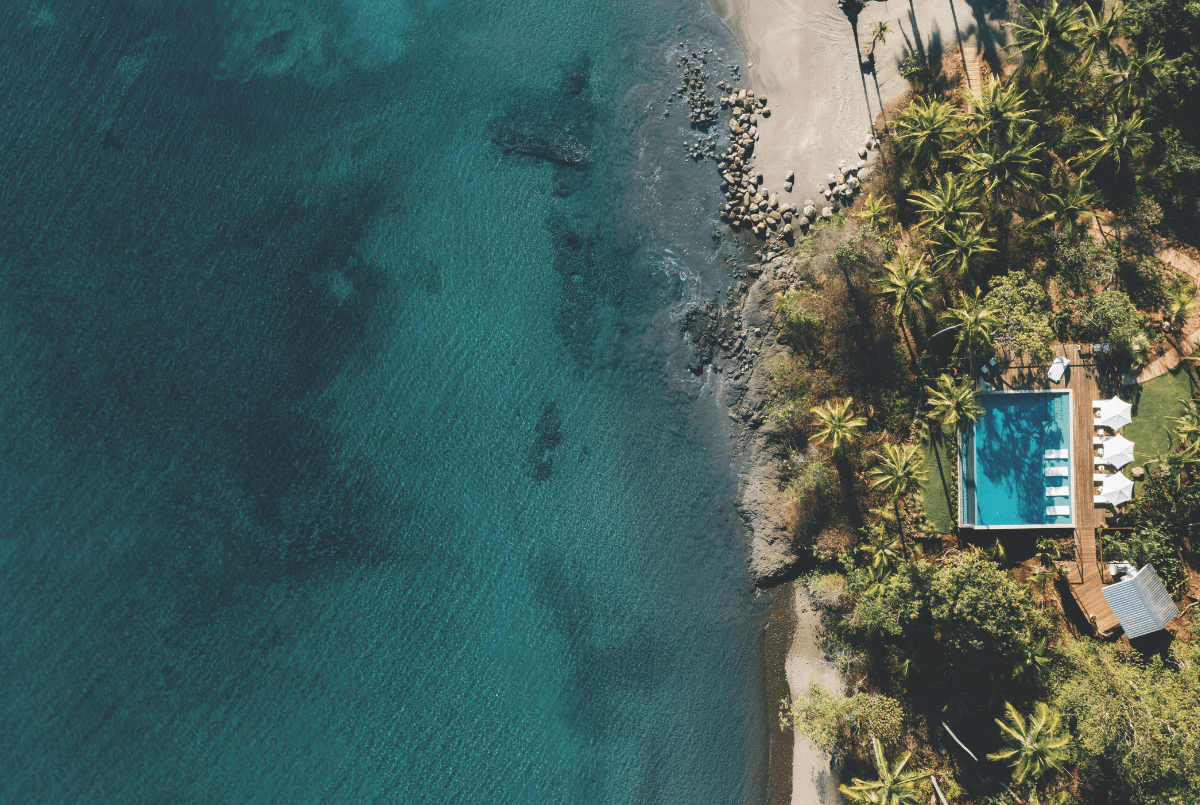 The most enchanting treasure island hotel hideaways to discover

Leave the crowds behind with a secluded retreat

From a far-flung archipelago off Panama to the Mediterranean’s best-kept secret, these enchanting island hotels offer a refined castaway experience. When you want to switch off – really switch off – there’s nothing worse than having to share the beach with hordes of holidaymakers, or being forced to queue for a table at the smartest local restaurant. Which is precisely why these lesser-known islands, free from the usual tourist hustle and bustle, are so idyllic. Discover the secret hideaways to book for an escape to paradise.

It’s no coincidence that the Gulf of Chiriquí – a stretch of Panama’s Pacific shoreline – is also referred to as “the lost coast”. For this is an area that’s as wild, unspoiled and unsullied by tourism as it is pristine and paradisiacal. Even less of a coincidence that it is home to Islas Secas, a luxury resort set on a private 14-island archipelago, which has a sense of discovery and adventure at its core. Located 20 miles off the coast of Panama, this hideaway is accessible either by one-hour boat journey or via the resort’s very own seaplane, befitting the most intrepid of explorers.

Set amid lush rainforest and coconut groves, four casita sites sleep up to 18 guests (nine villas in total, all floor-to-ceiling cherry-wood shutters, louvred doors and tastefully neutral furnishings). Each site offers a plunge pool, thatched roof cabana and sprawling outdoor deck from which to soak up the seemingly endless ocean views, with nothing but the sound of the sea to rouse you from your reverie, save, perhaps, the occasional emerald hummingbird busily gathering nectar.

You’ll be captivated, yes, but you won’t want to stay sedentary for long. With such an extraordinary ocean wilderness on its doorstep, Islas Secas (or “dry islands”, referring to the area’s low tides) is the jumping-off point from which to undertake any number of once-in-a-lifetime aquatic adventures. There’s swimming and paddle-boarding in the calm, warm waters that lap the palm-fringed isles; snorkelling in Coiba National Park, a UNESCO World Heritage Site, which teems with giant manta and eagle rays, dolphins, leatherback turtles, over 750 species of tropical fish, and coral reefs; superlative catch-and-release tuna and marlin fishing; and seasonal humpback whale watching. In addition, a field station is currently being built, at which guests will be able to quiz visiting researchers and scientists. Fittingly, with so much on offer, there’s even a dedicated ‘adventure concierge’ to help you make the most of your surroundings.

Sun-kissed guests can kick back at the end of the day in Terraza, an open-air communal setting offering ocean-to-fork dining with local flair. Think grilled, straight-from-the-sea lobster, barbecued red snapper and fresh scallops, all served alongside produce from the resort’s gardens, including bananas, mangos, pineapples and cashews. Champagne-fuelled picnics and sunset beach BBQs can also be arranged. Finish off with a nightcap in the seductive Hemingway-inspired bar, with its wooden panelling and colonial-style displays of historic maps and local artwork.

As you’d expect, the resort has an eco-conscience: it is fully solar-powered, recycles all its food waste and water for irrigation, and 75 per cent of the archipelago has been left untouched, ensuring the unique ocean retreat is safeguarded for generations to come. For a sustainable, barefoot-luxury-meets-adventure holiday, this place can do no wrong.

Due to open in December 2019, but taking bookings now. From $,2000 (£1,658) per person, per night, including all meals and drinks, activities, spa treatments, transfers and one private island getaway day.
islassecas.com

The Datai Langkawi perches majestically on the tip of Langkawi, the largest island in a 99-island archipelago on Malaysia’s west coast. Nestled in a 10-million-year-old rainforest, overlooking the dreamy Datai Bay and with a backdrop of the majestic Gunung Mat Cincang, this laid-back luxe hotel certainly has location on its side. Now, thanks to a $60million (£48m) refresh, guests can fully immerse themselves in this natural wonderland, where flying lemurs (aka colugos) glide from tree to tree, families of dusky leaf monkeys play among the branches and water monitor lizards slowly go about their day.

The resort’s well-thought-through design maintains a deep connection with its environment. The 121 rooms, suites and villas all look out over tropical rainforest, some with views of the Andaman Sea and Tarutao Island beyond. For a true ‘at one with nature’ experience, book a Rainforest Collection villa, which stands on wooden stilts, surrounded by the dense vegetation. Also elevated is The Pavilion, a signature Thai restaurant best appreciated as dusk falls and the air is alive with jungle chatter (it is perfect colugo-spotting territory); for Malaysian flavours, The Gulai House is set in a traditional kampung-style house where guests are welcome to sit on the floor for their feast; while the Beach Club and Bar is all about fresh seafood and cocktails, savoured to the soundtrack of gently lapping waves. Even the spa, which focuses on the healing properties of plants and age-old Malay traditions, is situated along a small stream, surrounded by the sounds and subtle aromas of the rainforest.

For the active, the recently added Rimba Trail runs through the coastal forest to an 18m-high canopy walk (the first of its kind in a five-star hotel), affording rainforest vistas as far as the eye can see. Keen ornithologists will want to bring binoculars to spot the brightly hued orange-breasted trogon, collared kingfisher and peregrine falcon. Though, of course, if you prefer to appreciate nature from the squishy comfort of a sunlounger on the white sand beach or by the pool, the Datai Langkawi can comply. 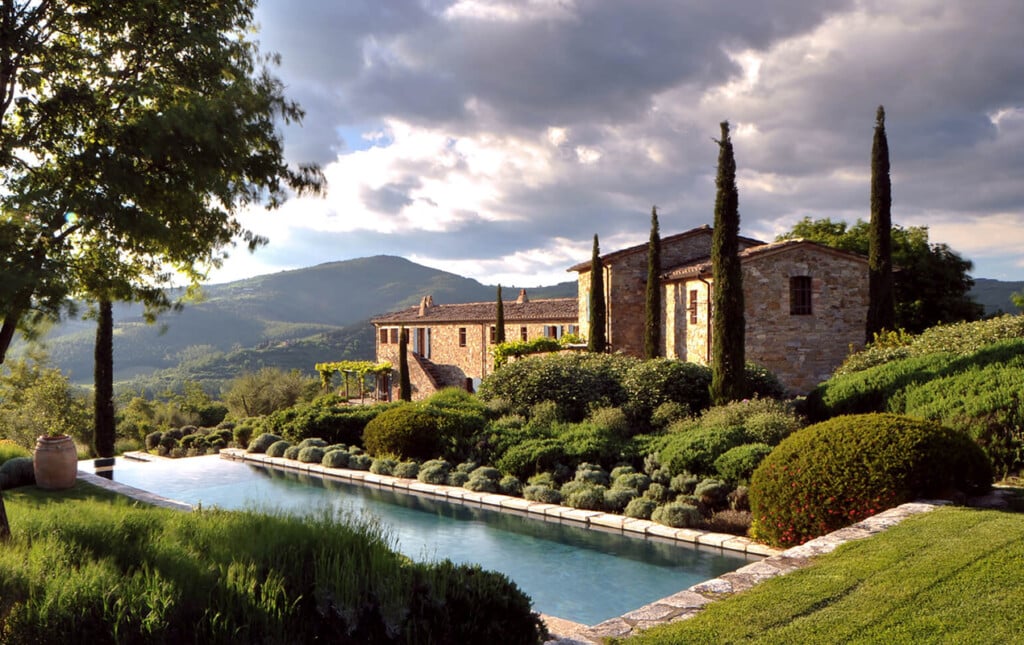 Sitting on the game-rich Chief’s Island, slap-bang in the middle of the Okavango Delta, you’ll find Mombo Camp and Little Mombo. Fresh from an overhaul, Wilderness Safaris’ flagship safari camp and its little sister have been completely reimagined. Retaining all of their authentic bush-camp experience, they have also become the very definition of sustainable luxury.

At Mombo Camp, nine spacious tents afford sweeping views of the floodplains, each with a now-slightly-larger private deck and plunge pool from which to spot the herds of herbivores (and their predators) that roam freely below. Each tent comes with a sitting room, separate bedroom and bathroom, indoor and outdoor showers, and bathtub.

On the other side of the island and accessible via a raised boardwalk, Little Mombo is a smaller, more intimate version, with just three tents tucked away under a canopy of jackalberry and sausage trees. Both have a dining area (the menu includes traditional Botswana fare), boma, kitchen, lounge and infinity lap pool, ideal for combining breaststroke with unbeatable bush views.

But it’s the wildlife you’re here to see: long known as the ‘Place of Plenty’, Mombo is set within the Moremi Game Reserve, widely considered one of the best places for game-viewing in Africa. From lions, cheetahs and leopards to huge herds of buffalo, elephant, giraffe, blue wildebeest and zebra… all abound. If you’re lucky, you might even glimpse that most magnificent of beasts, the rhino.

A light eco footprint manifests itself in the huge conservation effort underway here – and Mombo has played a key role in rhino relocation, reintroducing black and white rhino into the Delta. There’s ample opportunity for guests to learn about the rhino’s return to the wild, as well as the other ongoing biodiversity protection projects, both in the camp and on game drives.

Sharing the day’s stories as dusk falls, over ice-cold gin and tonics, with only the sounds of the African bush around you… it’s a moment you’ll never forget.

From $2,335 (£1,855) per person, per night based on two people sharing, including accommodation, meals, twice daily scheduled camp activities, park fees and all local drinks.
wilderness-safaris.com

Formentera is often referred to as the Mediterranean’s “best-kept secret”. Unlike its larger, glitzier Balearic neighbours, you won’t find any superclubs or mega-hotels here. The vibe on this – 22 km-long and, at its thin central section, two km-wide – island is laid-back, hippy-chic, with a serious undercurrent of luxe.

Time stands still here: days are spent exploring pretty, pink-sand coves and swimming in the warm, crystalline waters, punctuated only by lingering, rosé-fuelled lunches served by barefoot waiters. Etosoto Formentera – the first eco-friendly hotel from Parisian brothers Julien and Grégory Labrousse (their other hotel is in Portugal) – is very much in keeping with the island feel; less of a hotel and more of a wellbeing retreat, it is aimed towards a free-spirited, creative crowd. Indeed, its name sums it up: Eto is an acronym of ‘Earth to Orbit’, which stands for the idea of a place away from all constraints, and Soto a current school of Japanese Zen Buddhist thought.

You’ll find it to the east of the island, where a rocky, pine-tree-flanked road brings you to a collection of beautifully restored fincas, surrounded by olive and fig trees, vineyards and rolling fields of wheat, with sweeping sea views. A large patio and shaded terrace area are ideal cocktail-sipping territory, while inside its all whitewashed walls, rattan furniture and covetable rugs.Each of the ten rooms and suites is unique; for extra privacy opt for one of the two smaller fincas, where you can fall asleep to the rhythmic melody of the gently lapping waves. The beach is just steps away though there’s a host of activities on offer – after all, new and enriching learning is the raison d’être of Etosoto. Choose from organic gardening, slow-food workshops, kundalini yoga and naturopathy, among others. For children, the Super 8 Club gives them an opportunity to find out about film-making.

All that learning making you hungry? The restaurant’s USP is simple, nourishing meals – think plant-based milk and homemade granola for breakfast – with many of the ingredients grown on the estate. If you’re looking to disconnect for a few days then this is the place to do it.

A six-day yoga break, including accommodation, yoga and food, costs from €750 (£667) per person.
etosoto.com