The unstoppable Cynthia Erivo tells us about fame, family and female solidarity

By the age of 33, London-born multi-hyphenate Cynthia Erivo has already won an Emmy, Grammy and a Tony, and been nominated twice for an Oscar. And yet, despite her meteoric rise on Broadway and in Hollywood, she remains relatively unknown in the UK. All this looks set to change, however, with big-budget projects for Netflix and Disney in the pipeline and the launch of her critically-acclaimed solo album Ch.1 Vs.1, and her first children’s book Remember To Dream, Ebere. Here, Cynthia Erivo talks to us about the lack of diversity on our shores, the sisterhood and why she’s chosen to bare her soul through her music. 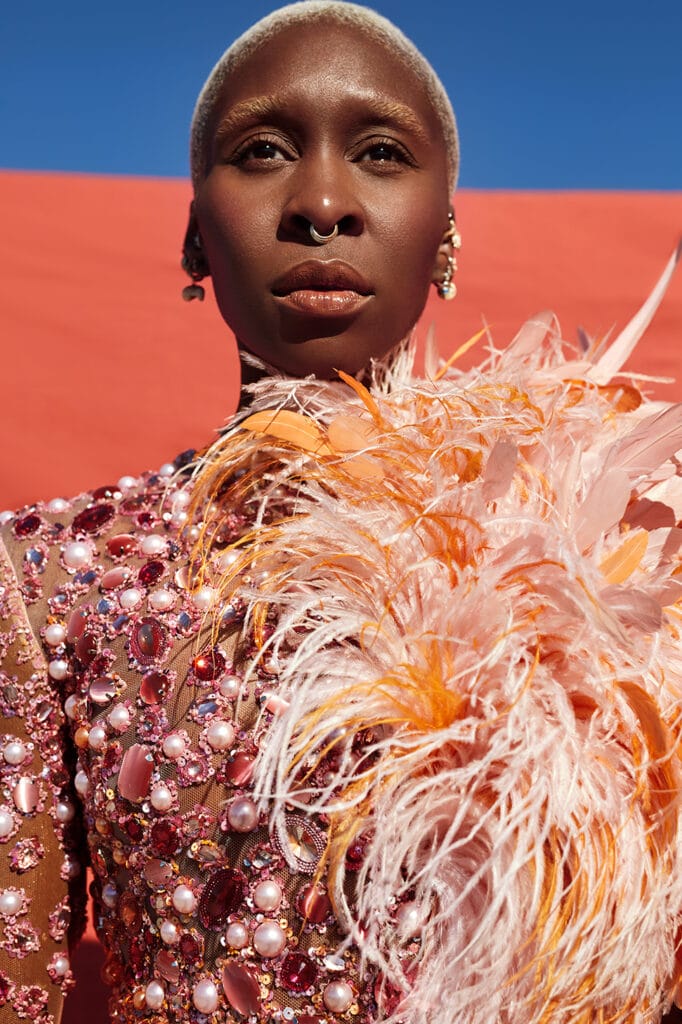 Already dubbed “entertainment’s top overachiever”, Cynthia Erivo’s road to the top has been impressive to say the least. In 2015, the multi-hyphenate Londoner took Broadway by storm with her stellar stint as Celie in the musical of The Color Purple – a performance that won her a Tony Award. In 2020, she earned an Academy Award nomination for playing American abolitionist Harriet Tubman in the biopic Harriet, a trophy that would have complemented her existing Tony, Emmy and Grammy gongs, and seen her join the hallowed EGOT elite – all by the age of 33.

She may not have walked away with an Academy Award that year, but Erivo stole the show with her powerful performance of the original song she co-wrote for the film, Stand Up (for which she also received an Oscar nomination). Music has remained integral to Erivo’s work and she recently played her idol Aretha Franklin in Genius: Aretha, a National Geographic series chronicling the life of the Queen of Soul; a role for which she has been widely lauded, and for which she received another Emmy nomination.

All this and yet, despite such phenomenal success Stateside, Erivo has remained inexplicably under the radar on these shores. Though this looks set to change with a raft of new projects, including the launch of her debut solo album Ch. 1 Vs. 1, a 12-track blend of classic soul, powerful pop hooks and R&B melodies electrified by her mighty vocals. “I’d wanted to do an album for a while, I just hadn’t been given the chance to do so until now,” she tells me, calling from New York City, where she is currently on a promotional tour. “Now felt like a good time, just because of all the things that I’ve experienced so far.”

Born and raised in Stockwell, south London, Erivo grew up with her mother Edith – a nurse who came to Britain from Nigeria at the age of 24 – and her younger sister Stephanie, both of whom she shares a tight-knit bond with. It’s widely chronicled that Erivo’s mother had a sixth sense that her daughter would become an actress and a singer, recording it in Erivo’s baby book when she was just 18 months old. Indeed, after attending La Retraite Roman Catholic Girls’ School, her eldest daughter dropped out of a music psychology degree at the University of East London to train at RADA. 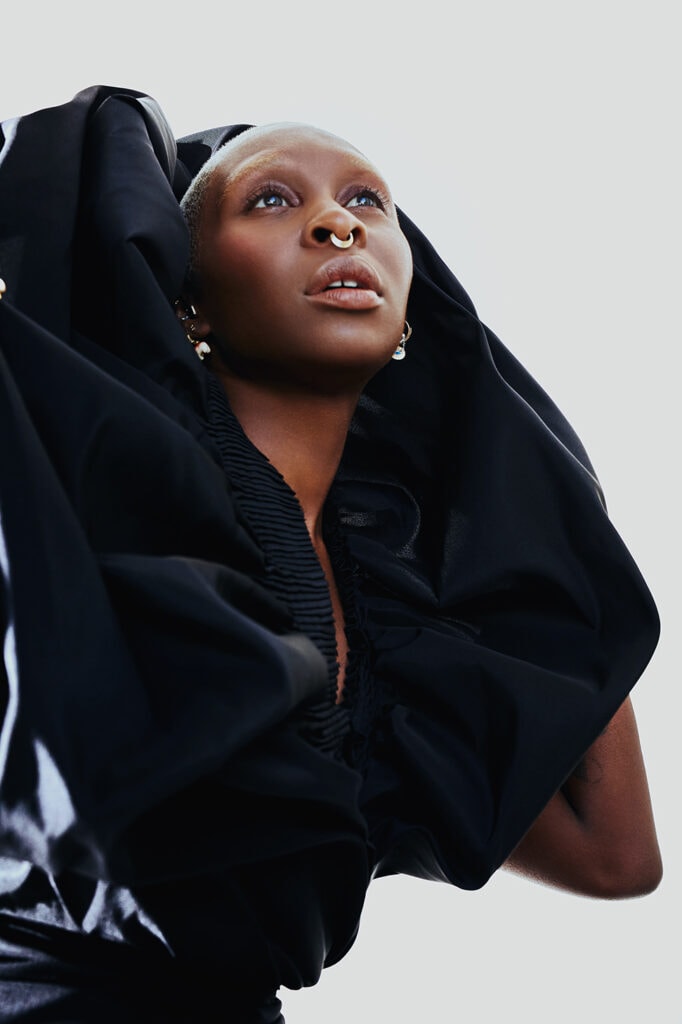 When she was 16, Erivo and her sister were disowned by their father, who told them he wanted nothing more to do with them as they stood in the middle of a London tube station. The last time she saw him was a decade ago at a cousin’s wedding. She details their non-existent relationship on the album’s track You’re Not Here, a ballad she wrote to help her move on from the pain of his abandonment.

“Being vulnerable is how I function,” she admits, when I ask how comfortable she felt sharing such a personal story with the world. “I don’t know if I could have written anything that wasn’t honest. I want people to know that it is OK to talk about those things. I want them to find solace and comfort in my music. The goal has only ever been to be truthful.”

“I don't know if I could have written anything that wasn’t honest. I want people to know that it is OK to talk about those things. I want them to find solace and comfort in my music. The goal has only ever been to be truthful.”

Apropos living your truth, while Erivo has never felt a need to ‘come out’ as such, she identifies as Queer – a part of her identity that is illustrated beautifully in the visuals for her lead single, The Good. It tells the story of two young Black women’s romantic relationship, replacing fetishisation and stereotypes about what this type of love looks like, with its true, tender reality. The story isn’t necessarily autobiographical, according to Erivo, but it’s a moving ode to the Black Queer visibility we so often lack in mainstream spaces.

Another gap Erivo is filling is the display of sisterly solidarity in show business. “Sisterhood is extremely important, and I don’t know that we get to see it in this industry that often,” says Erivo. Last month, a moment between her and fellow British megastar Michaela Coel went viral on social media. It was a clip from the 2021 Emmys, where Erivo showed up for her long-term friend (the two starred in Coel’s 2015 drama Chewing Gum together, which was one of Erivo’s first roles on TV) by acting as a crutch for her through the joyous yet overwhelming moment she made history as the first Black woman to win the Writing for a Limited Series category for her critically acclaimed drama I May Destroy You.

She hopes that public displays of genuine empowerment between women will set a new precedent for generations to come. “It’s crucial to let other artists know that just being there for each other in this business is possible without feeling like you’re in competition.”

Both Erivo and Coel are among a long list of Black British actors who have found success in the US after years of dead-end auditions and minimal opportunities in the UK. It’s no secret that the British film and TV industries fall far behind their counterparts across the pond when it comes to inclusive storytelling and representation for people of colour. It’s an issue that prompted Erivo’s move to the States in 2015, and she currently lives in Los Angeles. “Things have gotten better in the UK but we’re still very behind. I think those two things can be true at the same time,” she explains. “We’re still not in a place where we’re giving substantial roles to Black actors or Black performers in the UK, and the roles we are offered auditions for are never the lead or the centre, they’re not even number two unfortunately. Yet still, we’re having to work significantly harder to even get those. Ultimately, you go where the work is and where your craft is appreciated and unfortunately the UK fails on that front.”

Her points are valid and made abundantly clear by the influx of Black British actors who have shared similar experiences of being undervalued in their own country. So, how does this change? “It’s tough,” Erivo admits. “It starts with casting and programming. It’s about finding stories that are multicultural and can allow different people to play the roles.”

“It’s crucial to let other artists know that just being there for each other in this business is possible without feeling like you’re in competition.”

While diversity within the film and TV industry in the UK may be lacking, Erivo has been busy snapping up some of the biggest gigs in Hollywood. “When choosing roles, I look for people I’ve never met before. I’m always searching for a person that I’m interested in because if they intrigue me in some way, I want to get to know them. I’m often trying to look for women and faces that we just haven’t seen before that are in grey areas or have complicated lives and personalities. That’s my criteria.”

“I’m proud of all the roles I’ve played because they take a lot of work,” she continues. “Playing Harriet was physically and mentally challenging, and Aretha was vocally challenging, just learning the music and all of her nuances. I was consistently studying her.” Though the idea of Aretha Franklin herself being a fan of her work (the two met when the late legend once came to see Erivo on Broadway) was always a comfort. “All of my roles have pulled out different parts of me, which I love – that’s really what I look for in my jobs.” 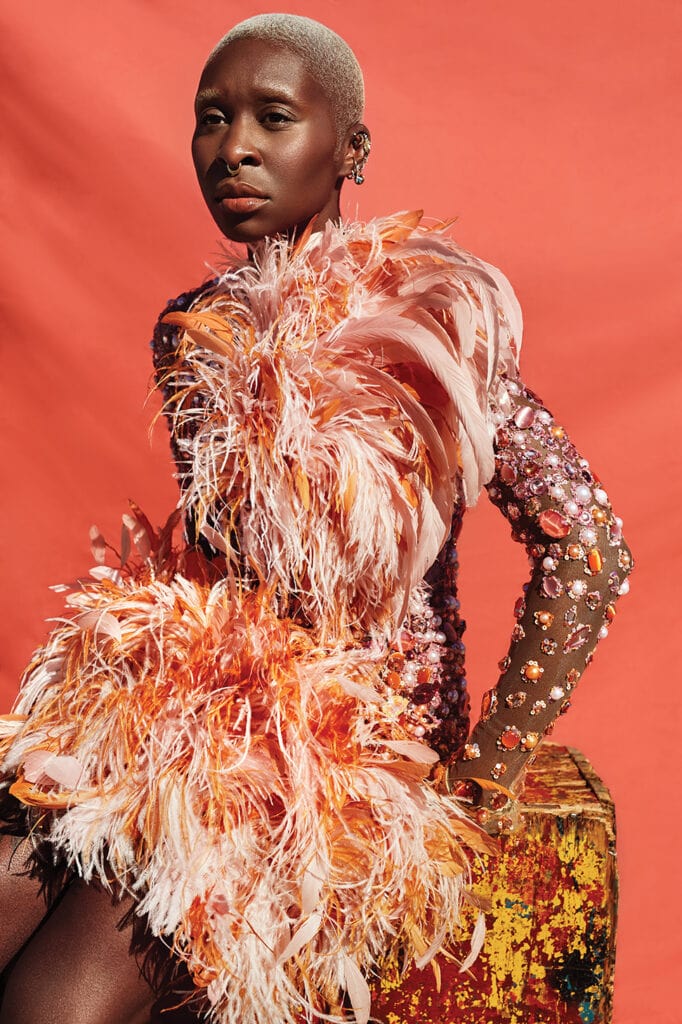 It should perhaps come as no surprise that Erivo is equally as venturous in her sartorial leanings. The diminutive star (she’s 5ft 1) and her stylist Jason Bolden are red carpet risk takers, serving the kind of idiosyncratic looks that have yet to be missed off a Best Dressed list, with designers falling over themselves to dress her. There was the fluorescent green Valentino couture at this year’s Golden Globes, and the stunning hand-cut macramé lace Vera Wang gown at the Critics’ Choice Awards, not to mention the futuristic metallic Louis Vuitton number for the Grammys, and the white custom Versace gown at the Oscars – all of which have been complemented by Erivo’s trademark septum piercing, gorgeously stacked earrings and signature buzzcut. “Erivo is a fashion girl through and through. I show up, and she’s already in a full look,” Bolden has said of his client.

“I love what I have managed to build for myself because it’s not just things, but I have filled it with people that I love deeply”

With a debut album ticked off her to-do list, and a string of award-winning roles already under her belt, what could possibly be next for Erivo? The short answer is: a lot. Last year she set up her own production company Edith’s Daughter – “to focus on projects that express the beauty in the stories and people who are often overlooked and underrepresented” – and has a number of projects in the pipeline.

She’s also counting down the days until the release of another debut venture: a children’s book entitled Remember to Dream, Ebere, based on a mother, her daughter and their shared dreams. “It’s out on the 14 October and I’m so excited,” Erivo shares. Not to mention she’s playing the Blue Fairy in Disney’s upcoming live-action remake of Pinocchio, starring in Netflix’s Luther spin-off movie alongside Idris Elba, while squeezing in a top-secret TV series she’s working on. 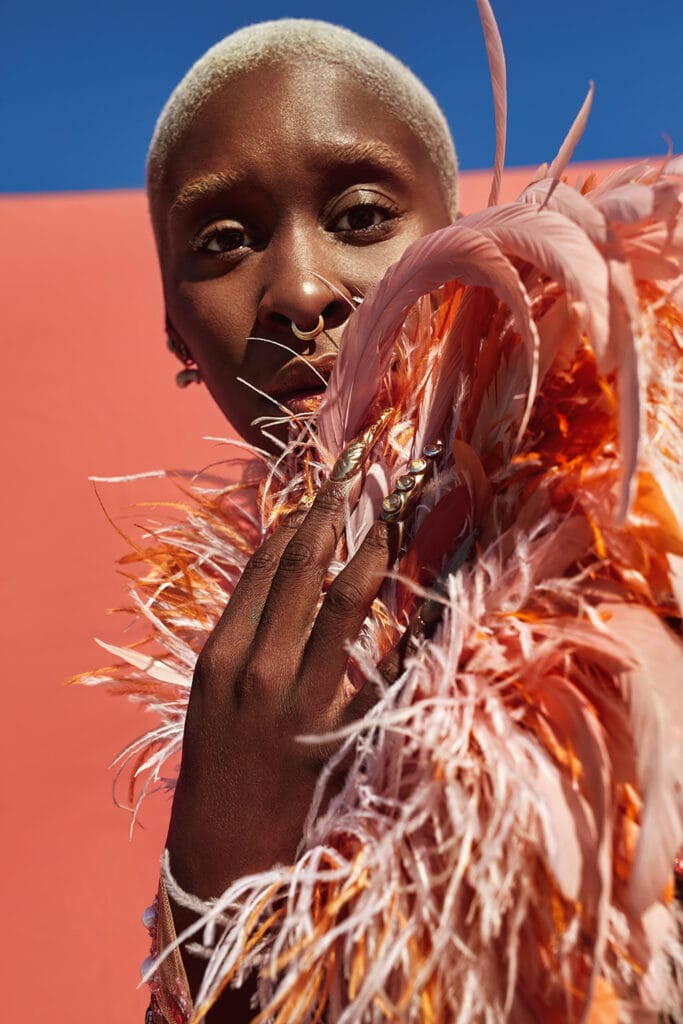 The term ‘hard-working’ suddenly feels like an inadequate adjective to describe Erivo. In fact, it doesn’t even come close. “I love my life,” she tells me, just before rushing off to her next meeting. “I love what I have managed to build for myself because it’s not just things, but I have filled it with people that I love deeply.”

Does she ever miss London? “I miss the people. My mum and my sister are, of course, very proud and my best friend travels with me a lot too. He was just with me in Venice,” she adds, though moving back home is not on the agenda any time soon. “It’s been a real whirlwind for me here and I’m just going with it until it stops making me happy. But right now, I’m really happy and I’m open to whatever the possibilities may be.”

Cynthia Erivo’s debut album Ch. 1 Vs. 1 is out now on Verve Records