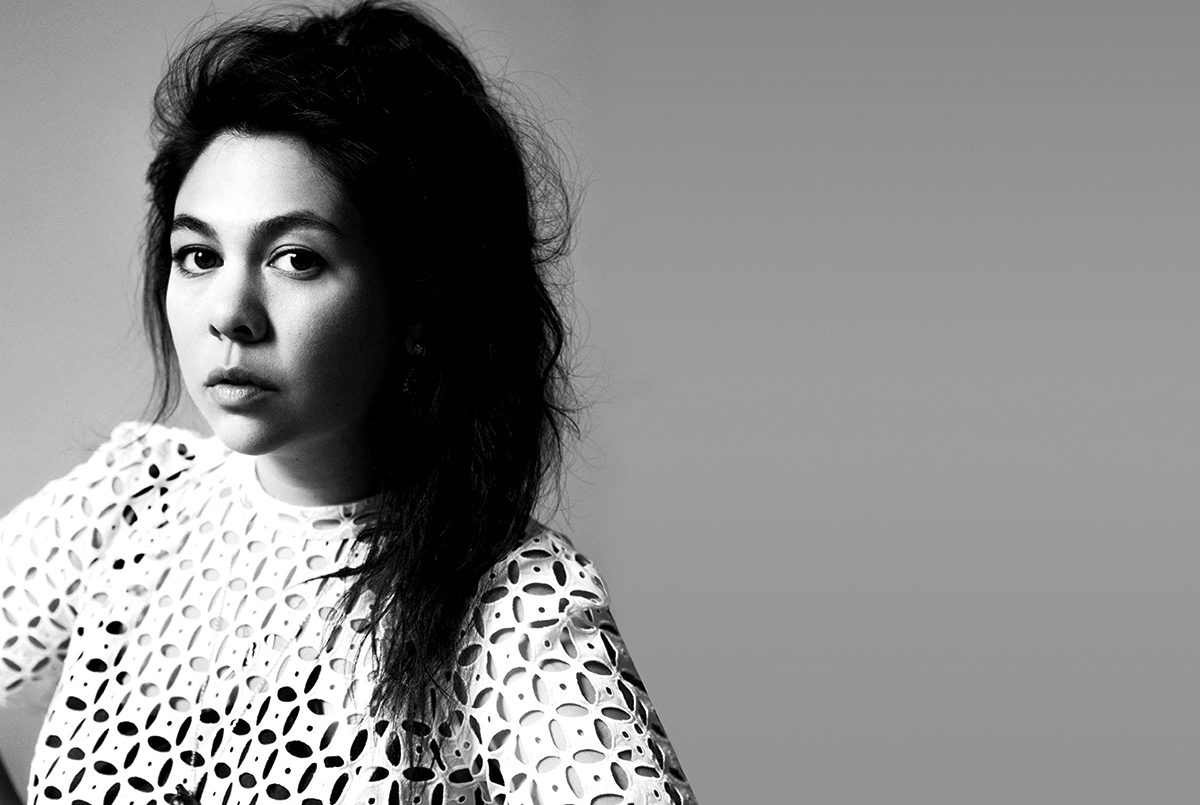 In the archive: Simone Rocha on her fierce and romantic vision for femininity

Inside the world of a sartorial poet

Simone Rocha is a master of contrasts, with designs that meander from sinister to sweet and fragile to fierce. In this spring 2018 profile, she reveals the narrative inspiration that imbues her work.

It’s dusk in the City of London. Light permeates through the stained glass windows of Middle Temple Hall, gently illuminating the vast space that is starting to fall under a blanket of darkness, otherwise dimly lit only by candles. Guests are ushered in from outside to take their seats in the pews under the arched ceilings. Backstage, Simone Rocha is putting the finishing touches to her Spring/Summer 2018 collection; she adjusts a bow, smoothes down a collar. The models are ready, trussed up in pouffy white silks trimmed with pearls. Someone yells time; the show is a go. One by one, the models charge out like deer into the stage lights that have whirred into action.

There’s a moment of calm. “I like this building, it has its own character and history – it helps me to create [a show] that is immersive and atmospheric,” says Rocha of the hall that was officially opened in 1576 by Queen Elizabeth I. Out of all the designers on the London schedule, Rocha is the one renowned for her opulent venues; her shows have previously been staged in Southwark Cathedral, Lancaster House and Goldsmith’s Hall. “I like to work with a building’s existing features… The wooden walls, stained-glass windows and crested chairs here create an intimate environment which contrasts with the naive girlishness of the collection.”

Since founding her label in 2010, the Central Saint Martins graduate has established her own hyper-real version of femininity. Her gauzy chiffon dresses and slightly ‘off’ silhouettes are reworked into new narratives every season. Such is the allure of Rocha’s demure that she was awarded the British Fashion Council’s womenswear designer of the year award in 2016, and her dresses have been worn on the red carpet by Keira Knightley and Kate Bosworth.

This season, Rocha was inspired by memories of childhood. Particularly, a toy shop in her native Dublin called the Doll Hospital – an old-fashioned store where china dolls were displayed in wooden glass-fronted cabinets, and where from the age of five Rocha would go to pick her new playthings. “I always liked that their clothes and their little socks and boots were realistic,” says Rocha. “They weren’t like a Barbie.” Indeed. As a child, Rocha would slide her dolls down the staircase. “They would break because they were china,” she says. “So I would glue them back together again.”

The collection takes its cue from the naivety and fragility of childhood, with dresses reminiscent of Elizabethan nightgowns associated with the traditional nursery. “SS18 was a reaction to my previous autumn/winter collection, which was all about armour and protection,” she says. “I felt drawn to something softer.” Stark white silks and taffetas have been reworked into puffed-sleeve, buttoned-up dresses trimmed with oversized frills, while crisp broderie anglaise cottons with starched collars come with delicate tulle underskirts that gently curl around the ankles.

Sheer lace-trimmed dresses are embroidered with black beaded co-joined paper dolls, like those cut from sheets of folded A4: all of the embroideries and fabrics are developed by Rocha’s in-house team. And such is the undertaking of this task, that Rocha remains one of the rare designers that doesn’t offer pre-collections. All her energy and “emotion” is dedicated to each seasonal show.

“The collection reflects the innocence of being a little girl,” she says. “Girls in pearls playing with paper dolls. The use of black acts as a balance.” Adorned to the heads of each model are countless trinkets and pearls; hair slides and earrings and brooches, reminiscent of children playing dress-up with their mother’s jewellery box – the tinkling tune of which plays out  as the show’s soundtrack. It’s innocent and infantile, and under Rocha’s distinct sartorial handwriting, verges on sinister.

It’s perhaps understandable that Rocha is looking to childhood: the designer and her partner, cinematographer Eoin McLoughlin, became first time parents to a baby daughter, Valentine, in 2015. Since, Rocha has been inspired by pregnancy and motherhood – naturally this is the next chapter in her seasonal story.

Rocha’s studio, situated on the canal in Haggerston, east London (where designers including Peter Pilotto and Roksanda are neighbours), is close to her home, so she doesn’t waste time commuting. “It’s very convenient, and it means all of my spare time can be spent with my family,” she says. “No two days are the same,” she continues, of juggling full-time work with parenting a toddler. Family is of utmost importance to the designer: her mother, Odette, was her business manager until last year; she sits front row at every show with Rocha’s father, the designer John Rocha. Meanwhile, McLoughlin shoots much of her imagery alongside Rocha’s roster of long-time collaborators that includes the photographers Jacob Lillis and Colin Dodgson.

To coincide with each collection, Rocha unveils a new installation in her Mount Street store. Entering the shop is like falling down a Rocha-sized rabbit hole – the bright white space is punctuated with quirky, contemporary design details, including a freestanding changing room and acrylic cubes upon which her pearl-finished brogues and embroidered bags are placed. On the walls hang artworks by Francis Bacon – one of his triptychs was shipped over from the family’s collection in Ireland. Behind the cash register hangs an enormous black and white print by Perry Ogden, from his series ‘Pony Kids’, which documented Irish gypsy boys in Dublin’s Smithfield Market. “I remember Perry shooting this series in Ireland 20 years ago,” she says.

“The collection reflects the innocence of being a little girl – girls in pearls playing with paper dolls. The use of black acts as a balance”

For her Spring/Summer 2018 installation, Rocha created creepy, faceless versions of the dolls, that are dotted on the floor around the dresses and displayed alongside the acrylic furniture. “I worked with a cornicing studio to create hand-moulded plaster sculptures inspired by the doll embroidery motif in the collection,” she says. The campaign imagery was shot by Lillis, depicting girls in frilly nightdresses holding stacks of paper, bound together by string and tufts of red fluff. Another shows Rocha unloading a cardboard box out of a van, while the collection hangs from rails wrapped in a protective plastic covering: Rocha’s fantastical and often eerie narratives are always grounded in some sort of reality. “I find working with collaborators expands the work into new and different paths,” she says.

Eight years down the line, and Rocha is taking the brand in dynamic new directions. The designer is finally finding her feet with her commercialised accessories line that was first introduced in 2015 to coincide with the London store opening. The aforementioned hair clips – which are covered in clusters of pearls and retail from £75 – have completely sold out, and have been touted as the must-have accessory of the season, having been worn by the likes of Alexa Chung. Last year, the brand opened its second store, located on Wooster Street in New York; it sits alongside Céline and Mansur Gavriel. To date, her designs are stocked in Dover Street Market and Browns, as well as 10 Corso Como in Milan, Seoul and Shanghai, and her brand has been profitable since day one – the result of a clever distribution strategy (spearheaded by Rocha’s mother) to build accounts with independent retailers before taking on larger department stores.

Thus far, 2018 has seen Rocha travel to Milan for Moncler’s newly unveiled Genius project, where she was tasked with reinterpreting the brand’s signature down jacket. Naturally, Rocha took inspiration from photographs of Victorian climbers in petticoats, offering goose down garments that were voluminous, feminine and resolutely Rocha – this time rendered all in black.

One thing is clear – Simone Rocha is a sartorial poet. Her world is at once gothic and romantic, fragile yet fierce, sinister yet sweet. Just where will the threads of her narrative take us next? Who knows. But as the show comes to a close, judging by the raucous applause echoing around the hall, it’s sure to be a much-loved tale – one that delves into Simone’s subconscious, and back again.