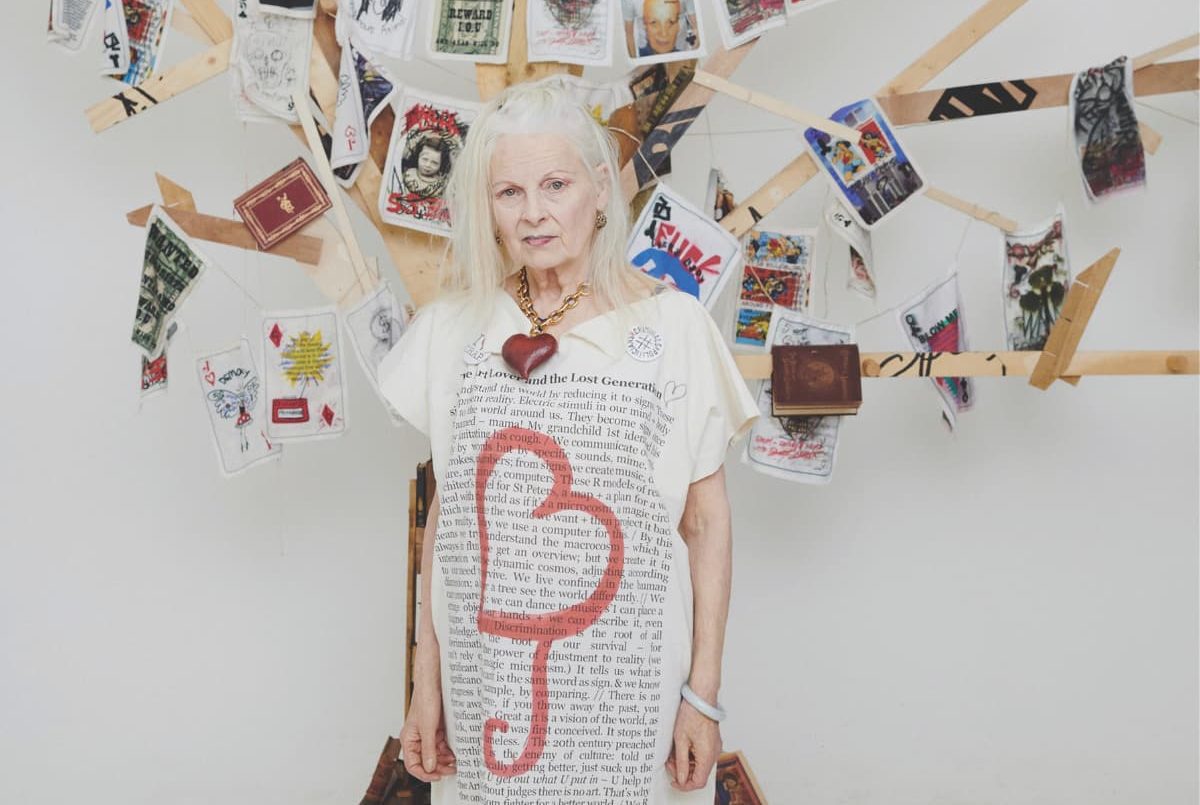 Whether they’re campaigning about climate change, shining the spotlight on sustainable style or highlighting the fragility of our ecosystems, The Glossary’s Eco Pioneer series gets to know the game-changing women who are on a mission to save the world. Here, legendary designer and eco-warrior Dame Vivienne Westwood explains how she’s using her platform in the fashion industry to fight for our future.

Dame Vivienne Westwood has never done things quietly. From her seminal fetish shop ‘Sex’ on the King’s Road to collecting an OBE from the Queen at Buckingham Palace whilst wearing no underwear, the self-styled queen of punk has forever ripped up the rulebook. This rebellious streak extends to her beliefs. Bold, radical and always unique, Vivienne uses her collections and catwalk shows to campaign for positive activism; as far back as spring/summer 2016, she criticised anti-terrorism laws at Paris Fashion Week, while her latest show in London tackled everything from Brexit and free speech to global-warming. “All my motivation has been because I have been so upset about what can happen to people in the world,” she explained.“That’s had something to do with my fashion clothes.”

It is environmental issues which the outspoken septuagenarian, who was made a dame in 2006, holds most dear to her heart, for decades mobilising international attention around the ecological crusade and tirelessly speaking out about climate change. “I first realised about the catastrophic problem of climate change when I read James Lovelock’s works on the Gaia theory,” she says. “His guess was: only one billion people left by the end of the century. The earth behaves as if it’s human and it self-metabolises; though it’s moving nearer to the sun it manages to balance its temperature because its life forms adjust, and we must adjust in relation to this biodiversity which we’ve completely ignored. We have to learn to live in harmony with the earth”.

Whether distributing her Climate Revolution Charter amongst the fashion crowds at a show (“Climate crisis and economic crisis are like serpents who eat each other’s tail”; “We have wasted the earth’s treasure and we can no longer exploit it cheaply”; “Cut out plastic whenever possible”; “Tackle the need for clean energy”…), driving a tank to David Cameron’s house in an anti-fracking protest or standing on the back of a London bus with a microphone rallying people to convert to eco-friendly energy, Vivienne cares deeply about helping to change the world.

Who can forget her appearance at the London 2012 Paralympics dressed as Queen Boudicca, inaugurating the “Climate Revolution” with an enormous banner? Two years later, she famously shaved off her trademark red locks to raise awareness. “Vivienne cut her hair as we must all wake up to Climate Change,” a spokesperson for her fashion label said at the time.

She is – and always has been – vehemently anti-consumerist. “We are dangerously short of culture; trained up as consumers and not thinking,” she warns. “Beware of Propaganda! Its greatest evil is Non-Stop-Distraction. It’s no good to just go to a shop and come back with bags and bags of cheap t-shirts. Thoughtless consumption is not a real choice. Andreas [Vivienne Westwood’s Creative Director, Design Partner and husband] once said to me that if everyone just bought beautiful things that they thought about and really loved then maybe we wouldn’t have this problem of climate change. My motto is ‘Buy less, choose well, make it last!’”

Vivienne is fearless in her campaigning, going to great lengths to rally charities, NGOs and individuals to join forces and take action. Over the years, she’s worked with the Environmental Justice Foundation, Friends of the Earth, Greenpeace, and the United Nations, taking a stand on issues including fracking, drilling, industrial fishing and, a particular passion of hers, deforestation. Both Vivienne and Andreas are patrons of the rainforest charity Cool Earth and in 2013 they spent a week living with a tribe in the Peruvian rainforest, before lobbying the Peruvian government on their Forestry Programme. They also put their money where their mouth is – to date, fashion’s most eccentric couple have donated over £1.5 million to the charity.

Despite her 78 years, Vivienne continues to be a woman on a mission. “I get credibility from doing the fashion, which helps me as a propagandist, gives me a voice. People will listen to you. That’s one reason I think it’s important to carry on,” she has said. “The Revolution is already begun. The fact of man-made climate change is accepted by most people. Through every walk of life people are changing their values and their behaviour. This continues to build the Revolution. The fight is no longer between the classes or between rich and poor but between the idiots and the eco-conscious”.

“It’s a war for the very existence of the human race. And that of the planet. The most important weapon we have is public opinion: go to art galleries, start to understand the world you live in. You’re a freedom fighter as soon as you start doing that.”

A version of this feature was originally published in the Spring 2019 issue of The Glossary.