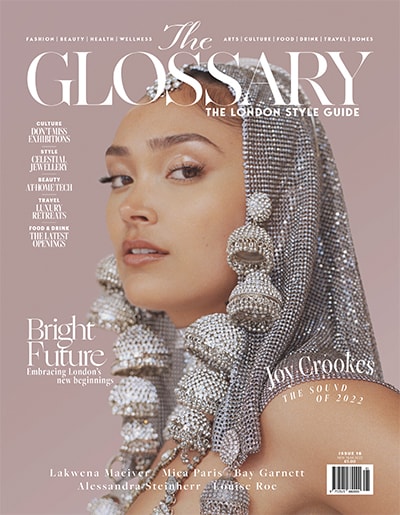 The best whisky bars in London for Burns Night

From Scotland to Japan, there’s a whole world of whisky to discover, and London just might have the best dens to sip a dram.

Whether you’re a pure aficionado, or prefer the pull of a rare cocktail mix, whisky cures all. The Scottish national drink fuelled the lines of William Faulker and Dylan Thomas and gave Sir Winston Churchill respite from wartime troubles. Frank Sinatra was even buried with a bottle of Jack Daniel’s Old No.7 when he passed away in 1998. But it’s not just the men who made a mark on the whisky industry: Marjorie Samuels was the brains behind the Maker’s Mark brand and its now iconic red dripping wax seal; Jessie Roberta Cowan (Rita Taketsuru) earned the moniker ‘The Mother’ of Japanese Whisky; and Ellen Jane Corrigan turned Bushmills into the international company we know today.

London is home to some of the oldest whisky bars, with several hosting hundreds of bottles in their collections. But the Scottish spirit is also experiencing a renaissance – just in time for Burns Night, which falls on Saturday 25 January. A new wave of whisky specialists is popping up across the capital with female distillers, master blenders and founders at the forefront. From traditional drinking dens to exclusive establishments championing the amber drink, we raise a lowball to the best whisky bars in London. 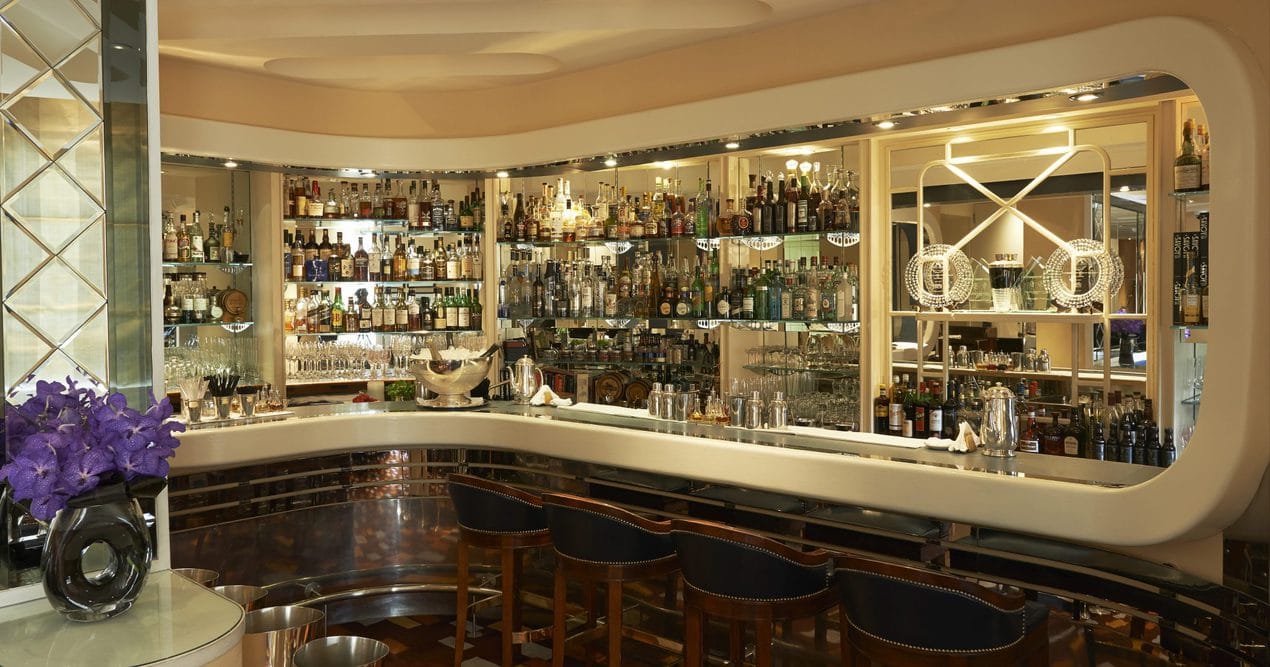 As London’s longest-standing cocktail bar, you would expect The Savoy’s American Bar to know a thing or two about whisky. It’s rumoured that Churchill kept a private stash at the bar here under lock and key, and the luxurious drinking hole holds some of the world’s rarest 48-year-old Macallan whiskies. Why not try one of the hymns from the Savoy Songbook, a collection of cocktails inspired by films from decades gone by? The Heartbreak Hotel-inspired Lonely Street pairs a 17-year-old Craigellachie single malt with white port and mezcal, for a smoky-sweet affair that comes in at £50. 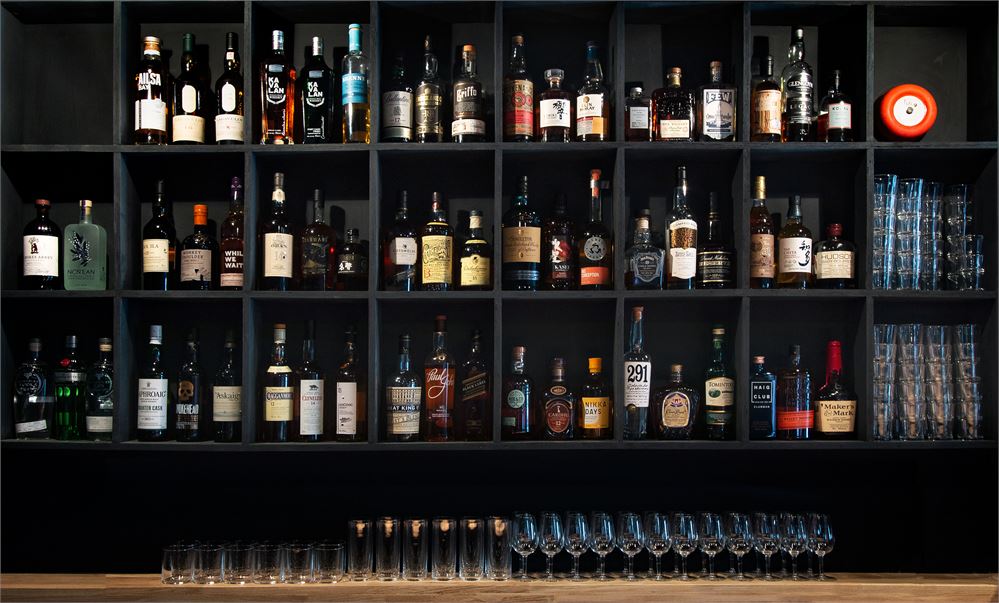 Black Rock doesn’t have a bar, as such. This subterranean sanctum in East London is paving an avant-garde alternative to old-fashioned drinking dens. The ‘bar’ instead hosts an 18-foot English oak in the middle of the room, halved and carved such that two channels of water and whisky run through its core with taps at regular intervals. Black Rock’s collection boasts over 250 bottles of the amber drink and a curated whisky-only cocktail menu, making it top choice for trying an extensive range of flavours and regions this Burn’s Night. 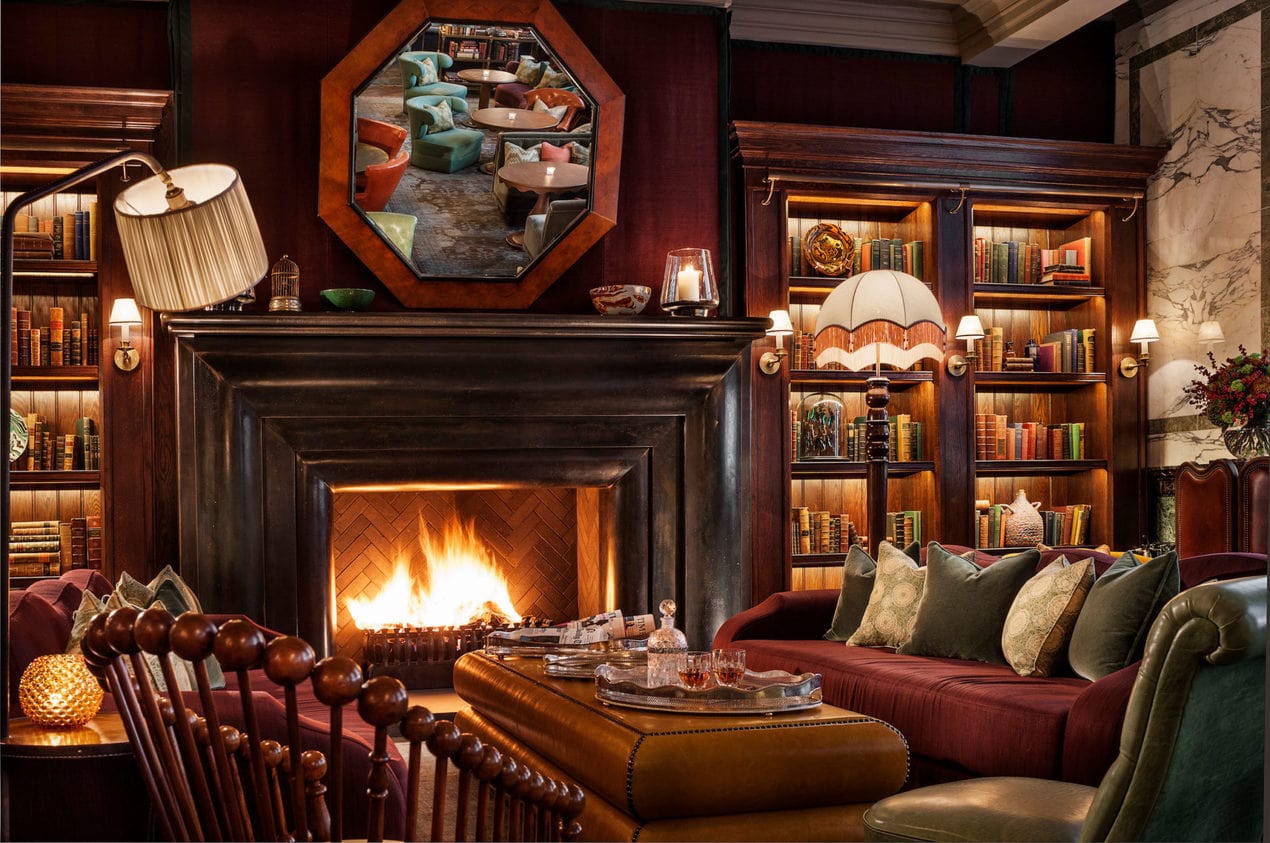 The sophisticated and elevated Scarfes Bar – beautifully designed by Martin Brudnizki, who recently renovated Annabel’s – is home to over 500 whiskies within its ‘Whisky Wall’. The range of inventive and playful cocktails is inspired by music genres, from the Soul section’s sweet ‘Memphis Punch’, a heady mix of Maker’s Mark Scarfes Select, BBQ, grilled corn, clarified milk, kola and marshmallow, to Hip-Hop’s ‘Poetic Justice’, a characterful cocktail of Chivas Mizunara, tonic wine, Sassy Small-Batch Cider, maple wood and hazelnut. For those who prefer their whisky straight, its extensive list is broken down by region and the well-informed staff are always on hand to guide you and your taste buds. 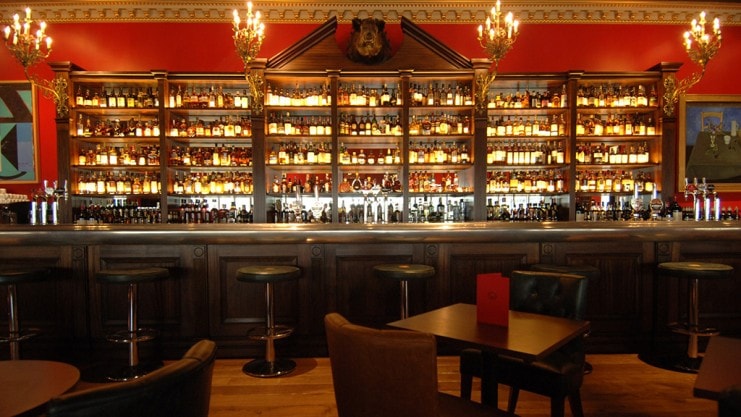 Boisdale’s Canary Wharf location plays host to an Oyster Bar, Jazz bar and Whisky bar, spread over two floors. It’s on the second floor that you will find the 12-metre ‘amber wall of liquid gold’, that holds more than 1,000 bottles of malt whisky. The extensive Scotch menu and wide range of regional and global distilleries stocked make it a mecca for whisky purists – particularly on Burn’s Night – and its private membership hosts regular whisky tasting evenings. Why not stop by for one of the famed Jazz evenings, or a cuban and whisky overlooking the London skyline? 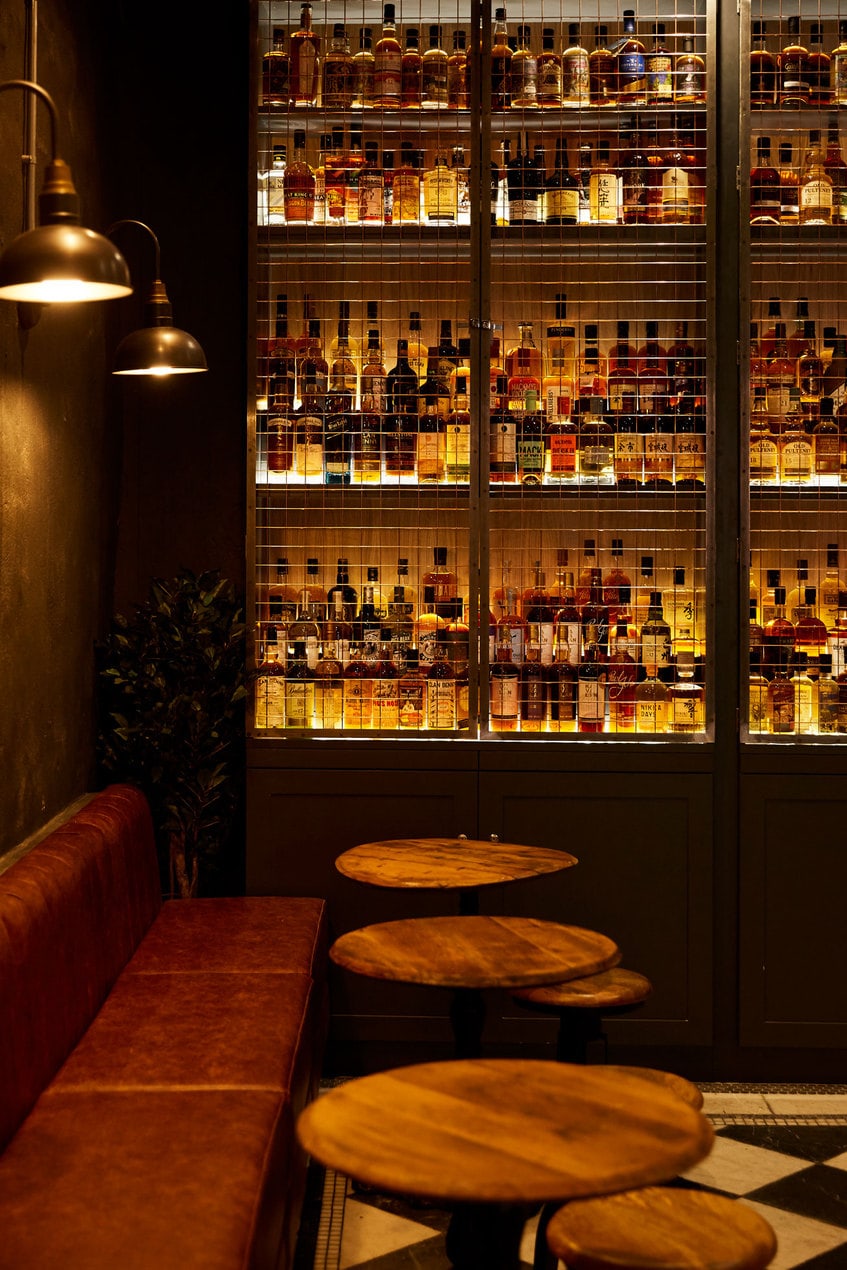 The newly opened Spitalfields outpost hosts a 1000-strong collection showcasing the best whisky from around the globe. From scotch from the Highlands, Lowlands and Speyside and American whiskey from across the pond to Asian, European, Australian and South African offerings, you’re sure to find a flavour that hits the spot. Or ask the knowledgeable staff for recommendation if you’re overwhelmed by the options. For pure devotees, the first floor is home to The Dram House; a private members’ club for loyal customers and whisky connoisseurs, complete with a bar that offers an exclusive selection and tasting opportunities. 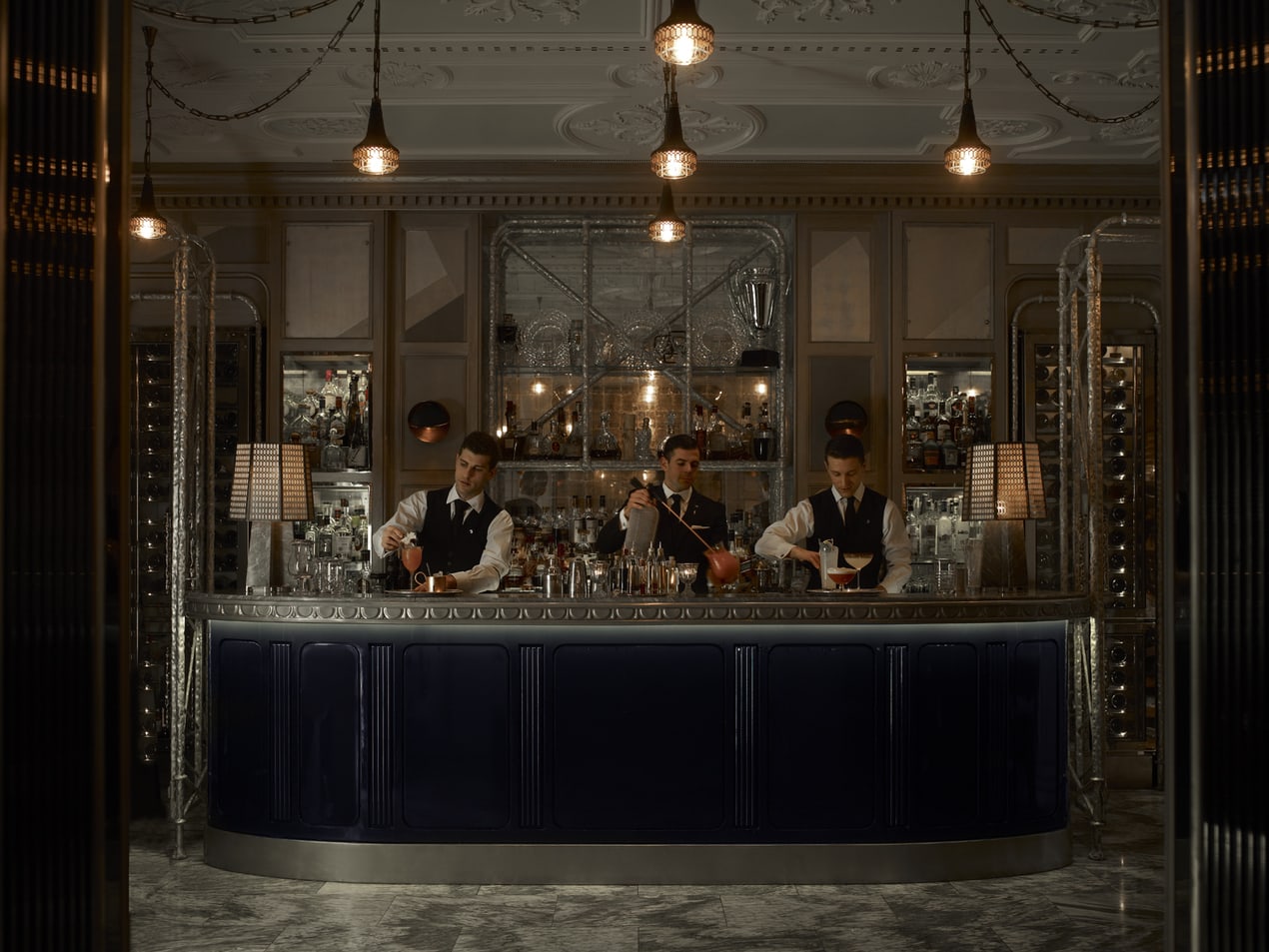 Named ‘The Best Bar in Europe’ in The World’s 50 Best Bars 2019 The Connaught Bar’s glossy arches lead to a quintessentially British bar that has stood the test of two decades in the capital, to come out on top time and time again. It has some of the finest champagnes and wines in its collection, as well as four pages of Scottish, Irish, American and Japanese whiskies in its extensive menu. But the real star is the exclusive Connaught Cask whisky, finished in cabernet sauvignon, port and sherry barrels to give it an inimitable flavour. 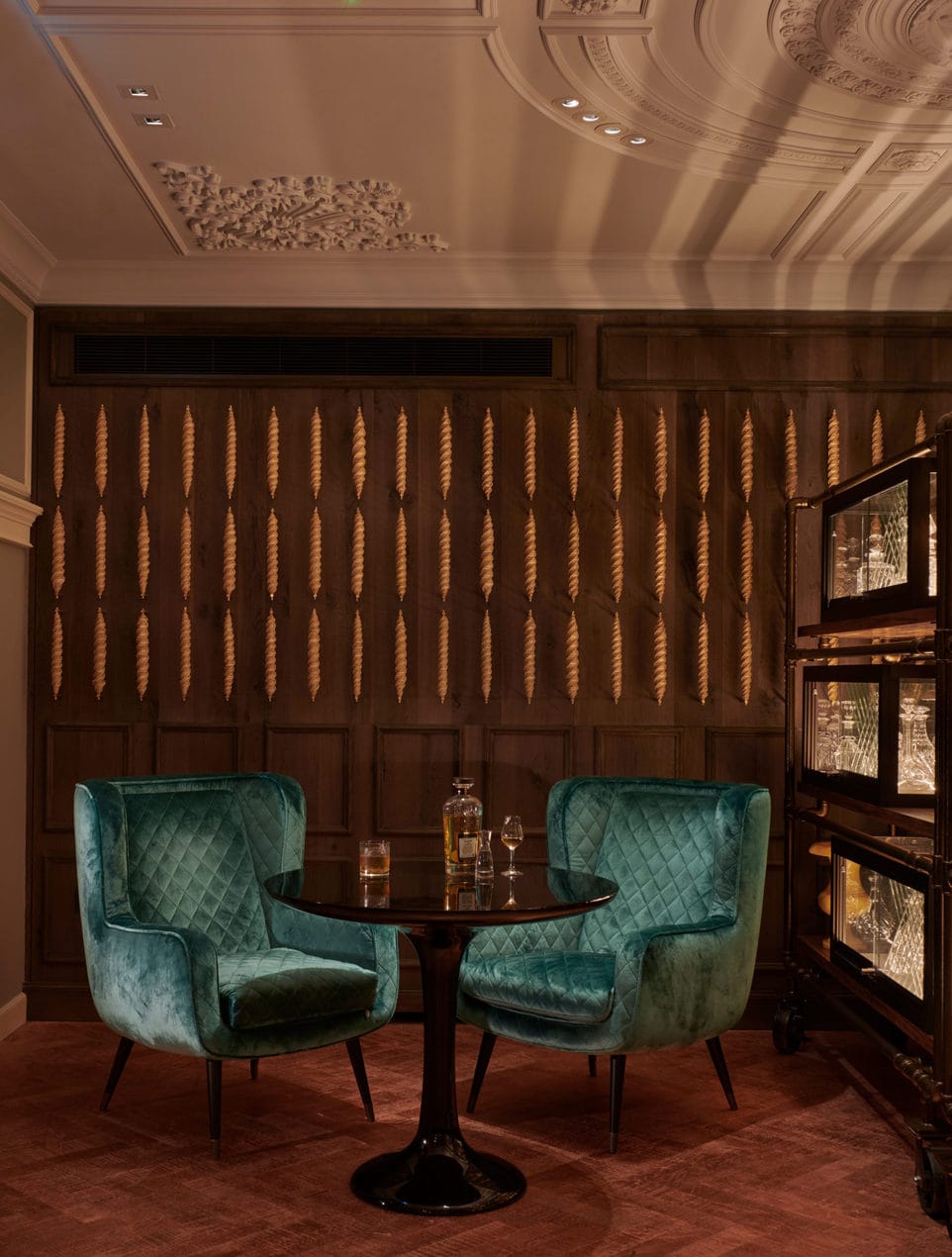 The newly opened Great Scotland Yard hotel pays homage to the storied history of its location, and holds two restaurants, a tea room, and a hideaway bar. Inspired by the illicit anti-establishment Irish bars at the turn of the 17th century, from which it takes its name, Síbín is an elegant, speakeasy-style bar hidden behind a secret door. With a varied selection of carefully curated and ever-changing rare whiskies from all over the world on is offer alongside dedicated food pairings. The bar menu features a mix of classic and antagonist-style whisky cocktails. 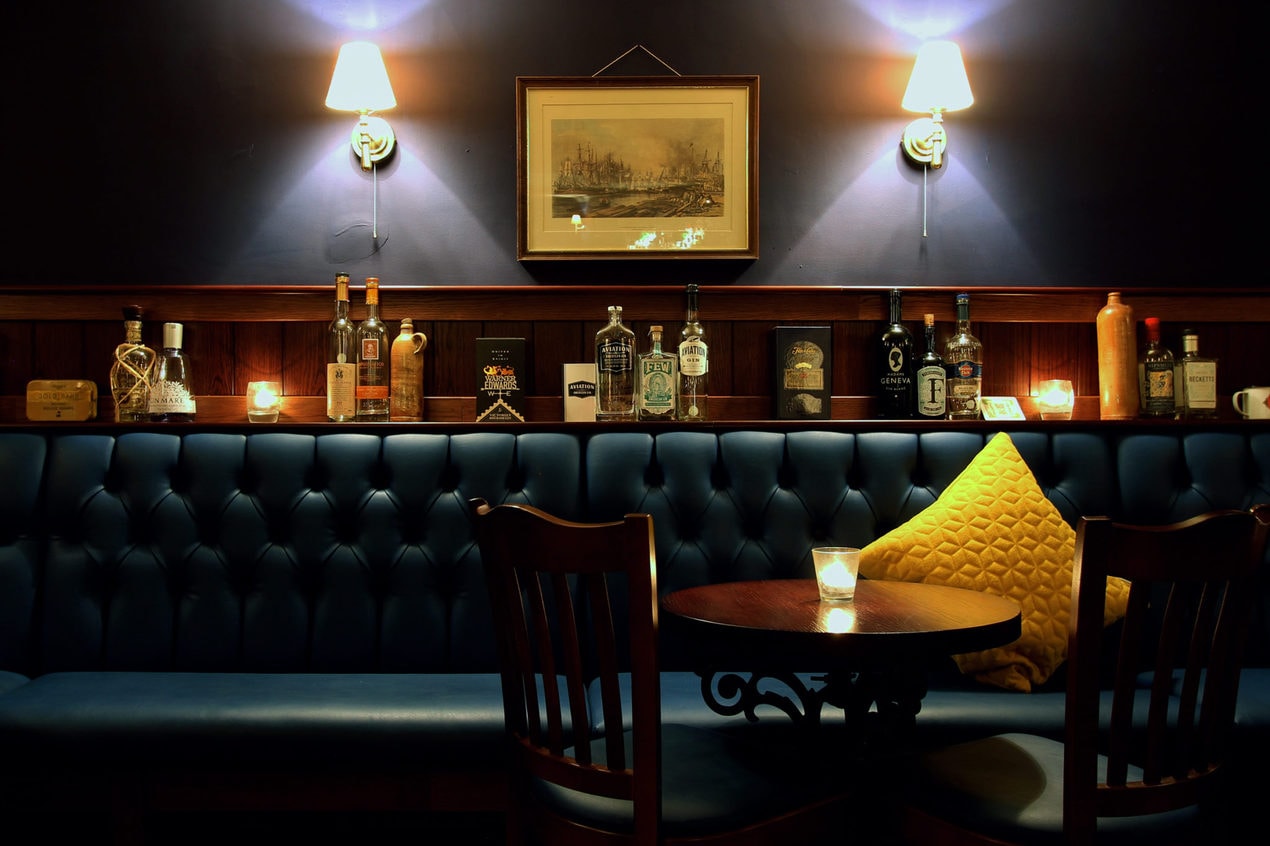 Despite a luxurious decor – velvet emerald furnishing, dark wood and polished marble table tops – Merchant House is an unassuming, intimate den that’s ideal for escaping City life. A 600-bottle strong collection of whiskies line the walls, with many from the fertile lands of Ireland and the Scottish coastline, plus a variety of American bourbons and Japanese distillations too. Its cocktail menu is an ode to tales from across the globe. ‘White By Night’ is a combination of poitín, coffee, tonka and egg white.