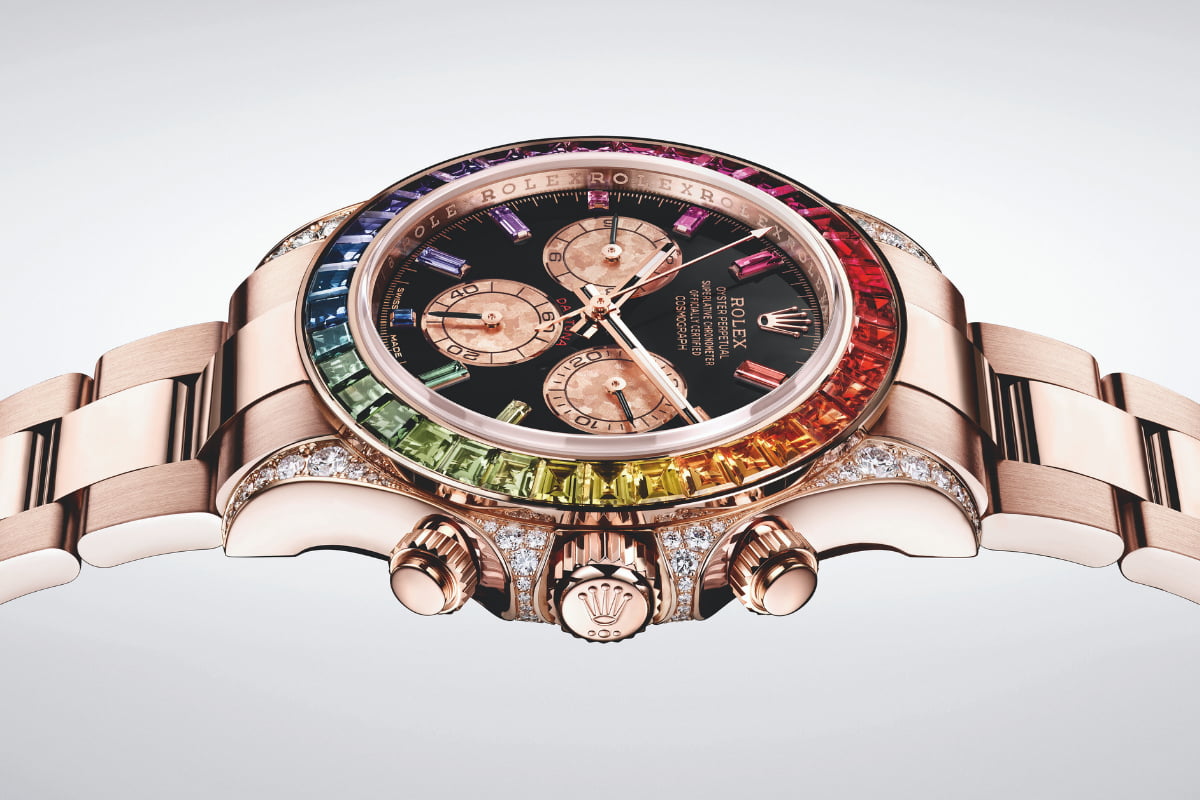 The innovative new women’s watches changing the face of time

More luxury brands are crafting women’s watches that rival men’s designs rather than mimic them. From Dior’s lunar-inspired masterpiece to Hublot’s clear-cut innovation, discover the female-focused timepieces that are changing the face of horology.

If there is one overall conclusion to be drawn from this year’s two top watch trade exhibitions – Baselworld and Geneva’s Salon Internationale de la Haute Horlogerle (SIHH) – it’s that women’s luxury watches are no longer the poor relation. In a market that has proved tricky over the past couple of years, they’ve outperformed men’s in terms of sales growth – and nothing concentrates a brand’s mind better than this.

It’s no longer enough to offer women a downsized version of a men’s design, obligatory diamond bezel attached, and probably with a cheaper quartz movement instead of a mechanical one. Women too enjoy the sense of craft that comes with a handmade movement, and the more they learn, the more interested they become in the higher echelons of horology and the complications it entails. To meet this demand, at Basel Bulgari launched the discreet Diva Finissima Minute Repeater, which has the world’s thinnest repeater movement beating inside, while at SIHH Jaeger-LeCoultre revived the 101 (the smallest mechanical movement ever, designed in 1925) with a jewellery watch that is phenomenally expensive for its tiny size but much appreciated in connoisseur circles.

At SIHH, which is put on by The Richemont Group, prestigious jewellery watch brands such as Cartier, Piaget and Van Cleef & Arpels exhibit alongside an increasingly influential group of small independent watchmakers. Basel is bigger and perhaps more masculine, although top brands in the Swatch Group (Breguet, Harry Winston) plus jewellers Bulgari, Chopard and Chanel, appear committed to the female market, as are the more experimental Hublot and TAG Heuer. There’s also a big effort on well-priced feminine mechanical movements: standouts include Nomos’ square Petit Four, inside which sits a slender, circular movement; Rado’s True Thinline Nature collection, which mixes ceramic with mother-of-pearl; and Frédérique Constant’s Amour Heart Beat, its first women’s automatic, complete with a double heart-shaped “window” on the movement.

In fact, movements have become something of a micro trend. Chanel specially designed a modernist skeleton movement for the Boy.Friend, Bulgari went for a witty skeletonised dial featuring its deconstructed logo for the Lucea, and Audemars Piguet chose a partially showing movement with an open window to the escapement for its Millenary collection.

Many women also love the look of a moon phase that follows the lunar cycle, but now the space race goes further. Dior’s 36mm VIII Montaigne Clair de Lune turns the watch face into a lunar surface by creating a moonscape of tiny, textured gold threads, while Van Cleef & Arpels’ female version of the men’s Planetarium not only shows three planets as gems rotating around the gold sun in real time, but includes a diamond moon circling earth.

Colour, too, has a new importance in women’s watches – and we don’t just mean the greens of Glashütte’s 60s-style Panorama Date or the red, green or black of Cartier’s Révélation d’une Panthère. We’re referring to the rainbow hues as seen on Rolex’s baguette-bezelled Rainbow Daytona, Hublot’s crystal-cased Big Bang Unico Sapphire or Harry Winston’s Premier Candy.

By contrast, pure white diamonds are also having a watch moment, such as on the evening versions of Omega’s new point-of-entry Trésor and on Grand Seiko’s textured-dial, diamond-bezel automatic. Sportier diamonds float free in Chopard’s seaworthy Happy Sport, but the fast-growing area of women’s sports watches also includes examples of vintage elegance, like Patek Philippe’s hand-wound chronograph or Cartier’s Panthère with its triple gold bracelet. It all signals an increasing breadth of choice that men have always expected and women can finally revel in.

Read on for some of our favourite new styles. 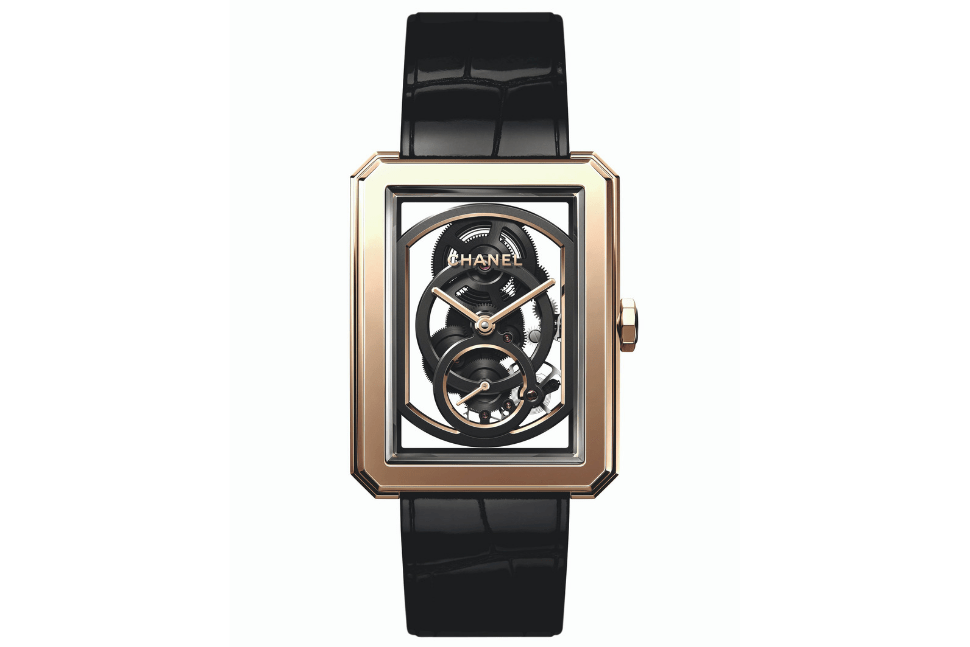 The couture house is a serious watch manufacture, too. Its latest movement, specially designed for the Boy.Friend, helps you see what drives the watch and feels more feminine than most modern skeleton designs. 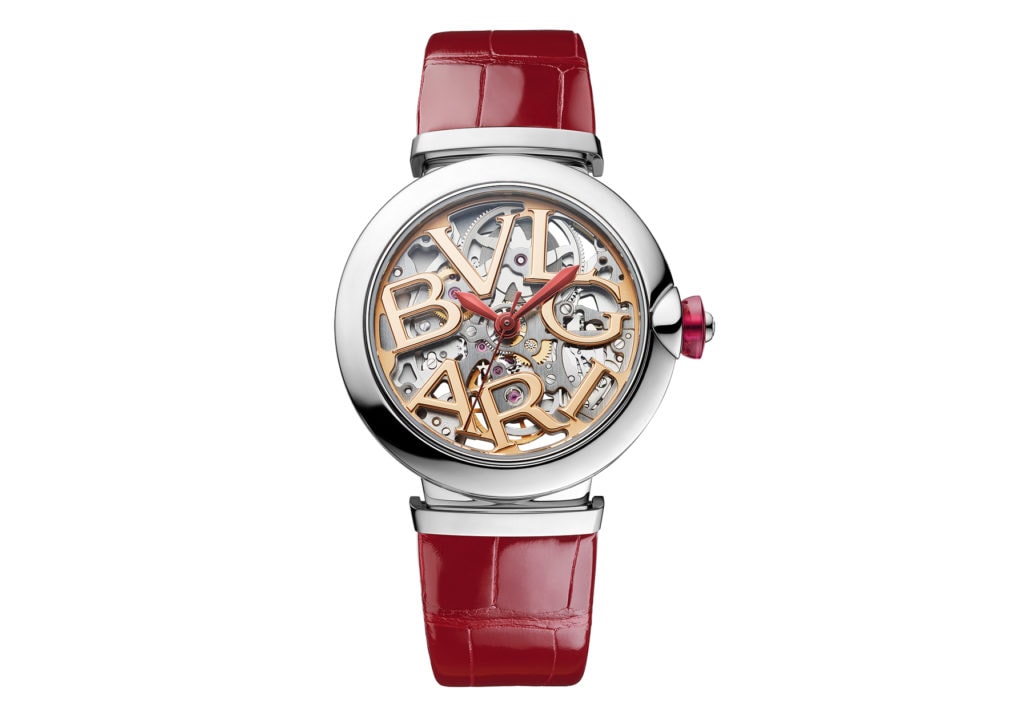 The lovely Lucea features the scrambled but readable letters of the brand’s logo layered over a finely cut skeleton dial with red hands that match the ruby crown. Playful and sophisticated, it’s a feat of top-quality watchmaking. 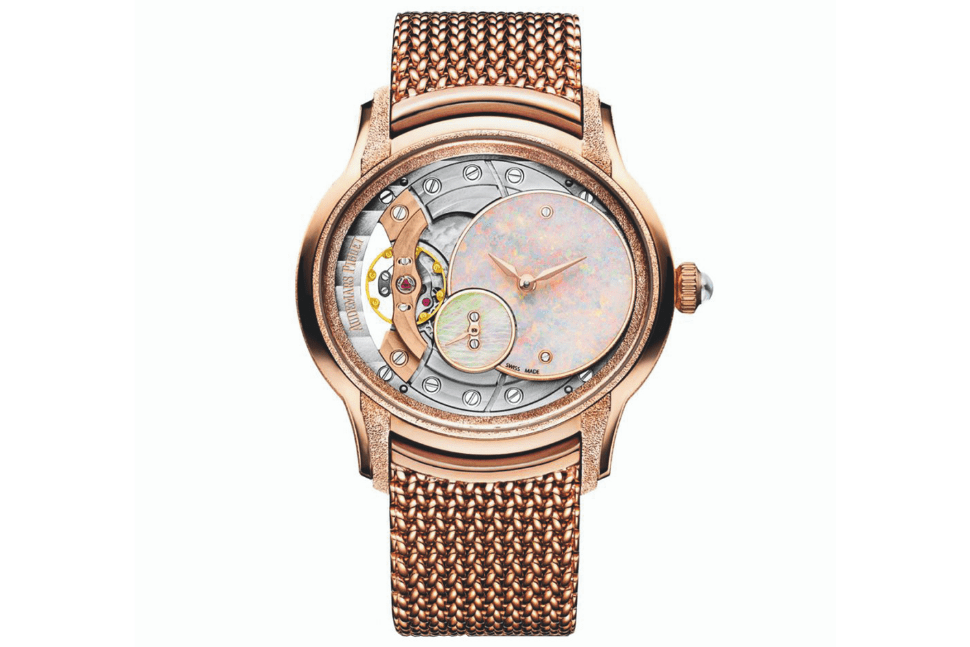 A stunning variant of the distinctive elongated oval model, the open movement means you can watch the two mesmerising dial discs of white opal at work. A hammered gold case that sparkles like frost and a complex Polish weave bracelet are the finishing touches.

The new model, with its distinctive large numerals, justifies a quartz movement as an occasional-wear evening watch. Slender and elegant, the dressiest, limited-edition versions feature diamond baguettes and brilliants on shimmering white mother-of-pearl.

This is a feat of high craft as well as watchmaking. Three planets on concentric rings of sparkly aventurine rotate around the engraved gold sun in real time and a diamond moon circles the earth while a white gold comet shows time. 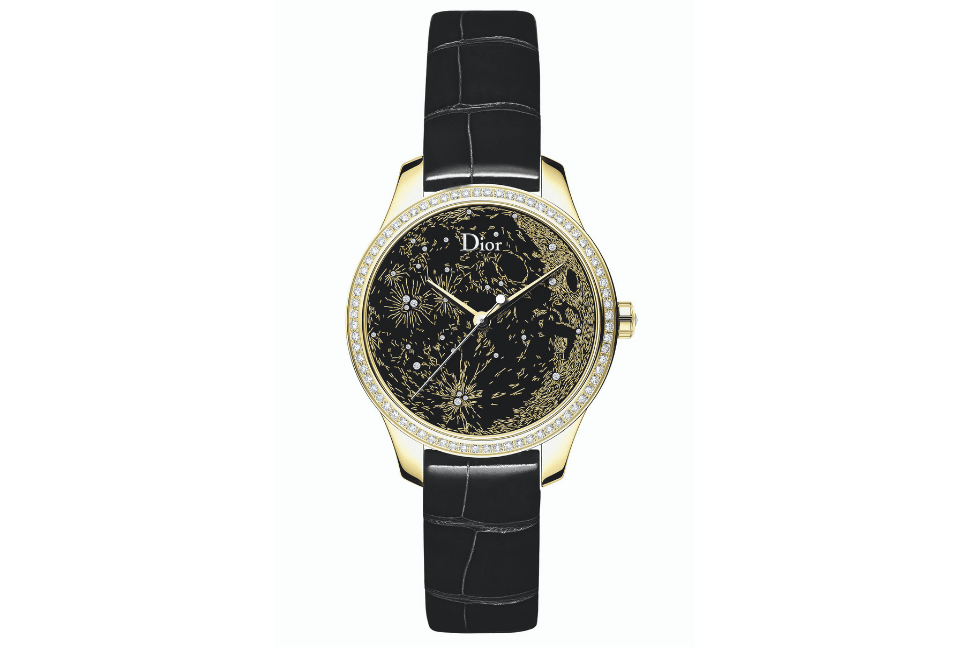 This is designer Maria Grazia Chiuri’s mysterious evocation of the moon in watch form. It features tiny gold threads that are microscopically welded to the dial to create an impressionistic lunar landscape while scattered diamonds reflect the stars beyond. This season’s glitziest gemstone and diamond watches to sparkle in

As much a piece of jewellery as a watch, its flexible and sinuous gold bracelet links to a quartz-powered mini version of the 80s Panthère, itself derived from the aviation-inspired men’s Santos with its riveted bezel. 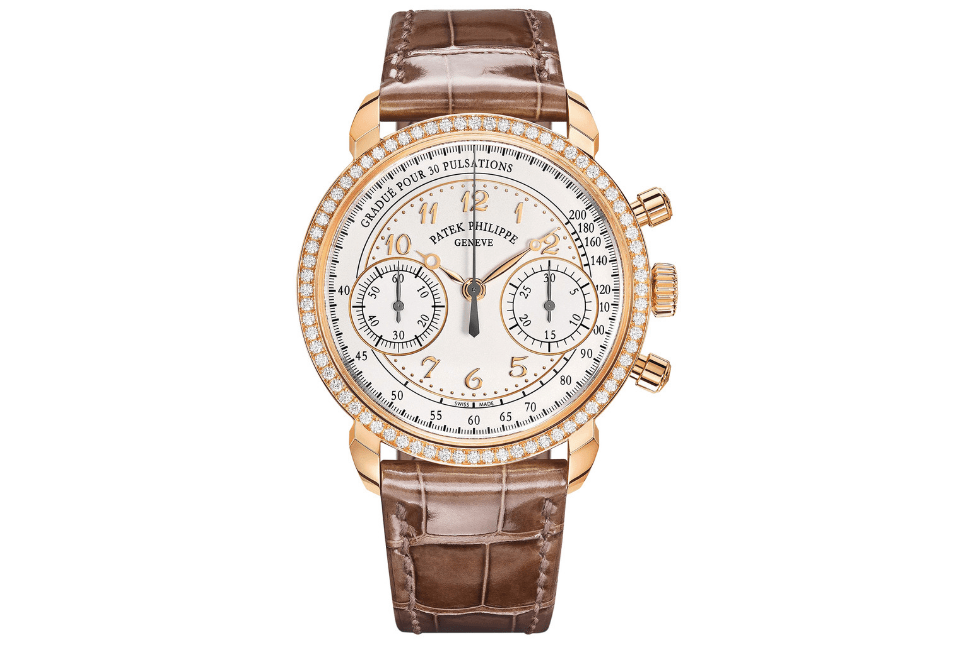 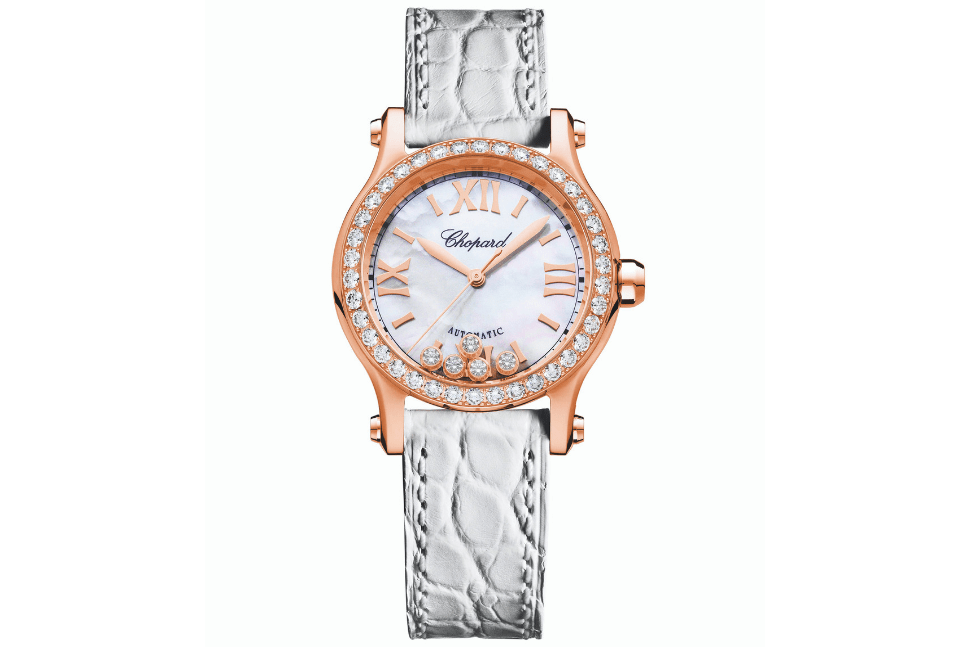 The 25th anniversary of this ground-breaking collection brings back the scarce oval model, elegant with seven free- floating diamonds and a diamond bezel – you can even swim while wearing it. 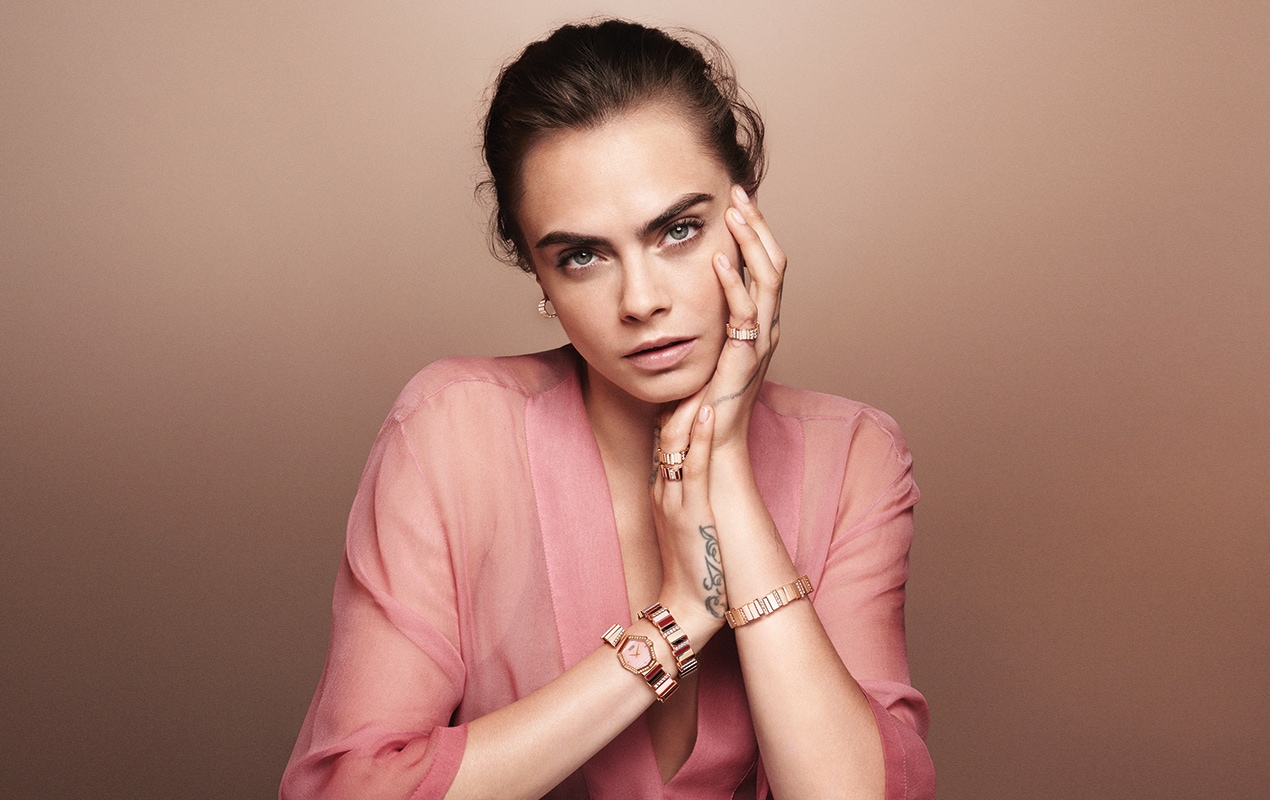 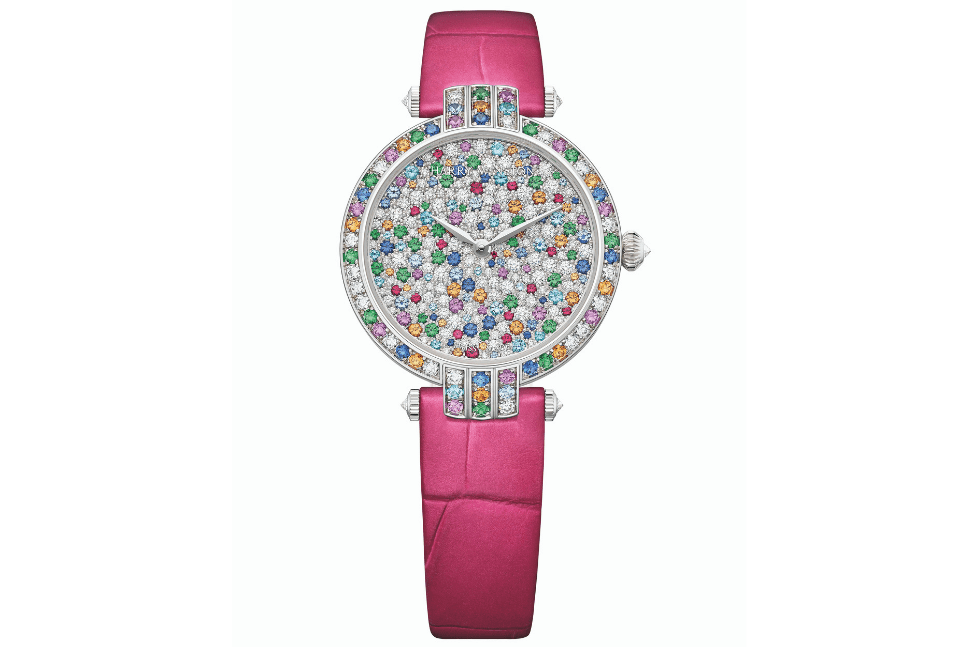 This simple style is all about the gem setting. Rare aqua-blue Paraíba tourmalines, orange spessartite garnets, red spinels, pink and yellow sapphires and green tsavorite garnets mix with diamonds like precious hundreds and thousands, extending to the bezel and signature triple lugs. 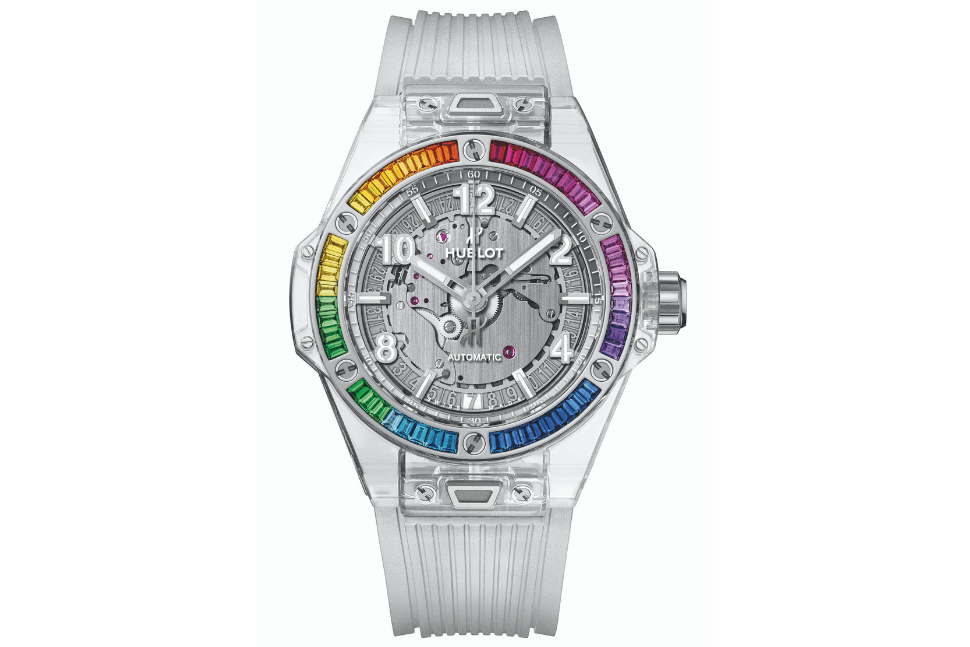 In this instance, sapphire refers to the whole transparent case and bezel, to which the brand has added an openwork dial and a clear composite strap for an exercise in pure light. 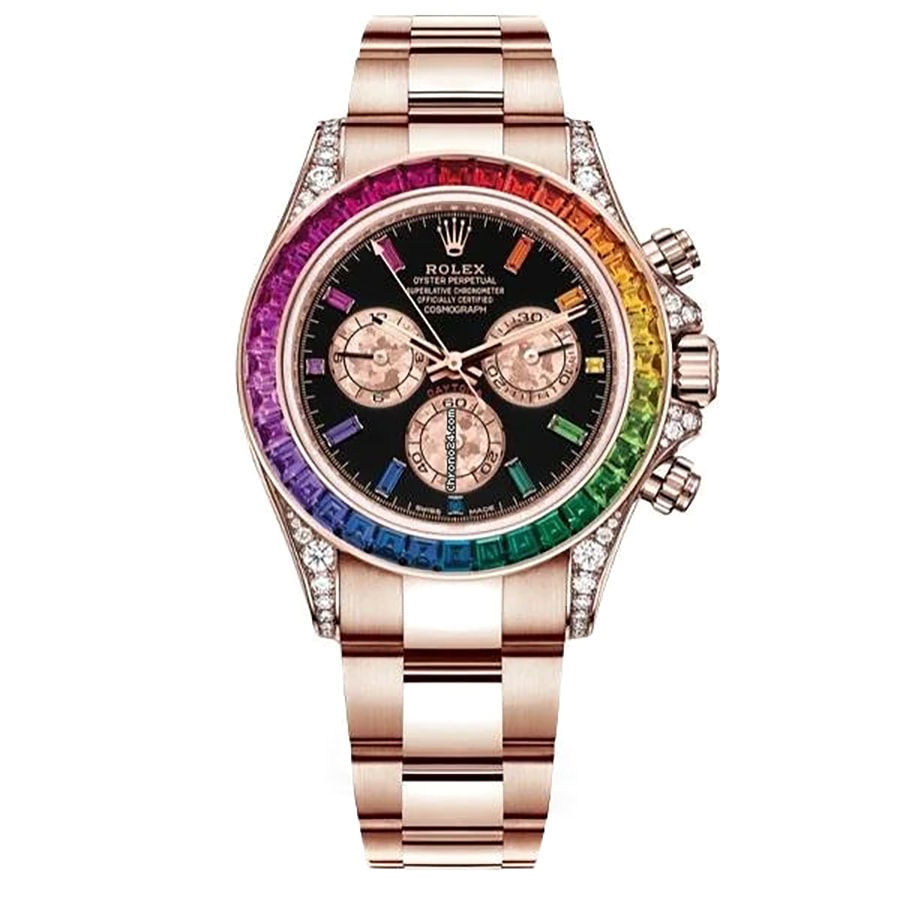 The brand’s most iconic model gets a colourful makeover with a finely shaded rainbow of sapphire baguettes on the bezel and hour markers with diamonds on the lugs and pushers.