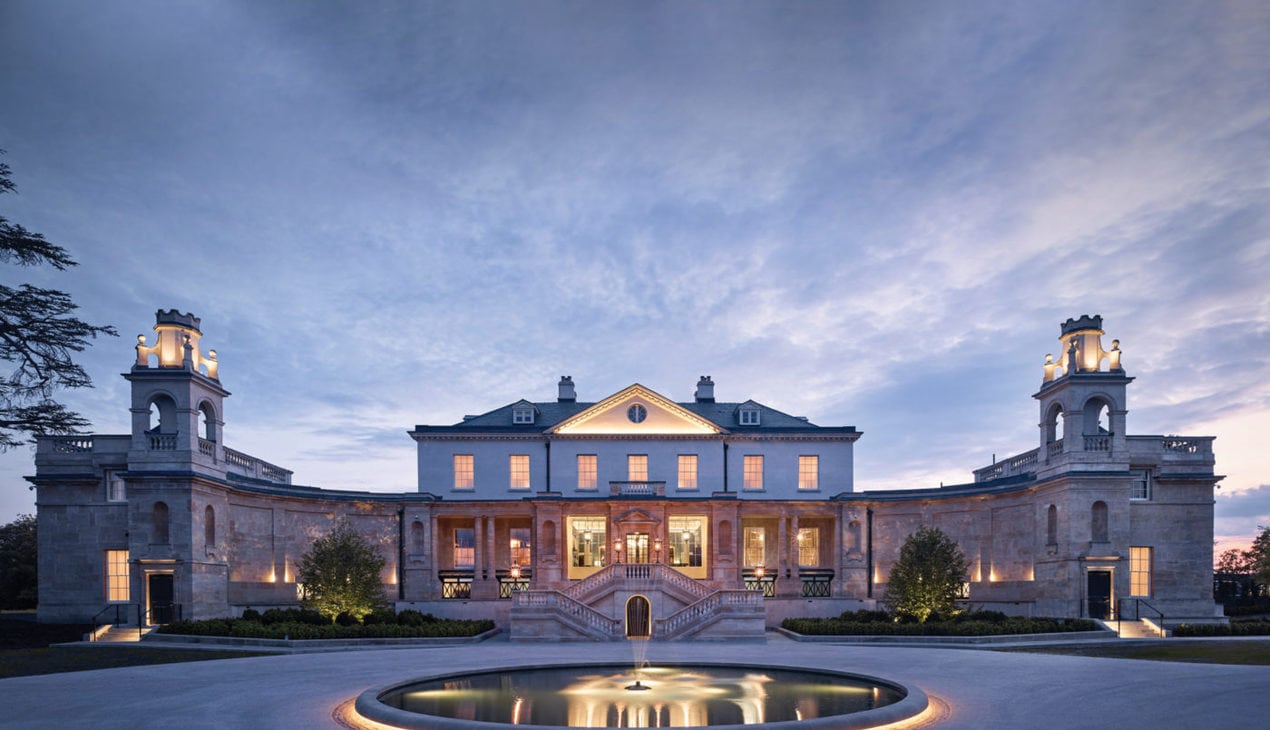 From a private island on the Thames to a horticultural haven in Somerset, check in to one of the UK’s buzziest new countryside hotels.

Whether you’ll be getting stuck in to outdoor pursuits or working your way through the spa menu, a reinvigorating weekend in the country is always a good idea. Discover the chicest places to stay this season with our guide to the UK’s most beautiful new countryside retreats.

It took six years and a multi-million-pound budget, but the renovation of The Langley, the former country estate of the third Duke of Marlborough in the heart of Buckinghamshire, has been worth the wait. The sweeping driveway, grand stone façade and double staircase leading up to the front door all make for a majestic arrival. Inside, the entrance hall’s mosaic floor, gleaming chandeliers and plush wingback armchairs set the tone for modern country glamour. The hotel’s bedrooms are split between the Duke’s former hunting lodge and adjacent 18th-century Brew House. Rooms in the latter have a more rustic aesthetic, while the ones in the main house offer contemporary cosiness. All reference the richness of the property’s past, with specially-designed furniture and elegant touches such as Hermes toiletries in the indulgent bathrooms. Not to mention glorious views of the lake or park, especially from the most opulent room, The Duke of Marlborough Suite.

While the setting is enough of a lure, the spectacular subterranean spa – featuring a next-level treatment menu by Sisley and others pioneering brands – steals the show. Combining striking design with first-class facilities, hours can be lost in this 1,600 square meter wellness hub with its marble-lined 16-metre pool, extensive thermal area, five treatment rooms, private VIP suite and state-of-the-art gym with Matt Roberts personal training facility.

Upstairs in the Cedar restaurant, food is seasonally driven and meticulously presented, fusing influences including Italian, Peruvian and Japanese, and the neighbouring Drawing Room is the ideal setting for afternoon tea. Then, of course, there’s the Churchill Bar, which is made for winter nightcaps – and Instagram.

The spa treatment to book: The Langley Signature Hammam Ritual. From the full-body exfoliation and skin-nourishing rassoul honey wrap to the spine-tingling hair wash and top-to-toe massage using the spa’s signature blend of shea butter and organic oils, it’s 150 minutes of pure bliss.

The only way to reach Monkey Island is walking over a little pedestrian bridge, while staff – who appear as if by magic – look after your luggage. This tiny private island, perched on a sleepy stretch of the Thames in Bray, started life as a fishing retreat for the Duke of Marlborough in the early 18th century and has long been the playground of a cosmopolitan crowd. Some 300 years later, and after extensive refurbishment by hotel titans YTL, the two Grade I-listed pavilions have reopened as a boutique bolthole.

Monkey Island’s restaurant, in a gleaming white Palladian building, is overseen by Will Hemming, formerly of The Savoy and Simpson’s in the Strand, who eschews tasting menus for a concise list of dishes incorporating island-grown and Berkshire produce, while the solid wine list takes the new world as seriously as the old world. Afterwards, take your digestif in The Monkey Room and marvel at the playful primate-inspired 17th-century frescoes.

The well-appointed rooms are a stroll away, either attached to the Temple or in a converted barn, surrounded by manicured gardens overlooking the river. The star of the show is the Wedgewood Suite, with its intricate blue and white hand-plastered ceiling, a dressing room and a window seat with its own whisky stash (Monkey Shoulder, naturally).

Pleasingly, you can’t escape the water here and it’s been used to full advantage at the island’s spa, which is housed on a barge bobbing on the shoreline. Inspired by the Apothecaries’ Barge, which was moored on the Thames in Chelsea in the 17th century, the treatments incorporate herbal remedies, botanical liqueurs and elixirs – and many use new British skincare brand Moss of the Isles. You’ll leave feeling very reluctant to walk back over the bridge and into the real world.

The spa treatment to book: The Monk’s Elixir is a 90-minute treatment which taps into the island’s monastic past (the island was once known as “Monk’s Eyot”). Begin with a tasting flight of botanical elixirs, before the deep tissue massage using house-made oils from herbs grown in the hotel’s Experimental Teahouse.

South African hoteliers Koos Bekker and Karen Roos spent six years transforming honey-coloured Hadspen House (the seat of the Hobhouse family since the late 18th century) into a hotel. The result is a suitable marriage of Georgian scale and contemporary finish and, while rooms are individually designed, the general feel is of Austen-era romance: four-poster beds, roll-top baths and low-slung beams. The Garden View Rooms are lovely, with idyllic vistas, fireplaces and complimentary mini larders; but our favourite has to be the Granary, a self-contained suite in the stable yard with exposed brick walls, a wood-burning stove and dove-coloured throws (perfect once the dark nights draw in).

The spa is done out in the same rustic register, with timber and brick massage rooms and an indoor/outdoor pool. It’s all so comfortable you might be tempted to stay inside, but if you do, you’ll miss out on 300 acres of formal gardens – complete with an apple tree maze – and gentle Somerset countryside, as well as clean-living country diversions like croquet, fishing, falconry and riding.

The estate is a working farm, so much of the produce is local and sourced on site. The Garden Cafe, a glass-fronted Grand Designs-esque structure that overlooks the orchards, uses ingredients from the eight-acre kitchen garden and aims for zero waste, while the Cyder Bar serves cider made with apples from the 3000 trees onsite, alongside sausage rolls and pastries from the hotel’s bakery. You can even top your breakfast porridge with a helix of honey from its very own bees.

The spa treatment to book: The 60-minute Apothecary Facial uses a blend of botanical oils on your skin to nourish and hydrate; it’s like falling asleep in a garden full of flowers.

Need to know: Rooms from £255 per night, based on two sharing on a B&B basis.